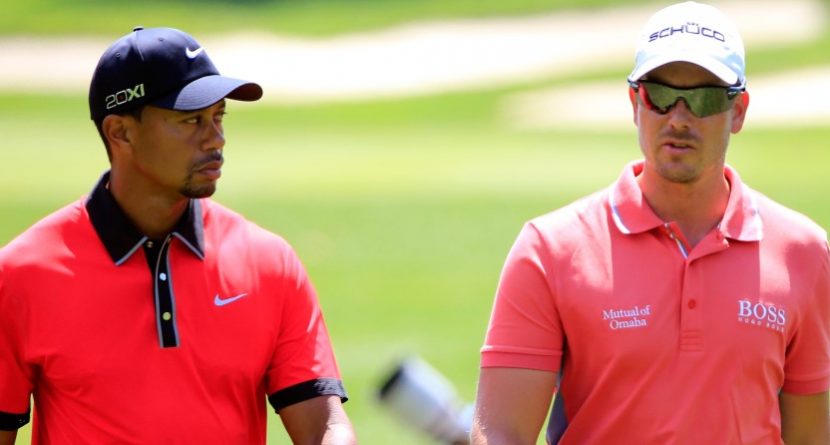 Maybe you heard: Tiger Woods is back. He’s set to compete at his first major of the year, the Open Championship at Royal Liverpool, where he won in 2006. And he thinks he can win again.

But the 14-time major winner’s group isn’t the only one to watch Thursday and Friday. Here are the 9 best groups you’ll want to keep an eye on, including Tiger’s:

Tiger Woods, Henrik Stenson, Angel Cabrera
4:04 a.m. ET Thursday; 9:05 a.m. Friday
Stenson is No. 2 in the world and has played his best golf this year in Europe. He could jump off the “Best Yet to Win a Major” list. Cabrera might be the most unheralded two-time major winner in history. He grabbed his first non-major PGA Tour victory a couple weeks ago, and a win in Hoylake would give him the third leg of the career grand slam. But really, this will be the most-watched group all week because of Woods. He hasn’t won a major since the 2008 U.S. Open, which he referenced this week as evidence that he can come back from injury and quickly win a major.

Rory McIlroy, Jordan Spieth, Hideki Matsuyama
4:26 a.m. Thursday; 9:27 a.m. Friday
A victory this week from anyone in this group would set off a frenzy. So much is different for McIlroy this year compared to 2013 that the 25-year-old might as well win his third major and start living up to the hype again. Spieth is weeks away from his 21st birthday, and his first major before that day would heap even more hype into his bag. And Matsuyama, at 22, could increase golf’s popularity exponentially in Asia should he become the first from that continent to win the Open Championship.

Adam Scott, Justin Rose, Jason Dufner
9:27 a.m. Thursday; 4:26 a.m. Friday
Full of major winners from last year, this might be the group most likely to produce the eventual victor. Scott is No. 1 in the world and would love nothing more than his second major to validate that title. Rose is the hottest in the world, collecting wins in his last two outings. And Dufner hasn’t shown the form that propelled him to the 2013 PGA Championship, but no one would be surprised if that sweet stroke of his got hot. Phil Mickelson, Bubba Watson, Ernie Els
9:05 a.m. Thursday; 4:04 a.m. Friday
Another group full of recent major winners, Mickelson is the defending Open champ, Els won in 2012, and Watson is the reigning Masters champ. Only Watson is playing well this year, though. He’s No. 1 on the PGA Tour money list, while Mickelson has yet to record a top-10 finish on tour. Els has slipped to No. 58 in the world after ending 2013 at 27.

Ian Poulter, Dustin Johnson, Jimmy Walker
4:37 a.m. Thursday; 9:38 a.m. Friday
Poulter and Johnson make our list of the “Best Yet to Win a Major” and Poulter would be thrilled to free himself of that burden in front of his home fans. The Englishman tied for third last year and placed second in 2008. Johnson’s best finish ever at a major came at the 2011 Open Championship (T-2). Walker’s never made the cut at an Open Championship, but he’s having a career year in 2014 with top-10s in the first two majors.

Martin Kaymer, Jason Day, Zach Johnson
8:38 a.m. Thursday; 3:37 a.m. Friday
After Kaymer’s dominating eight-stroke victory at the U.S. Open, could he become the first man since Padraig Harrington in 2008 to win multiple majors in a year? His best finish at an Open Championship is T-7 in 2010. Jason Day is another guy itching to get off the BYTWM list, and Johnson owns a Masters title from 2007, but he’s never really contended in a major since. Rickie Fowler, Sergio Garcia, Luke Donald
3:37 a.m. Thursday; 8:38 a.m. Friday
Another strong major-less group, and Donald, like Poulter, would love to claim his first on his homeland. He’s never finished better than T-5 in The Open. Garcia placed solo-second at the 2007 Open Championship, one of seven top-10 results in the event, the most of any major for him. Fowler, meanwhile, has two top-five finishes in majors this year, more than the rest of his career combined. His best at the Open Championship is T-5 in 2011.

Lee Westwood, Keegan Bradley, Ryo Ishikawa
9:38 a.m. Thursday; 4:37 a.m. Friday
The Englishman most due for his first major title is Lee Westwood, who owns four top-four results from the Open Championship. He held the 54-hole lead last year before tying for third. Bradley finished T-15 last year in The Open, his best result among his two appearances. Ishikawa is another young Japanese up-and-comer, and he’s looking for his first top-10 in a major.

Matt Kuchar, Graeme McDowell, Louis Oosthuizen
4:48 a.m. Thursday; 9:49 a.m. Friday
Kuchar is the only one sans major in this group, but he’s the best of the three. The most consistent golfer in the world, he leads the PGA Tour with nine top-10 finishes so far this year, including a T-5 at the Masters. His best result at the Open Championship is T-9 from 2012. McDowell has only one top-10 from the Open, and the same goes for Oosthuizen. The latter’s just happens to be his win from 2010.