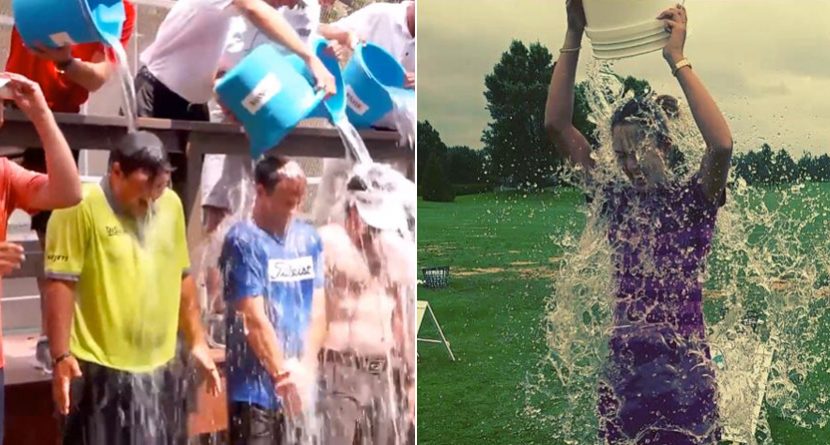 By now, just about everyone and their mom has taken part in the Ice Bucket Challenge – either a couple months ago when it was about donating to any charity, or the past few weeks when it got connected with amyotrophic lateral sclerosis (ALS). Love it (because it’s raising millions of dollars) or hate it (because it’s not raising millions of dollars for your favorite charity), you have to admit that these videos are highly entertaining.

The phenomenon first swept through the golf world in late June, and it made an emphatic return this week. That means just about every pro has taken part (except Phil Mickelson, who has been called out), giving us plenty of fodder to compile the best videos. Here are the 9 best:

Tom Watson: When it came time for U.S. Ryder Cup captain Tom Watson to soak himself, he issued a big challenge: his entire U.S. Ryder Cup team. That called for a big performance, and he delivered by filling up an entire tractor bucket with ice water:

The U.S. Ryder Cup team: Some of these gents had already taken part in the Ice Bucket Challenge. Rickie Fowler might have been the very first golfer to douse himself, but he gamely led his future teammates in accepting Watson’s challenge:

Harold Varner: It could be argued that some of these buckets included more water than ice. You can’t judge the temperature of water from a video. But Harold Varner clearly used a legit amount of ice, and took the challenge shirtless:

Jason Dufner: The Duf Daddy loves Auburn football. After he got called out by Auburn head coach Gus Malzahn, Dufner had the coach and some of his players dump a water jug on him, which had to make Dufner feel like a winning college football coach:

Blair O’Neal: She had a hand in making this thing go mainstream when she called out Greg Norman, who called out Matt Lauer, who did his challenge on the “Today Show.” But first, O’Neal earned bonus points for production quality with her GoPro video:

Luke List: He tried to be cute with barely a cup full of ice, then got doused with a trash can full of ice water:

John Mallinger: Props to Mallinger for going big and taking a bonus bucket for Brooklyn Decker. She eventually did the Ice Bucket Challenge, but for some reason didn’t mention Mallinger:

Michelle Wie: The Big Wiesy was a big part of the movement taking off on the LPGA circuit, and after taking her challenge, she just yelled down the range and called out Stacy Lewis:

BONUS: And we can’t complete this compilation without singling out our favorite Baba Booey golfer … for quite possibly the weakest Ice Bucket Challenge yet. We understand Keegan Bradley was in a hotel and the standard ice buckets that come in the room was all he had to work with, but that (over)reaction is like he got dumped on like his boy Dufner: