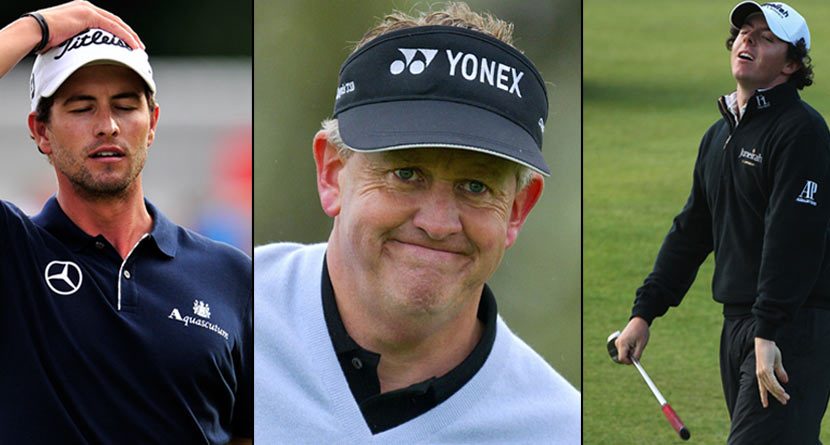 Last year, Phil Mickelson proved many of his critics wrong by winning the one tournament most thought he never would: the Open Championship. Before his triumph at Murifield in 2013, Mickelson would have been considered one of the best all-around players to never hoist the claret jug. Now, he’s just one very elusive win at the U.S. Open away from completing the career grand slam.

With Lefty’s win fresh in our memories, here’s a look at 9 best players who’ve never won the Open Championship.

Payne Stewart: 2nd/T-2 – 1985, 1990
Over the course of his illustrious career, Payne Stewart won 11 times on the PGA Tour, including three majors – most notably the 1999 U.S. Open. Stewart may have been criticized for his inability to finish off tournaments, but that wasn’t why he missed out on The Open. Stewart was a victim of circumstance in both his runner-up finishes. In 1985, he made a valiant final-round charge, falling by one stroke to Sandy Lyle. And in 1990, like the rest of the field, he was trounced by Nick Faldo. From 1985-1990, Stewart had just one finish worse than T-8 in the Open Championship (T-35, 1986).

Raymond Floyd: T-2 – 1978
Raymond Floyd was one of the most underrated players in history. Collecting four major titles and ranking 27th on the PGA Tour’s all-time wins list, Floyd missed the career grand slam by just one major: the Open Championship. Floyd did come close to capturing the claret jug a couple times, most notably in 1978. Floyd found himself one stroke off the lead after the first round, but stumbled to a 75 on Friday. He fought back with a final-round 68, but it wasn’t enough to catch Jack Nicklaus, who won by two.

Rory McIlroy: T-3 – 2010
Rory McIlroy might be a little young (25) to make this list, but with two major championships already to his name and a that famous bet his dad made, it’s a little surprising McIlroy hasn’t won The Open yet. In 2010, McIlroy opened with a 63 on Thursday and set expectations astronomically high for the rest of the week. He came crashing back to Earth the next day when, in a horrible coastal storm, he stumbled in with 80. McIlroy fought and clawed back, but the damage had been done. He finishing T-3 — a whopping eight strokes behind Louis Oosthuizen.

Adam Scott: 2nd – 2012, T-3, 2013
Before he broke through at the 2013 Masters, Adam Scott was the best player in the game without a major. He almost ditched that tag two majors earlier at the 2012 Open Championship, but bogeyed his final four holes to throw it away. Ernie Els was the beneficiary, claiming his fourth major title. Scott followed his runner-up finish in 2012 with a T-3 showing at Muirfield last year, proving that he’s got links golf figured out. It doesn’t feel like it’ll be too long before Scott will win an Open Championship, but until he does, he makes this list.

Hale Irwin: T-2 – 1983
From 1974 to 1980, Hale Irwin played in 26 major championships and finished inside the top 10 some 50 percent of the time. Included in that stretch was two U.S. Open wins, five consecutive finishes of T-8 or better in the Masters, and two top 10s in the Open Championship. He would add a third U.S. Open title in 1990. In 1983, Irwin had his closest brush with the claret jug when he shot a 4-under 67 on Sunday. It wasn’t enough to catch Tom Watson, however, who held on by one to win his fifth Open Championship.

Bernhard Langer: 2nd/T-2 – 1981, 1984
Bernhard Langer is the greatest golfer to hail from Germany, ranking second on the all-time European Tour wins list with 42. He also has two green jackets in his closet — but he never won The Open. Langer did come close,  finishing runner-up on two occasions. The first time came in 1981, finishing four shots behind eventual winner Bill Rogers. In 1984, he almost caught Seve Ballesteros on Sunday, this time falling by two strokes to the swashbuckling Spaniard.

Byron Nelson: T-5 – 1937
It may not be fair to include Byron Nelson on this list since he only appeared in two Open Championships. Finishing T-5 in 1937 and T-32 in 1955, Nelson makes this list simply because he’s one of the greatest players in the game’s history. His streak of 113 consecutive cuts made is second only to Tiger Woods’ record of 142, but far more impressive because all 113 of Nelson’s “cuts made” were also top-20 finishes. He won every other major title at least once, and it’s hard to imagine that if he had played in more Open Championships, he still wouldn’t have completed the career grand slam.

Colin Montgomerie: 2nd – 2005
Unfortunately, most “best to never” lists have to include Colin Montgomerie. Monty, as he was affectionately known by the masses, is one of the greatest golfers in European history. He won 31 times on the European Tour and was the tour’s Order of Merit winner for seven consecutive years from 1993-1999. Along with those achievements, Monty also finished second in major championships five times. His closest call in the Open Championship came in 2005, when he finished five shots behind Tiger Woods.

Vijay Singh: T-2 – 2003
There wasn’t much Vijay Singh failed to accomplish in golf during the late 90s and early part of the new millennium. Winning the Open Championship, however, was one of those things. Singh won a Masters and two PGA Championships, he dethroned Tiger Woods as the No. 1 player in the world and collected 34 wins on the PGA Tour, but never triumphed in the Open Championship despite a number of strong showings. His closest call came in 2003, when he finished T-2, one stroke behind Ben Curtis.