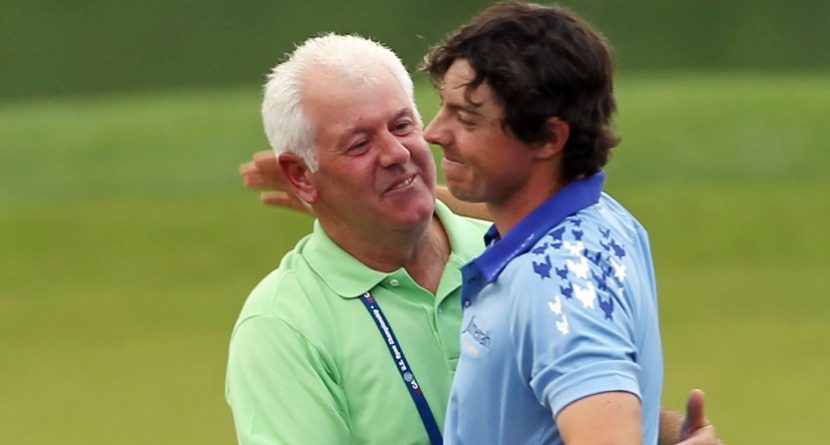 Sunday at the U.S. Open doubles as Father’s Day every year. For that reason, it’s produced some pretty special moments. This Sunday, it’s bound to produce at least one more, as Fran Quinn, a surprise to make the cut (he’s ranked 1,557th in the world), will compete with his 15-year-old son, Owen, on the bag.

Looking back, here are nine of our favorite Father’s Day moments at the U.S. Open:

1982 – Tom Watson sat atop the leaderboard tied with Jack Nicklaus when he teed off on the par-3 No. 17 at Pebble Beach, and sent his drive into the rough. But a chip-in for birdie gave him back the lead, and another birdie on 18 secured his first and only U.S. Open title. After receiving the trophy, he immediately called his dad.

1998 – Matt Kuchar was just an amateur at Olympic Club, but finished tied for 14th overall on his 20th birthday. That meant he made it to Championship Sunday, Father’s Day, with his dad, Peter, as his caddie. The Kuchars were greeted with “Happy Birthday” and “Happy Father’s Day” at every tee box.

2003 – Jim Furyk finally captured his first (and, so far, only) major title by collecting the U.S. Open trophy at Olympia. He won by three strokes, and embraced his soon-to-be-1-year-old daughter, Caleigh, on the 18th green. 2006 – Australian Geoff Ogilvy made par on his final four holes, including a chip-in at 17. He then watched from the Winged Foot clubhouse as Jim Furyk bogeyed the final hole, and Colin Montgomerie and Phil Mickelson recorded double-bogeys at 18, giving the Aussie a one-shot victory. His expecting wife, Juli, greeted him after the award ceremony.

2008 – Despite playing on a bum leg, Tiger Woods sank a birdie putt on 18 at Torrey Pines to force a playoff with Rocco Mediate. That put an emphatic end to his first Father’s Day as a dad. Upon winning the playoff the next day, Woods embraced his 1-year-old daughter, Sam Alexis. 2008 – After shooting a 6-over-par 78 on Saturday, Kevin Streelman wasn’t in contention on Sunday. But he made his dad’s day by asking him to be his caddie for the final hole. Dennis switched places with Mike Christensen, Streelman’s regular caddie, and helped his son record a birdie on 18.

2010 – Appearing in his final U.S. Open, Tom Watson asked his son, Michael, to caddie for him. The 60-year-old father made it into the weekend, meaning he walked the course with his son on Father’s Day, and at the same Pebble Beach course on which Dad won his U.S. Open trophy 28 years earlier, when Michael was in the womb of Watson’s then-wife, Linda. 2011 – Rory McIlroy crushed the course at Congressional, picking up his first career major title by turning in the lowest score in U.S. Open history (268). On hand to witness was McIlroy’s dad, Gerry, who more than a decade earlier built his young son a putting green in the family’s backyard in Northern Ireland.

2013 – Justin Rose didn’t have his father with him in person as he captured his first career major, but he was with him in spirit. Rose looked up toward the sky upon holding the trophy. Ken Rose died of cancer in 2002. “Me winning the U.S. Open was amazing because I felt really connected to my father in that moment,” Rose said this week. “That’s what I’m most grateful about for winning the U.S. Open, that connection, the ability it gave me to feel the presence of my dad once more.”