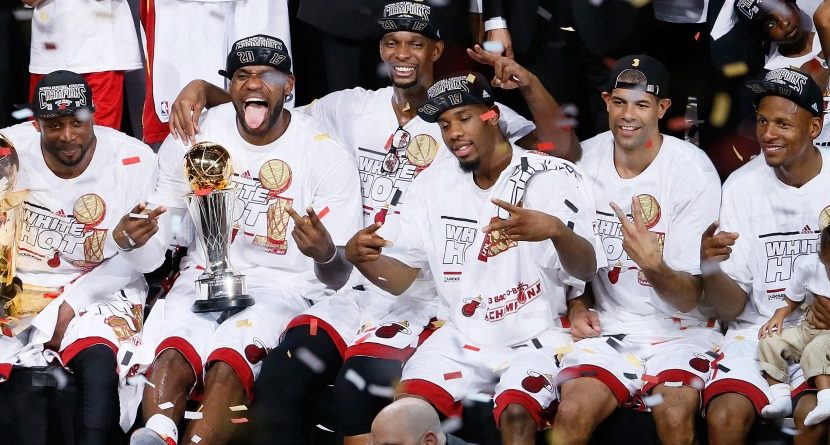 Related Link: Much Has Changed Since Tiger Woods Last Won A Major

Back9Network board member Ray Allen saved the Miami Heat’s season with a clutch 3-pointer in Game 6, and the defending NBA champs grabbed a second straight title Thursday by winning the 18th Game 7 in NBA Finals history.

Not surprisingly, it was a good one, as many Game 7s are. One of the best of all time, though? We’re not so sure. These are our nine favorite Game 7/winner-take-all/sudden-death moments in professional sports. Enjoy.

2008 Wimbledon Championships
World No. 1 Roger Federer faced off against world No. 2 Rafael Nadal in a match that lasted four hours and 48 minutes. Nadal took the first two sets, but Federer responded by winning each of the next two sets 7-6. After a few rain delays, Nadal claimed his first Wimbledon title by knocking off the five-time defending champion 9-7 in the deciding set.

2008 U.S. Open
Tiger Woods limped – literally – into an 18-hole playoff with Rocco Mediate after sinking a birdie putt on the final hole of his fourth round. The players returned the next day and continued going stroke for stroke, pulling even once again after 18 playoff holes. But Mediate bogeyed the 19th while Woods managed par, giving him his 14th career major title. Soon thereafter, two stress fractures in his leg and a damaged ACL forced Woods out for the rest of the season.

2008 Super Bowl
The New England Patriots rolled into Super Bowl XLII a perfect 18-0, and looked poised to complete the NFL’s first perfect season since 1972 as they held a 14-10 lead late in the fourth quarter. But behind quarterback Eli Manning, the New York Giants executed a 12-play, 83-yard drive, capped by a Plaxico Burress touchdown with 35 seconds left. The play of the game: David Tyree’s improbable 32-yard catch in which he trapped the ball between his hand and his helmet.

2004 American League Championship Series
We wanted to include only Game 7s that won championships, but the greatest comeback in baseball history had to be included. The Boston Red Sox fell behind the New York Yankees 3-0 after an embarrassing 19-8 defeat in Game 3. But all the momentum shifted when Boston took Game 4 in 12 innings. The Sox also won Game 5 in 14 innings, and crushed their rivals 10-3 in Game 7. Boston became the first Major League Baseball team to win a seven-game series after losing the first three games. That sent the Red Sox to the World Series, where they swept St. Louis for their first league championship since 1918.

2002 Super Bowl
The St. Louis Rams were heavy favorites over New England and its young quarterback, Tom Brady, but needed a rally to tie the game at 17 with 1:30 to go. However, that was enough time for Brady to march the Patriots down to St. Louis’ 30-yard-line, where Adam Vinatieri kicked a 48-yard field goal with seven seconds left. That marked the first Super Bowl to be won on the last play – yet Vinatieri and the Patriots would do it again two years later, when he kicked a field goal with four seconds left to defeat the Carolina Panthers.

2001 Stanley Cup Finals
Legendary defenseman Ray Bourque was traded from the Boston Bruins – for whom he played 21 seasons – to the Colorado Avalanche in 2000, a move made to help Bourque get closer to the elusive Stanley Cup. He wasn’t just a show piece, as Bourque scored the game-winner in Game 3 of the finals against New Jersey, and he was his usual solid self in Game 7, which the Avs won 3-1. After hoisting the Stanley Cup for the first time, Bourque retired later that summer. 1988 NBA Finals
L.A. Lakers coach Pat Riley made headlines when he promised fans a repeat after his team won the 1987 title, but sure enough, the Lakers made it back to the finals. They trailed the Detroit Pistons 3-2, but forced a Game 7. The season’s final game belonged to James Worthy, who put up his first and only triple-double of his Hall of Fame career – 36 points, 16 rebounds, 10 assists – as the Lakers won, 108-105.

1969 NBA Finals
This came right in the thick of the storied Celtics-Lakers rivalry, although Boston was 6-0 against the Lakers when they met in the NBA Finals. But L.A. was a heavy favorite this year due to all their stars and Boston’s aging veterans. Those vets managed to force a Game 7 in L.A., and spoiled the Lakers party when Don Nelson hit a jumper from the free-throw line to give Boston a 105-102 lead with a minute to play. The Celtics held on, giving player-coach Bill Russell his 11th and final NBA title.

1960 World Series
Despite taking a 3-2 series lead, the Pittsburgh Pirates were outscored 34-17 by the Yankees in those five games. And when New York won big again in Game 6, 12-0, it seemed certain to claim its 19th World Series – especially with a 7-4 lead going into the bottom of the eighth inning of Game 7. Not so much. Pittsburgh rallied for five runs in the eighth, and after New York tied it in the top of the ninth, Bill Mazeroski hit the first and only (so far) walk-off home run to win Game 7 of the World Series.

Related Link: 5 Things You Need To Know About Justin Rose