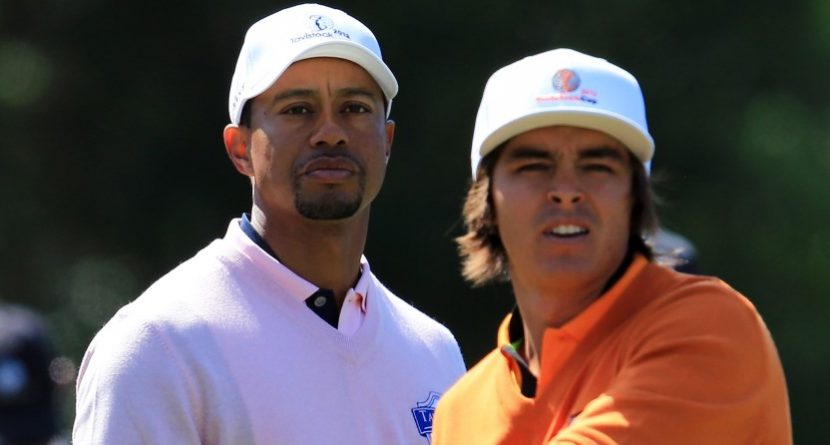 Professional golf is a wonderful game with countless magnificent people. So we thought Thanksgiving was the perfect time to express our thanks. Problem is, there are too many to list. But we narrowed it down to nine:

Tiger Woods: Simply put, the sport would not boast the popularity it does without him. He’s remained in our conscience even though he hasn’t played since August and we’re excited for his return in December. And the fact that he’s dating one of the world’s most popular female athletes makes covering him all that more enjoyable.

Rickie Fowler: Fowler lives one of the most interesting lives off the course with Dick Fowler, Golf Boys and racing being just a few examples. The terrific 2014 he’s had only makes us more thankful for him.

Bubba Watson: This man is living the dream we all wish we could. He’s never taken a golf lesson, yet he owns two Masters green jackets and nearly $27 million in career winnings. He loves to have fun, honor his fans, have fun, and play some great golf.

Stacy Lewis: Last year, she captured the British Open title and she isn’t afraid to speak her mind. This year, Lewis finished this LPGA season with the lowest scoring average for the second straight year and earned her second career Rolex Player of the Year award.

Keegan Bradley: Most golfers are not like most of us. It seems as if Bradley is, though. He’s a diehard sports fan, has a possibly unhealthy obsession with a superstar, and he likes the simple things in life.

Jason Dufner: There’s also Dufner in the category of “Everyday Joe” golfers. He looks the part, but has certainly ascended in status since his PGA Championship win. Now he has his own street and is pals with Howard Stern. But some of that fame came from Dufner just being Dufner, with his poor posture and public displays of affection to his wife.

Miguel Angel Jimenez: We appreciate that many golfers place an emphasis on fitness and health. But sometimes it’s just nice to watch a man approaching his 50s hang with the young bucks after having just polished off a bottle of wine and a cigar. Then again, we’re watching our fitness too, thanks to Jimenez’s stretching routine.

John Daly: This one should be pretty obvious; just about anything Daly does is interesting. Hit a golf ball out of a stranger’s mouth? Check. Play golf in a tutu? Check. Face your fear of snakes? Check.

Lydia Ko: We’re always trying to predict who will be the next star. And it seems the golf world was right with Ko. She earned the distinction of being the youngest winner in LPGA Tour history and recently took home the LPGA’s inaugural Race to the CME Globe title. It’s likely we’ll be thankful for her for quite some time.