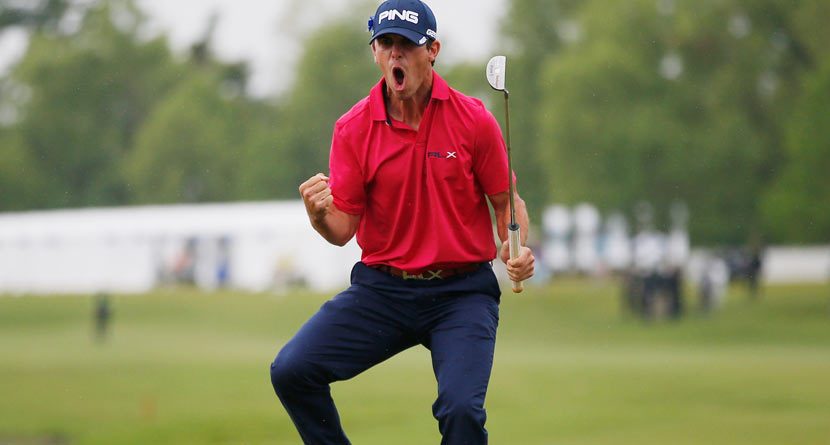 Golfers have often been criticized for being awful at celebrating. Capable of making a powerful, rhythmic swing that could be described as poetry in motion one moment, then celebrating their feat in a manner as awkward as a newborn giraffe taking its first steps.

That’s not to say there aren’t a few guys who have mastered the fist pump, the victory leap or even the very easy high-five. One of the guys who knows how celebrate is Billy Horschel and now, for people like Bernhard Langer and Tom Lehman, he’s put out a video on how to properly celebrate:

Payne Stewart – 1999 U.S. Open: Obviously, there’s been a ton of talk this week surrounding Payne Stewart and his epic win in the 1999 U.S. Open at Pinehurst. Rightfully so, as the win came in dramatic fashion in what will go down as (one of) the greatest U.S. Open(s) ever. His celebration after holing the tournament-clinching putt on 18 was so good that it’s now immortalized in statue form behind the 18th green at Pinehurst No. 2.

Phil Mickelson – 2004 Masters: Phil Mickelson exorcized all of his major championship demons in April 2004 by claiming his first green jacket. All of that pent-up energy came out in a victory leap that is now the stuff of legend. OK, it was more of a victory hop than a leap, but you have to give props to Phil, who is normally pretty stoic on the course whether he’s pouring in birdies or beating his driver out of bounds.

Tiger Woods – 2008 U.S. Open: Poor Rocco Mediate, he didn’t stand a chance. Well, that’s actually not true since Tiger’s putt at 18 on Sunday didn’t win the tournament; it just forced an 18-hole playoff on Monday. Mediate played great, and even the playoff went into a playoff that Tiger eventually won. But none of that would’ve happened had Woods not buried a tricky putt on 18 the day before. As the putt dropped, Tiger unleashed a double fist pump of epic proportions and Rocco Mediate said what we were all thinking: “I knew he’d make it” (start at 14:20).

Billy Horschel – 2013 Zurich Classic of New Orleans: Billy Horshel hasn’t won much on tour — only once, in fact. But his reaction to his first win is one of the finest examples of raw emotion bubbling to the surface. It’s pure gold. When you watch it, part of you is horrified that he might eat your child, and the other is jealous that you may never know the joy that elicits a reaction like that.

Tom Watson – 1982 U.S. Open: Moments after telling his caddie, “I’m gonna hole it,” in reference to his upcoming chip shot, Tom Watson had one of the most memorable celebrations in golf history. Out of a snarled lie and needing to make birdie to put the pressure on Jack Nicklaus, Watson made good on his claim and buried the shot. After running around the green, Watson turned and pointed to his caddie as if to say, “I told you so.” Watson went on to claim his only U.S. Open title.

Tiger Woods – 2000 PGA Championship: Really, you could make an entire list of great Tiger Woods celebrations. I mean, there’s a name for the color of shirt he wears on Sunday: Victory Red. If he weren’t good at celebrating, the world wouldn’t make sense anymore. One of his first and greatest celebrations came in the 2000 PGA Championship when he famously pointed at and stalked his putt on the first playoff hole against Bob May (start at 5:58).

Keegan Bradley’s Caddie/Flag Stick – 2012 Ryder Cup: In 2012, the Americans were on the wrong side of a record-tying Ryder Cup Sunday comeback, but before that, there was the super-excited caddie who decided a fist pump, high-five or scream wasn’t enough … he needed a prop. Holding the flag, he decided that whipping it around above his head, “Braveheart” style, would be his best option. He was absolutely right and while the Americans lost the Ryder Cup, this guy won the celebration category for the red, white and blue.

Larry Mize – 1987 Masters: One of the most unexpected major champions in history is Larry Mize. In 1987, fresh off the “Norman Slam,” Greg Norman had yet another chance to claim a green jacket. He didn’t, of course, because Larry Mize holed an improbable chip shot on the second playoff hole. The Augusta native jumped for joy and went for a jog, clenching his fists in a cross between disbelief and sheer joy.