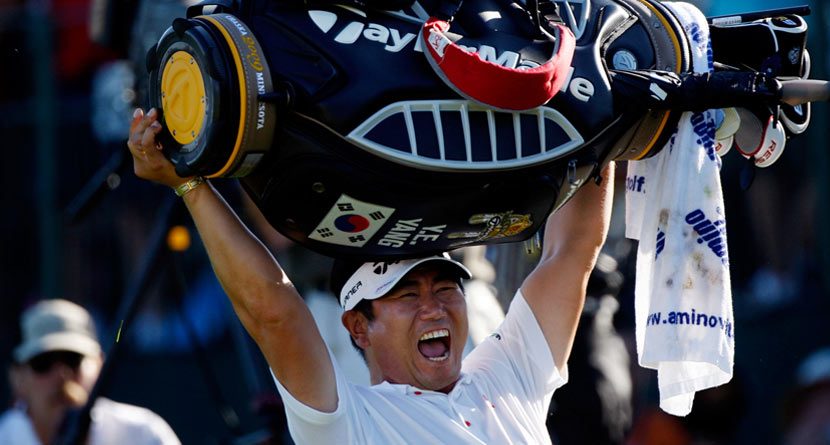 Sadly, the PGA Championship is often golf’s forgotten major. It’s the fourth one of the season, following much more prominent events like the Masters, U.S. Open and Open Championship. It takes place in August, when much of the U.S. has already turned its focus to football — yes, training camp football.

But the PGA Championship is a major just like the rest of them. That means the best players in the world always show up, and stars can be born as a result of stellar play. And they can get rich. The PGA has often paid out a little more than the other majors, but this year it offers a $10 million purse (only the Players Championship offers as much). The 2014 winner, who will be crowned next week at Valhalla, will walk with $1.8 million all to himself.

Maybe this year’s champ will also crack our list of the best moments in PGA Championship history:

1) Tiger Woods points putt into cup
The 24-year-old entered the 2000 PGA Championship at Valhalla having already won that year’s U.S. Open and Open Championship, and he needed a clutch birdie putt at 18 to force a playoff with Bob May. Woods sank the six-footer, walking briskly and pointing at the ball as it traveled the last few inches. He’d go on to win the playoff, and win the Masters the next year to claim the “Tiger Slam,” holding all four major championships at one time.

2) John Daly (who?) takes 1991 title
A 25-year-old by the name of John Daly began the 1991 PGA week as the ninth alternate, but after a crazy series of withdrawals, he made the drive from Memphis to Crooked Stick in Carmel, Ind., and took the course with the caddie of Nick Price, whose withdrawal made it possible for Daly to play. The big guy then stayed in the 60s for the first three rounds, and a 71 on Sunday was still good enough to give him a three-shot victory, quite possibly the most unlikely in PGA Championship history.

3) Shaun Micheel sticks it on 18
A plaque now sits in the 18th fairway on Oak Hill’s East Course, where the PGA Championship took place in 2003. The commemoration marks the spot from which Shaun Micheel stuck his 7-iron and landed his ball two inches from the cup that Sunday. A tap-in birdie gave the 169th-ranked golfer in the world his first and, to this day, only major and only PGA Tour victory.

4) Y.E. Yang yanks victory from Tiger
A perfect 14 for 14 at majors in which he led after 54 holes, Tiger Woods was essentially assured of his 15th career major in 2009 at Hazeltine. But when Woods gave up his two-shot lead after eight holes, his playing partner, Y.E. Yang, saw hope. And he seized the lead with an eagle on 14, then watched Woods bogey the final two holes, giving Yang a three-shot win and his first major. The triumph also marked the first major ever for an Asian man.

5) Bob Tway chips in to win
Greg Norman led each of the 1986 majors after three rounds, but had only one trophy to show for it (the Open Championship) as he took a four-shot advantage into the final round of the PGA Championship at Inverness. He still held that lead after nine holes, but Bob Tway pulled even at 14. They remained tied on the 18th, when Tway sent his approach shot into a bunker. Improbably, however, he holed out from there for birdie. Norman’s fringe shot missed, giving Tway his first and only major.

6) Rory McIlroy’s 66 sets PGA record
The Irishman crushed the field en route to winning his first major, the 2011 U.S. Open, and he did the same in collecting his second at the 2012 PGA Championship at Kiawah Island. A 67 on Saturday was followed by a bogey-free 66 on Sunday, leading to an eight-stroke triumph over David Lynn. That marked a record margin of victory, surpassing the seven-shot win Jack Nicklaus earned in 1980…

7) Jack Nicklaus secures No. 17
At 40 years old, Jack Nicklaus wasn’t exactly overwhelming his peers like he did in his prime. But after taking the 1980 U.S. Open, he dominated the field at the PGA Championship at Oak Hill. Nicklaus was the only man to shoot under par for the tournament, and at 6-under, his seven-stroke win set a tournament record at the time. His 274 remains the lowest four-round score at Oak Hill. The win went down as Nicklaus’ 17th major, the penultimate one of his career.

8) Byron Nelson’s unmatchable 1945
Byron Nelson won every major in 1945 – but don’t let the fact that the PGA Championship at Moraine was the only one held that year diminish was Nelson did. The others were canceled due to World War II, and the PGA Championship wasn’t even widely considered a major at the time, but it went down as the ninth of Nelson’s 11 consecutive victories that season. The win counts among his five career majors, and the 11-tournament win streak still stands.

9) Sergio Garcia’s scissor kick
While a 23-year-old Tiger Woods was trying to prove his dominant 1997 Masters victory wasn’t a fluke, a 19-year-old Sergio Garcia was attempting to show he was every bit as much of a prodigy as Woods. On the 16th hole of the 1999 PGA Championship at Medinah, trailing Woods by one, Garcia faced a tough shot with the ball up against a tree. Garcia swatted it out, then frantically chased after it to see it land, memorably performing a scissor-kick jump to get a better view of the green. Garcia would come up short by one stroke, but many predicted a long rivalry with Woods. That hasn’t been the case, as Garcia is still searching for his first major victory.