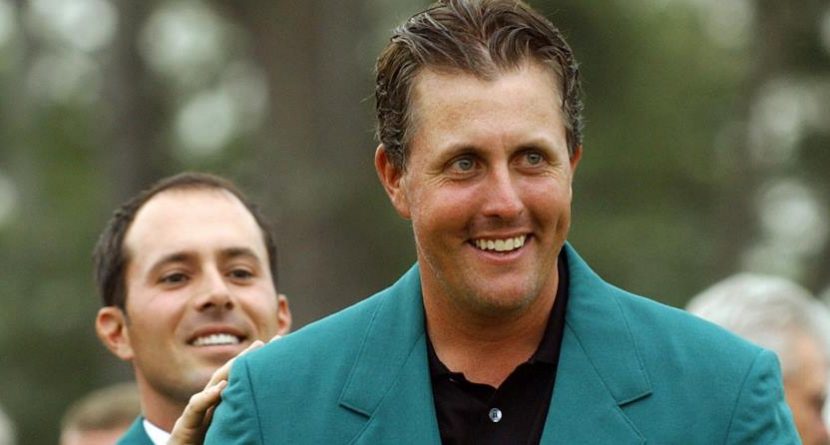 Phil Mickelson hoped to celebrate his 44th birthday on Monday by carrying around his first U.S. Open trophy. It would have made up for his 43rd birthday, which was also Father’s Day, when he relinquished the 2013 U.S. Open lead and took a record sixth runner-up finish.

But Lefty is not defined by his U.S. Open shortcomings. He has enjoyed a remarkable career, and one that he and we hope is far from finished. As we honor Mickelson’s 44 years of life, here’s a look back at his most memorable moments:

2004 Masters – Well known as the “Best Player Yet To Win A Major,” Mickelson emphatically shed that label with birdies on five of his final seven holes. The topper was on 18, where he dropped an 18-foot putt for a one-shot victory over Ernie Els. Mickelson’s 31 was the lowest back nine final-round score to win the Masters since 1986. “It’s hard for me to explain how it feels. It’s almost make-believe,” he said afterward.

Furthermore, that win got him into the PGA Grand Slam of Golf, a 36-hole exhibition featuring only that year’s four major winners. He shot an incredible 59 in the second round.

2013 Open Championship – It was the major many – Mickelson included – never thought he’d get. But after starting the final round of the last year’s Open Championship five shots behind leader Lee Westwood, Mickelson closed with four birdies over the last six holes. His 5-under 66 marked the lowest score of the day, the best final round at a major in Mickelson’s career, and the largest comeback he ever executed to capture a major.

2012 Hall of Fame induction – With 42 wins worldwide at the time, Mickelson was inducted in the World Golf Hall of Fame in May 2012. He thanked his wife, Amy, the legendary Arnold Palmer, his college coach, and of course, the only caddie he’s ever had while a pro, Jim “Bones” Mackay, whom Mickelson hired in 1993.

1999 U.S. Open – With his wife due to give birth to their first child any day, Mickelson went out and grabbed a share of the lead in the first round, and stayed tied atop the board after 36 holes. Despite being in real contention for the first major of his career, Mickelson and his caddie had a pager that would alert them if Amy were to go into labor. Mickelson maintained that he would leave the course at any moment, and he said his stance never wavered, even during the Sunday showdown with Payne Stewart. If it weren’t for Stewart’s iconic clinching putt on 18 to win, giving Mickelson his first U.S. Open runner-up, they would have played the playoff the following day, which is when Amy ultimately gave birth.

2010 Masters – Wearing a pink ribbon on his cap to raise awareness for breast cancer, Mickelson captured his third Masters title while his wife, Amy, and mother, Mary, were in the midst of battling the disease. Mickelson hadn’t played very well or practiced much leading up to the tournament, but he found his magic at Augusta, and Amy and Mary were there to greet him as he came off the final hole.

2005 PGA Championship – Mickelson’s chip from thick rough on No. 18 stopped two feet from the hole, giving him a tap-in birdie for a single-stroke victory over Steve Elkington and Thomas Bjorn. Mickelson held or shared the lead each day of the tournament, which carried into Monday due to weather delays. He collected his second career major while also fending off Tiger Woods, who was vying to win his third major of the year but finished T-4, two strokes behind Mickelson.

2006 Masters – After winning the final major of 2005, Mickelson also collected the first one of 2006. And his finish at Augusta actually lacked suspense. He walked onto the 18th tee box with a three-shot lead, and his bogey safely handed him his second green jacket. That was his only bogey of the day, but he topped Tim Clark by two strokes.

2007 Players Championship – For all the big tournaments Mickelson had won by May 2007, the “fifth major” wasn’t one of them. But he finally triumphed at the Players Championship in 2007 by beating Sergio Garcia by two strokes, thus collecting the largest check of his career to this day: $1,620,000. That is the same amount paid out to the two major winners so far in 2014, while the Players dished out a record $1.8 million to its victor last month.

2013 U.S. Open – Mickelson recorded his record sixth runner-up at the U.S. Open last year, when he slept on the 54-hole lead, briefly held it on Sunday, and ultimately described his defeat by saying, “This was my best chance of all them.” But it was quite remarkable that Mickelson found himself with the lead to begin with, because he arrived in the Philadelphia area a mere four hours before his 7:11 a.m. tee time Thursday morning at Merion. He attended his daughter’s eighth-grade graduation in San Diego that Wednesday night. Despite a lack of sleep and no practice on the tournament course in the two days leading up to the event, Mickelson carded an opening-round 67.