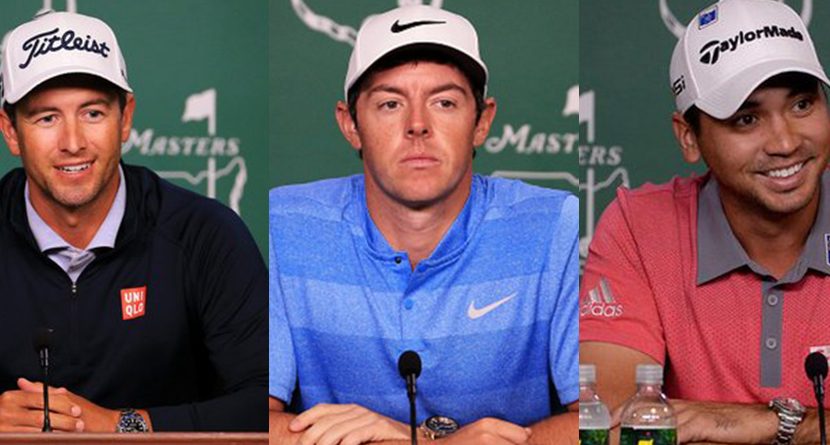 The first major of the year is upon us. The azaleas are in full bloom, the piped-in bird music is chirping and the soothing sounds of Dave Loggins’ “Augusta” can only mean one thing: the Masters is here.

More so than in year’s past, the 2016 Masters seems like a clear group of players has separated themselves in the build up to the first major championship. With pools and fantasy teams being tweaked and tweaked some more on the eve of the first round, here’s a definitive list of nine guys who maybe, probably, should be getting fitted for a green jacket come Sunday evening.

Dustin Johnson is a combined 36-under in 1st two rounds of his last seven majors, 10 shots better than anyone else pic.twitter.com/6DpiFOijjG

Completely under the radar prior to a solid finish last week at the Shell Houston Open, DJ is TaylorMade for Augusta National. His long, high ball flight sets up beautifully for the Masters. Coming off of a scar tissue-building 2015 major season, the expectation that he can’t close out the big one may be enough to keep many bettors off of him.

Since missing the cut in Dubai, @Louis57TM has five straight top 15 finishes including a win and runner-up finish. pic.twitter.com/D6qXW952VV

Another guy that’s flying under the radar. Louis very well could have won two majors last season had one guy been just a little off. Instead, the Kawhi Leonard of the PGA Tour is happy to ride his tractor around South Africa and swing his clubs as beautifully as anyone on the planet. When he gets on the grounds of Augusta, that sweet swing is always ready to take on the challenge.

Beware of the sick golfer. The two-time Masters champ was battling illness earlier this week that forced him to miss Monday’s practice round, but you’d be hard pressed to discount Watson on his favorite course in the world. An admitted neurotic, Augusta’s strict bylaws make for the perfect sanctuary for Watson as proven by his record here. Can he hold it together to win a third green jacket? Literally no one knows. Not even him.

There’s always more work to be done. This is my rule. How do you #RuleYourself? @UnderArmour pic.twitter.com/S5tWJb26dc

It’s hard to believe that the defending champion and No. 2 player in the world can be this high on a list, but it’s a testament to the level of form the other guys come into the week with. Despite winning the Hyundai Tournament of Champions to kick off 2016, Spieth has been hit or miss since. Can he recapture the magic that earned him his first green jacket. We don’t think so, but he’ll be in the conversation.

The most sprightly 45-year old on Tour, Phil Mickelson comes into the Masters with the lowest scoring average on the PGA Tour this season. Lefty hasn’t been able to pull off a win yet in 2016, but the typical Mickelsonian magic that he conjures around Augusta National will only be elevated considering the type of game he’s bringing down Magnolia Lane.

A late rise up the list due to the weather forecast, Fowler is a terrific wind player. Add that acumen to the ability he’s developed to play his best in big-time events and you have a recipe for a very dangerous player this weekend. Will he be able to nab his first major around the National come Sunday? His aggressive nature and solid wind play should have him in the hunt at the very least.

A past champion who’s won twice in the lead-up to the tournament, Adam Scott is looking to remove himself from the one hit (major) wonder category. His rejuvenated putting stroke has been enough to tame fields at PGA National and Doral, but will the new stroke translate to the undulating and lightning-fast greens of Augusta? That’s what we’re all waiting to see.

Jason Day is the World Number One as the Masters begins – here is his form on the PGA Tour #SSNHQ pic.twitter.com/ITrXErUHoH

The hottest golfer in the world over the past six months and a WGC winner this year… and he’s not at the top of the list? Not the very top. Day has definitely made leaps and bounds in his game since his first trip around the Georgia Jewel in 2011 when he finished T2, but it’s a matter of having everything clicking on all cylinders and hoping his best is enough. No one will be surprised if he grabs his second major in row.

Three days early…@McIlroyRory just made a hole in one on the 16th hole in today’s practice round. #TheMasters pic.twitter.com/K6WyRYZpuS

A gut pick. The prototypical Augusta National player, McIlroy is coming into the Masters looking to capture the final leg of the career grand slam, albeit the possibility is overshadowed by the plethora of story lines taking shape this year. His new putting grip will be a point of contention for doubters, but it’s been an improvement over what he had done this year to this point. Rory avoids the blow up nine and gets the job done this year.