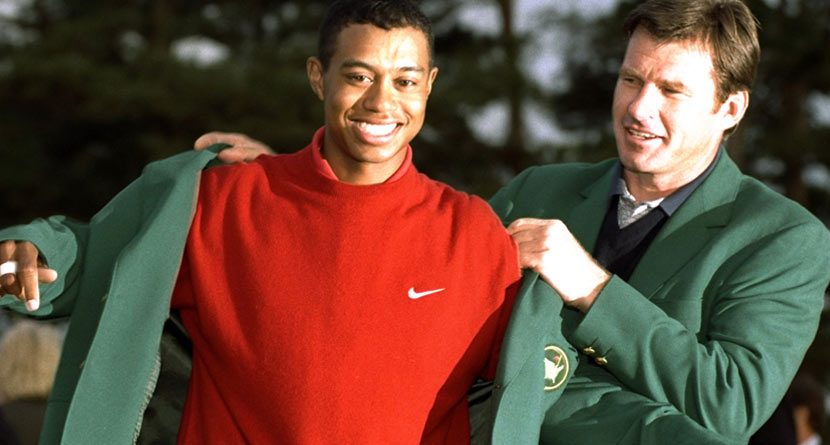 There’s no better illustration of Gene Sarazen’s competitive ingenuity than the club design he happened upon in the mid-1930s. The design characteristics were simple – add loft to a pitching wedge, apply a band of lead tape to the leading edge and, to complete the alchemy, reshape the sole a little – but their cumulative effect was extraordinary. Suddenly, bunkers and long grass were no longer quite as imposing.

Purists may lament the loss of the game’s early simplicity, but the modern, flat-faced sand wedge reshaped the way golfers both thought about and played the game. Yes, it made pitching and chipping “easier,” but architects responded in kind by making courses more demanding and green designs more elaborate. For better or worse, it created a science where once there had only been superstition.

He Was Tiger Woods

In April 1997, an African-American golfer of nearly boundless promise decamped to Augusta National and, in the space of four short days, dealt a death blow to the antebellum racial politics of the Southern country club. Not only that, but he did it while playing a game with which no one was remotely familiar. Golf’s origins are nearly impossible to trace. By the 15th century, the Flemish were playing a game called “kolf,” the Dutch had “spel metten colve” and James II of Scotland was blaming “fute-ball, golfe and uther sik unproffitable sportis” for his army’s frankly shocking archery skills.

What we do know, however, is that in 1744 a group of players – “gentlemen of honour,” no less – petitioned the city of Edinburgh to establish a competition, the sports’ first, to be held on Leith Links. A trophy was duly offered and a code of 13 rules ratified. The champion was a surgeon by the name of John Rattray, whose good fortune continued the following year when he narrowly escaped execution in the wake of the second Jacobite rebellion. The more you practice, the luckier you get, eh?

By 1930, 28-year-old Robert Tyre Jones, Jr. was already considered the greatest golfer of all-time. His greatest achievement, however, still lay ahead of him. That summer, in the space of four short months, “Bobby” contended with a challenging calendar and mounting public hysteria to capture the Open Championship, US Open, US Amateur and Amateur Championship, in the process become the first, and so far only, player to attain the fabled Grand Slam (or “Impregnable Quadrilateral,” as the soundbite of the day had it). Without Hogan’s single-minded, possibly pathological commitment to perfection, instruction as we know it today simply wouldn’t exist. Swing coaches and gurus might tweak the edges, elaborating here of simplifying there, but broadly speaking, the pedagogic template remains that the dream team of Hogan and Herbert Warren Wind laid down in 1957’s Five Lessons: The Modern Fundamentals of Golf.

Sh!t Gets Real at the Ryder Cup

Prior to 1979, the Ryder Cup was a pleasant, if altogether predictable, exhibition match between the United States and the British Isles. On one side routinely lay a dozen well-drilled tournament pros, the bulk of them major winners and headline-grabbing stars, on the other a motely crew of part-time club administrators and grifters. The rivalry between the two tended to be more imagined than real.

Then, at the behest of Jack Nicklaus (no doubt tired of thumping GB&I on a biannual basis), the weight of continental Europe joined the challengers’ cause. The change in format didn’t just reinvigorate the tournament, it helped prove to an entire generation of European talent that major success lay within reach.

When Two (Balls) Become One The last real step in the standardisation of the modern game was taken in 1990, when the governing bodies resolved their differences on the matter of the golf ball. For decades, the USGA had insisted on a standardised weight of 1.62 ounces and diameter of 1.68 inches. While the R&A agreed on the first count, it allowed a degree of wiggle-room on the second. This led to the game being split between a larger “American ball” and smaller, more penetrating “British ball”.

How boring. By way of apology, I offer this video of George Coetzee doing something amazing.

The PGA Championship Gets a Makeover For 40 years, the PGA Championship was the premier professional matchplay event in the world, but by the 1950s, its format had begun to feel loose and anachronistic. Television networks demanded something more energetic and predictable – broadcast friendly, in short – and the players themselves could sense its prestige ebbing away. The leap to 72-hole strokeplay was made in 1958, the year of Dow Finsterwald’s triumph at Llanerch Country Club.

The decision put the PGA Championship back on television schedules, but in so doing, subordinated it to the three majors. It also succeeded in pushing mathplay to the very periphery of tournament golf, a land of novelty from which it has never really returned. The PGA Championship’s slow decline was hastened somewhat in 1953 by the decision of Ben Hogan, then the preeminent American golfer, to skip the tournament in favour of competing in the Open Championship at Carnoustie. The move, though not without negative consequences (see above), resulted in a net gain for the sport: for serious golfers, participation in the Open Championship had once more become obligatory.