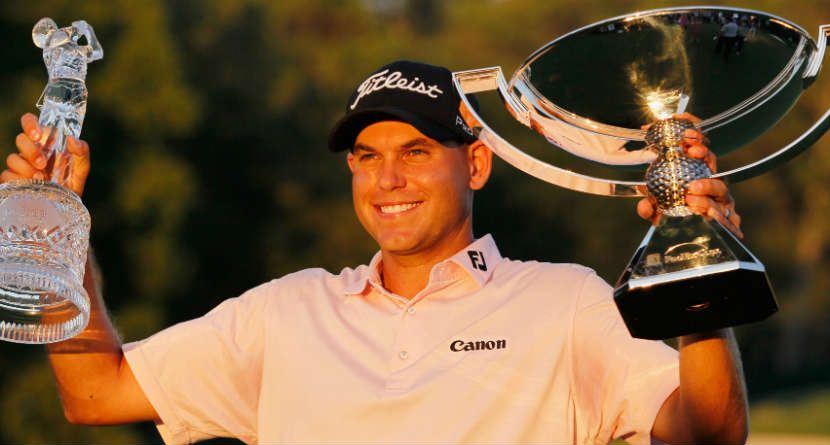 Throw away the razors. Let the playoff beard grow wild. For the FedExCup playoffs are about to begin.

While the PGA Tour’s postseason is run a bit differently than the four major sports, you can sure bet on plenty of excitement, drama and history to be made starting Thursday with Round 1 of The Barclays. It all comes to a head four weeks and $67 million from now at the Tour Championship at East Lake in Atlanta.

From now until then, though, four champions will be crowned and some of the most intense and risky golf of the season will be showcased as the top 125 golfers on tour hope to be among the final 30 competing at East Lake.

As the playoffs progress, the play tends to intensify. With each shot meaning even more than a place on the leaderboard and bigger (or smaller) check, the big moments are aplenty in the FedExCup playoffs.

Here’s a look at our 9 favorite moments in FedExCup history:

Stenson becomes first European to win FedExCup
Until last year, Henrik Stenson had endured a bit of a rollercoaster career when talking success. With his win last year, though, the talent Stenson had shown during his bright flashes was ultimately realized. In true Stenson fashion, of course, he won in rollercoaster fashion. He entered the playoffs after three straight top-three finishes (two of which were majors) and finished T-43 at The Barclays. He won at the Deutsche Bank before struggling again at the BMW Championship. In the end, though, he went wire-to-wire to win the Tour Championship and the FedExCup’s ultimate $10 million purse.

Simpson Wows In Deutsche Bank Win
Before his impressive U.S. Open victory, Simpson won his way into the hearts of golf fans with a remarkable victory at the 2011 Deutsche Bank. Simpson came from behind and birdied the second playoff hole — one of three clutch birdies down the stretch. The win, of course, came after Simpson’s first PGA Tour victory a few weeks earlier at the Wyndham Championship.

Tiger’s Run in Inaugural Playoffs
When the playoffs were first instituted in 2007, there were some skeptics — to say the least. They didn’t last long, though, as Tiger — in true fashion during that era — blew away the competition. He closed out a dominant eight-shot victory at the Tour Championship and hauled in the inaugural FedExCup title.

Vijay Catches Fire
In just the second year of the playoffs, Vijay Singh used a pair of victories to catapult himself to the FedExCup title. In the playoffs’ opening event, The Barclays, it seemed to be Sergio Garcia’s tournament to win. The Spaniard buried a 25-foot birdie putt on the first playoff hole but did so only before Singh sunk one from 20 feet to push the match. Singh went on to win on the next playoff hole. The very next week, Singh caught fire and shot a final-round 63 to win the Deutsche Bank Championship.

The Stars Align
Perhaps it’s because of its proximity to sports-crazed Boston, but the Deutsche Bank Championship, played at TPC Boston in Norton, Mass., is always played under a true playoff atmosphere. In that inaugural playoff race, Tiger and Phil dueled in the Monday (Labor Day) finale, shooting 67 and 66, respectively. That week, which also helped turn FedExCup skeptics into believers, Mickelson prevailed. A few weeks later, though, Tiger would claim the ultimate victory.

Snedeker Triumphs After 2009 Collapse
There were plenty of memories from Brandt Snedeker’s 2012 FedExCup triumph but the biggest one may date back to 2009. That year, he infamously four-putted away a chance to sneak inside the top 30 and move on at the BMW Championship. He erased those memories, though, in 2012 with a rousing victory at the Tour Championship after chipping in on the 71st hole.

Furyk shoots 59 at the 2013 BMW
Jim Furyk has been a constant contender in his time playing in the FedExCup playoffs but have you any idea just how good he’s been? His 82 rounds of par or better is the most in playoff history and you, of course, remember his 59 last year at the BMW Championship. It’s the only 59 in FedExCup history.

Play It Again, Jim
To reiterate, Furyk sure has a place in FedExCup lore. In 2010, Furyk switched from his belly-length putter after the third round and trekked to Joe & Leigh’s Discount Golf in Easton, Mass., just a short drive from TPC Boston, the site of the Deutsche Bank Championship. He went to the bargain bin and landed on a $39 used Yes! putter and went ahead and won the Tour Championship — and a massive purse — just a few weeks later using it. Word is, Furyk received the ‘Ryder Cup Player Discount’ on that purchase …

Bill Haas Goes Swimming
Who can forget this? In 2012, Bill Haas turned in one of the most memorable shots in the history of the game, let alone the FedExCup, when he flopped one out of the water greenside on the second playoff hole. With Hunter Mahan on the green in regulation at East Lake’s 17th, Haas had no choice but to go for gold and hope for the best. He splashed his half-submerged ball out of the water and it checked up nicely pin high. He went on to win with a par on the next hole, East Lake’s par-3 18th.

Other Hot Links:
– Crazy Money: How $11.4 Million Compares To Other Sports
– 5 Things To Know About Henrik Stenson
– Just Who Is Brandt Snedeker
– 2015 Major Championships: A Year in Preview
– By The Numbers: The 2014 PGA Championship
– Weekend Recap: Camilo Villegas Victorious Again, Inbee Park Too