9 Most Memorable Moments from the Players Championship 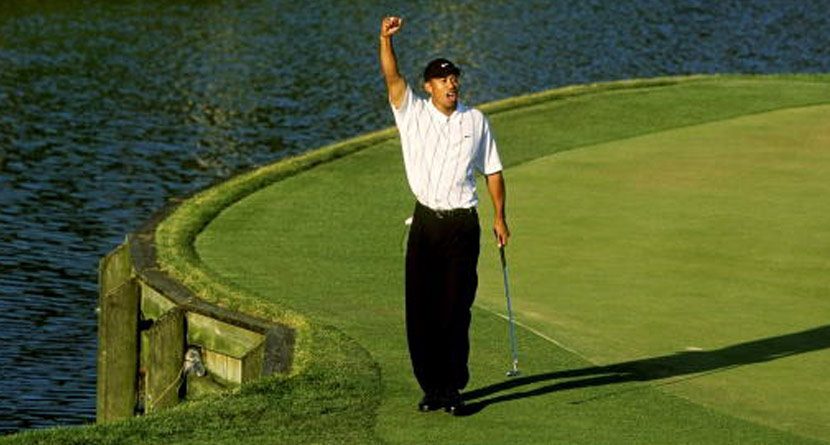 It’s Players Championship week, featuring the unofficial “fifth major,” a lot of money, and arguably the toughest field in golf. Winning this tournament is no small feat.

So it’s no surprise that many big names have triumphed at TPC Sawgrass. Tiger Woods, Phil Mickelson, Adam Scott, Henrik Stenson, Sergio Garcia and Matt Kuchar all have a Players title on the resume.

A couple of them even make the list for most memorable Players Championship moments ever:

Greg Norman shoots tournament record – in a straw hat
The Shark was among the most popular players in golf in the 1990s, especially after winning his second major at the 1993 Open Championship. He captured his first and only Players title in ’94 by putting on a clinic and finishing with a tournament-record 24-under 264. He followed his opening-round 63 by carding three straight rounds of 67, beating Fuzzy Zoeller by four strokes. And Norman did all this while wearing a funky shirt and straw hat – so you know, pretty much the Aussie’s typical look.

Hal Sutton tames Tiger
Tiger Woods entered the 2000 Players Championship having won 11 of his 15 preceding tournaments, so you might say he was a slight favorite. At 24, he already boasted two majors, and three more were on the way in 2000 alone. He didn’t get the Players title though, as a 41-year-old Hal Sutton grabbed the lead and held off every attack Tiger issued. On the 72nd hole, Sutton stuck his 6-iron shot from 179 yards eight feet from the pin, thus protecting his one-shot edge. That marked Sutton’s second Players title, but the $1,080,000 check he collected in 2000 (the event’s first seven-figure winner’s payout) was a bit more than the $126,000 he earned in 1983.

Tiger Woods is “better than most” in 2001
Maybe spurred on by his near-miss at the Players in 2000, Woods went on to win the U.S. Open, Open Championship and PGA Championship later that year, then take the 2001 Masters for the so-called “Tiger Slam” – holding all four major championships at once. And two weeks prior to that Masters title was his first Players Championship win, a one-stroke victory over Vijay Singh. Among the many Tiger highlights you’ve seen throughout the years is his “better than most” putt during the third round at the famed island green at 17.

Sergio Garcia sinks at 17
Quite the hubbub arose last year at the Players Championship when Sergio Garcia grew annoyed playing with Woods in the third round, and the two engaged in a little war of words through the media. Playing separately for the final round, both men were in contention until Garcia came to 17. He and Woods were tied at 13-under, but the Spaniard’s tee shot fell short of the famous island green. On his second shot (and now third overall), he sent another ball into the water. Garcia eventually took a seven (quadruple bogey), then proceeded to double bogey No. 18. Woods won it all at 13-under; Garcia tied for eighth at 7-under.

Craig Perks enjoys late-round perks
A hot putter is one way to win a tournament. Using your putter only once over the final three holes is a completely different way to win, but that’s how Craig Perks closed out his final round of the Players Championship in 2002. He chipped in for eagle at No. 16, sank a long putt on 17 for birdie, then chipped in from the rough again on 18, saving par and securing a two-shot win over Stephen Ames.

Jerry Pate throws commish into pond at TPC Sawgrass’ debut
Many folks were excited about the opening of the TPC Sawgrass Stadium Course, so you can imagine how fired up Jerry Pate was when he won the event – then called the Tournament Players Championship – in its debut at the shiny new venue in 1982. He stuck his 5-iron shot – with an orange ball – on the 72nd hole to two feet, and after tapping in for birdie and a two-shot victory, Pate tossed course architect Pete Dye and PGA Tour Commissioner Deane Beman into the green’s adjacent pond. He then dove in himself.

Fred Couples rides lucky bounce to second title
Only Jack Nicklaus has claimed this event three times, while five guys have two titles. Fred Couples would not be on that short list were it not for a fortuitous bounce on his second shot at the 16th hole during the final round in 1996. His approach shot looked as if it would be diving into the pond, but it bounced off the edge and settled just off the green; Couples then sank the putt for eagle. He followed that up with a birdie at 17, and all of a sudden had the lead for good.

Miguel Angel Jimenez’s aces island green – with short hair!
The lovable Spaniard has never won on the PGA Tour, but he’s one of just six men to sink a hole-in-one on what may be the tour’s most famous hole. In 2002, then just 38 and donning much shorter hair, Jimenez rolled in an ace on the island green at No. 17. No one has eagled the famous par 3 since.

Birdie steals Steve Lowery’s ball
Steve Lowery, as most players are, was pleased to have landed his tee shot onto the green at 17 in 1998. But as he and his group made their way from tee to green, a seagull landed near Lowery’s ball, tried to pick it up, rolled it around, finally succeeded in picking it up, then flew away. But it became too heavy, and the bird dropped it in the water. Though he obviously couldn’t play the same ball, Lowery was allowed to bring in a new one without penalty.