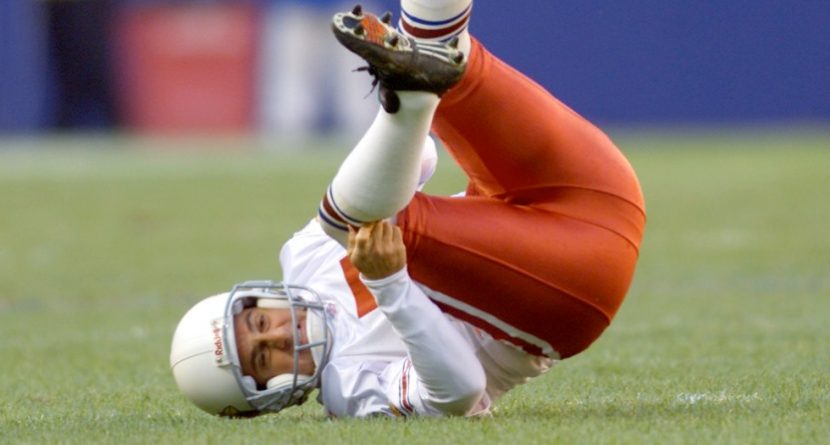 We all do stupid things to injure ourselves. Fortunately, most of us aren’t in the public spotlight, so few people ever hear about our dumb acts.

Athletes, however, aren’t as lucky. When they experience an embarrassing injury, the public hears about it, especially if they’re forced to miss time from their sport.

Such is the case this week for Brandt Snedeker. He was scheduled to play in the Australian PGA Championship, but after tying for 55th at the WGC-HSBC Champions in Shanghai, the world’s ninth-ranked golfer went on a Segway expedition in China. Those things are tricky to maneuver, and sure enough, Sneds lost his balance, landed wrong on his left knee, and bruised his left tibia and strained the anterior cruciate ligament in his left knee. He immediately withdrew from the Australian PGA and won’t be able to play golf for anywhere from two weeks to two months.

That mishap, though, doesn’t crack our list of favorite odd sports injuries:

Ryan Lochte: Also injured this week was the three-time Olympic swimmer, who tried to catch a teenage girl that became overly excited upon seeing him. They both fell over, and Lochte’s knee hit a curb, tearing the MCL and spraining the ACL in his left knee.

Bill Gramatica: In 2001, the Arizona Cardinals rookie kicker made a 43-yard field goal and proceeded to celebrate by leaping into the air. Upon landing awkwardly, he tore his ACL. We could understand if it was a game-winning field goal in the fourth quarter, but it was in the FIRST quarter of a 0-0 game!

Sammy Sosa: While still trying to hold on to an aging career in 2004, the Cubs slugger sprained a ligament in his lower back after two hard sneezes caused back spasms. He went to the disabled list for a month.

Amare Stoudemire: Angered after a loss in the 2012 playoffs, the New York Knicks center punched the glass case surrounding a fire extinguisher in the locker room. Stoudemire cut his hand and missed Game 3 of the series against Miami, but returned for Games 4 and 5.

Gus Frerotte: The Redskins quarterback had already rushed for two touchdowns in his young career by the time he faced the Giants in 1997, but for some reason, upon trotting in for his third career rushing score, he head-butted a wall in celebration. That gave him a concussion and sent him out of the game.

Milton Bradley: The hothead who doubled as a Padres outfielder in 2007 was arguing with an umpire as his manager, Bud Black, attempted to hold him back. Black so forcefully spun Bradley to the ground that the player tore a ligament in his knee and missed the rest of the season.

Chris Hanson: Coaches of the Jacksonville Jaguars tried to inspire the 0-3 team in 2003 by bringing in an ax and a tree stump and telling the players to keep “chopping wood,” i.e. working hard. Hanson, surely one of the weakest members of the team, tried to swing that ax and connected with his leg. He was rushed to the hospital and missed the rest of the season.

Clint Barmes: During his rookie season in 2005, the Colorado Rockies infielder drove some ATVs one summer evening with teammates. When the team learned of his broken collarbone the next day, it was reported that that’s how the injury occurred. Actually, though, Barmes tripped up the stairs of his apartment later that night while carrying deer meat acquired earlier in the day.

Plaxico Burress: Late in the 2008 season, at the peak of his career, the Giants wide receiver accidentally shot himself in the leg as his gun slipped down his pants at a nightclub. He was later found to have been carrying the weapon illegally, and ended up spending nearly two years in prison because of it. Burress returned to the NFL in 2011, but was never the same caliber of player.