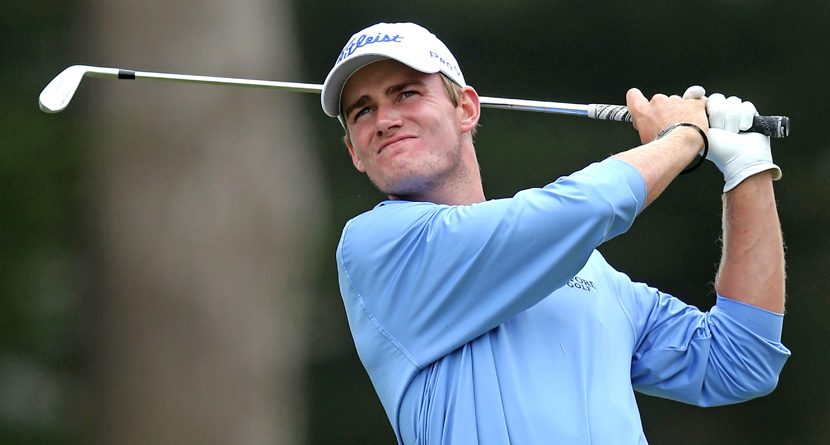 The 2013-14 PGA Tour season tees off this week at the Frys.com Open, which means a slew of PGA rookies will get their first crack at greatness. Here is a list of nine newbloods to keep an eye on this season.

John Peterson – The Louisiana-born Peterson won the 2013 Web.com Tour Finals in impressive fashion to earn his Tour card. He made 16 of 18 cuts on the Web.com Tour last season, including a runner-up and three third-place finishes. The former LSU standout received an invite to play in last year’s Crowne Plaza Invitational, where he finished just outside the Top 25.

Chesson Hadley – Finishing the Web.com Tour season ranked third overall, Hadley won the Rex Hospital Open and the Web.com Tour Championship to cap off his year. Hadley got his first taste of a PGA Tour event in August at the Wyndham Championship, but unfortunately missed the cut. He also fired a nine-hole score of 27 at the BMW Charity Pro-Am earlier in the year. Patrick Cantlay – We’ve all seen this kid in PGA Tour events in the past, but this will be his first year as a card-carrying member. The UCLA superstar won last year’s Colombia Championship in addition to playing seven PGA Tour events on special exemptions and invites. We all expect big things from Cantlay throughout his career, starting in 2014.

Hudson Swafford – The University of Georgia stand-out makes his Tour debut after finishing in the Top 25 on the Web.com Tour in 2013. Swafford shot a course-record 9-under 62 in the final round of the Stadion Classic to earn his first career win, joining former teammate Russell Henley (2011) as the only Bulldogs to win on their home course.

Andrew Loupe – Like his college teammate John Peterson, Loupe was a standout player at Louisiana State University before making a huge leap at the end of 2013 by finishing T6 at the Web.com Tour Championship.

Peter Malnati – The 2013 News Sentinel Champion on the Web.com Tour and University of Missouri star Malnati actually had no Web.com Tour status to start last season. His strong play throughout the year eventually stamped his ticket to the PGA Tour.

Wes Roach – A product out of Duke University, Roach recorded three Top-10 finishes in seven starts on the Web.com Tour. He would later earn a career-best T2 at the Mexico Championship to move from No. 32 to No. 15 on the money list. Wes Roach lines up a birdie putt attempt on the 8th hole during the second round of the Cox Classic on Aug. 23, 2013 in Omaha, Neb.

Kevin Tway – This kid had an impressive season in 2013 by way of four Top-10s and a win in 18 events despite having limited Web.com Tour status. The son of former PGA Tour player Bob Tway, Kevin looks to improve on a slow year toward the end of the season by making his debut on the PGA Tour in 2014.

Kevin Foley – The Penn State University star and Panama CLARO tournament champion rounds out our list of rookies to watch. While his 2013 left a lot to be desired (having missed 10 cuts at one point), Foley aims to make a bigger impression in the big leagues this year.

Related Links: 9 Reasons Why Jordan Spieth is Coolest 20-Year-Old Ever