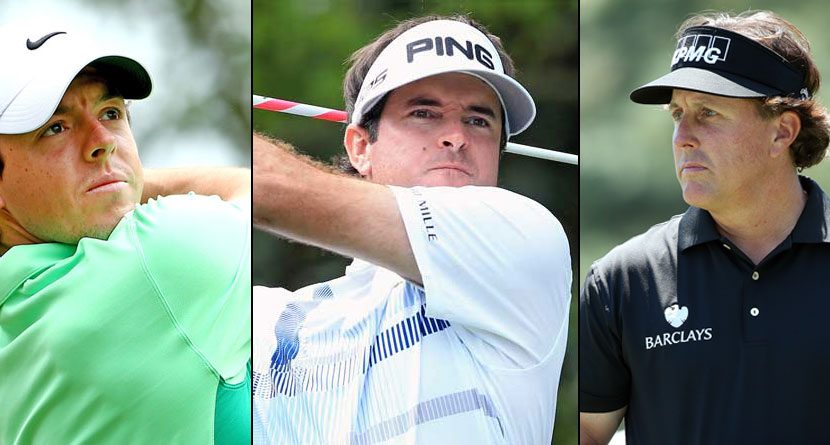 With news that Tiger Woods will not be competing at this year’s U.S. Open at Pinehurst, chances are many fans have already lost interest in one of golf’s greatest tournaments. Well, I like to call those people “dumb” and they would not be allowed in my home. No sir.

There are plenty of great golfers to root for at this year’s second major, least of which a certain left-handed stock market guru (heh) on the verge of history!

Here are 9 players you should keep an eye on next week:

Hands-down the biggest story of the week will be whatever Philly Mick does at the Open. Extracurricular accusations aside, Mickelson is one U.S. Open victory away from completing the career grand slam. In addition, Callaway Golf is running a contest to award some Average Joe the equivalent of Phil’s tournament earnings for the week. Oh, and by the way, Lefty is also one of the greatest golfers to ever play the game.

Speaking of grand slams, Bubba is the only player in the world – having won The Masters in April – who can win every major this year. He’s also a complete lunatic when it comes to hitting his driver, and there is no doubt he’ll bring Pinehurst to its knees all week.

Rory suddenly has his groove back despite breaking up with ex-fiancee Caroline Wozniacki, having won the Euro BMW PGA Championship a couple weeks ago. He also has a U.S. Open title under his belt, having demolished the field in the 2011 tournament.

There might not be an American golfer more buzzworthy than the young Spieth, who is looking to join the ranks as the next “great young superstar.” Hell, who am I kidding? The University of Texas alum is already a superstar and doesn’t appear to be slowing down.

Rose is the defending champion this year, and while he hasn’t had the greatest 2014 season, he’s still a fan-favorite in every tournament he plays. There hasn’t been a back-to-back winner at the Open in 25 years, so doing so would put Rose in the record books.

There’s a new king of the world golf ranking mountain these days, and he’s an Australian who carries a big stick – and he also uses a long putter! Scott is looking for his second career major, which would get him even closer to Hall of Fame status.

Speaking of long putters, Keegan has recently switched back to a traditional putter in preparation of the 2016 ban on the anchored putting stroke. If he wins this year’s Open, it will send the anti-anchoring pundits into a frenzy.

If you were to tell me that Jimmy Walker would have three PGA Tour wins this season, I’d probably say, “There’s no way that dude from Good Times can win a golf tournament.” Then you’d say, “No dummy; I’m talking about this season’s surprise player.” Then I’d say, “Don’t call me dummy.” You get the idea.

Any Amateur Player in the Field

What makes the U.S. Open so great? The fact that some amateur golfer no one has ever heard of can win the whole damn thing. The last amateur to win our national championship was Johnny Goodman way back in 1933, so why not root for the underdogs this year?