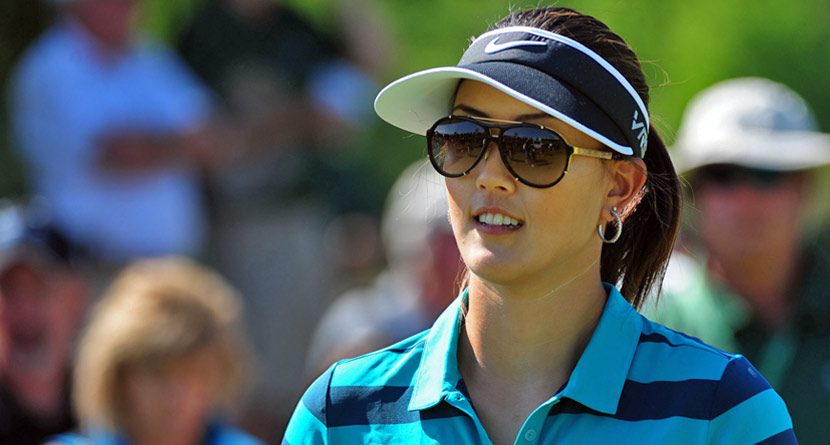 For the first time in history, the U.S. Women’s Open will be played on the same course as the men’s U.S. Open and take place the very next week. With nearly 40 hours of TV coverage for the guys’ event, the ladies were able to enjoy the benefit of scouting the Pinehurst No. 2 course before even arriving on the grounds. Yet, many women were already in Pinehurst while the men took their shots at the major, so they were able to check out the layout on their own and/or get tips from the fellas.

Of course, the LPGA stars won’t be playing from the same distances as the men, but the natural/sandy areas and the turtleback greens will be the same. Only three of the 156 players were able to stay under par for the tournament last week. How will the women compare?

Here are 9 ladies we’re keeping an eye on:

Stacy Lewis: The current world No. 1, Lewis already has two victories this year on the LPGA Tour and two majors in her career (last year’s Women’s British Open and the 2011 Kraft Nabisco Championship). The 29-year-old also leads the tour in money, scoring average, top-10 finishes and points for the CME Globe, making her the easy choice for Player of the Year as of now. A major title would only solidify that. Lydia Ko: Remember, she’s only 17. But is she already the best woman yet to win a major? If you go by world rankings she is. Only Lewis and Inbee Park sit in front of the third-ranked Ko, and they’re multiple major winners. Her closest call came last year at the Evian Championship (when she was still an amateur), where she was a runner-up to Suzann Pettersen. Ko has won as an amateur and pro on the LPGA Tour; next is a major. Lexi Thompson: The victor of the season’s first major, the Kraft Nabisco Championship, Thompson is looking to keep her grand slam hopes alive by taking the U.S. Women’s Open too. Park set the golf world abuzz last year when she won the first three majors; the 19-year-old would set it on fire if she replicates the feat. Michelle Wie: If it weren’t for Ko, Wie at No. 11 in the world would be the highest-ranked player without a major. It’s hard to believe that she’s been a pro for nearly a decade, and it’s harder to believe a major is still missing from her trophy case. Wie took a second and a third at majors in 2005, when she was still an amateur, and her best result at the U.S. Open is T-3 from 2006, a year in which she recorded two other top-five finishes at majors. Yet, 2014 may be her best yet. Wie already has an LPGA Tour win and runner-up from the Kraft Nabisco, and she trails only Lewis in money, scoring average, and points for the CME Globe. Cheyenne Woods: Tiger Woods’ 23-year-old niece is ranked 160th in the world and competes primarily on the Symetra Tour – the LPGA’s developmental circuit – but Cheyenne qualified for her second career U.S. Women’s Open via a qualifier in Arizona. She didn’t make the cut in 2012, but the Back9Network ambassador is much improved since, as she won her first major pro tour event in February. Woods will be in one of the more popular groups to follow Thursday and Friday, as she’ll be playing with the ultra-popular Natalie Gulbis and U.S. Solheim Cup captain Juli Inkster, a two-time Women’s Open champ. Inbee Park: The 25-year-old South Korean became just the second woman to collect three majors in one season, when she claimed 2013’s first three (including the U.S. Women’s Open). Her form dipped dramatically in the three majors that followed, but she’s once again enjoying a solid season despite losing her No. 1 ranking. Park is coming off a win at the LPGA Tour’s most recent event, the Manulife Financial LPGA Classic, and she’s second on tour in top-10 finishes, third in scoring average and fourth in money. Karrie Webb: She owns seven career majors, the most recent coming at the 2006 Kraft Nabisco, and her most recent U.S. Open win coming in 2001. So you might assume the Aussie’s better days are behind her, especially considering she’ll turn 40 later this year. But Webb isn’t going away any time soon. She’s one of four women who have won twice already this year on the LPGA Tour, and she’s still ranked fifth in the world. A title this week and Webb would move to sixth all time on the majors list with eight, tied with Betsy Rawls. Lucy Li: The 11-year-old sixth-grader from San Francisco is the youngest player to ever qualify for the U.S. Women’s Open. She’s already considered a success, but her feat would become even more remarkable should she make the cut. Thompson was the previous “youngest ever at the U.S. Women’s Open” title holder, and she didn’t make it to the weekend at this event until her third try. So that’s the bar, yet should Li’s career turn out anything like Thompson’s, that would definitely be a success. Paula Creamer: The “Pink Panther” vaulted to fame in 2010 when she won the U.S. Women’s Open at age 23. But the success that seemed imminent never really came, and Creamer didn’t win a single tournament until the HSBC Women’s Champions this year, when she drained a 75-foot eagle putt on the second playoff hole. She’s down to 13th in the world now, but another U.S. Open title would get her going back in the right direction.