9 Players to Watch at the Masters 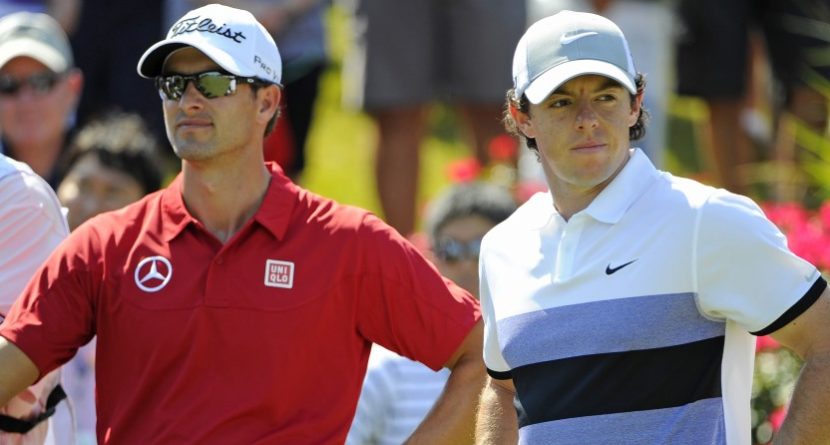 You may have heard: Tiger Woods is not playing the Masters this week. But there are plenty of stars who are, whether it be guys looking to tack onto their major total or guys looking to join elite company. Here are 9 players to watch during the 78th edition of the Masters Tournament:

Adam Scott
With Woods out, Scott is the highest ranked player in the field, and he’s also the defending champ. The odds are not with the Aussie in claiming a second straight green jacket, as only Woods (2001-02), Nick Faldo (1989-90) and Jack Nicklaus (1965-66) have done so. That’s a trio with 38 career majors. But Scott has finished in the top eight the past three years at Augusta, and in five events this year he’s placed in the top 10 three times.

Phil Mickelson
Of course you’re going to watch Mickelson at the Masters. He’s won the tournament on three occasions and trails only Nicklaus and Woods with the most career top-five finishes at Augusta (Mickelson has 10 to Nicklaus’ 15 and Woods’ 11). And among active players, Mickelson owns the most top-10 results (14). He made a concerted effort this year to focus more on the majors, so this marks his first chance to make good on that task, even if he has yet to record a top 10 this season. Rory McIlroy
And of course you’re going to watch McIlroy as well. He’s slipped to No. 9 in the world, but the former world No. 1 has actually been pretty solid this season: three top 10s in five tournaments. However, McIlroy has yet to figure out Augusta. His best finish is T-15 from 2011. Graeme McDowell
You’ll also want to keep an eye on McIlroy’s fellow Northern Irishman. McDowell also struggles at Augusta – best finish is T-12 in 2012, and he’s been cut in four of his six appearances – but aside from getting a victory, he’s not struggling this season. He boasts five top-10 finishes in six PGA Tour appearances, with a season-best third at the WGC-HSBC Champions. Jason Day
Day’s overcoming a thumb injury and wants some revenge on Augusta. The 36-hole leader a year ago, he also held a two-shot edge with three holes to play on Sunday before bogeying 16 and 17. But his third-place result at the Masters was one of three top-eight finishes in the 2013 majors. Day was a combined 2-over-par in those four events, tied with Scott for the best aggregate score among players who made the cut at each major. Patrick Reed
Reed made some noise in January and March with PGA Tour victories, and made more when he claimed he’s a top-five player. Those two wins helped him to No. 2 in the FedExCup standings, but those are the only two times he’s finished better than 13th in 11 events this season. Reed, who starred at nearby Augusta State, will be interesting to watch as he competes in a major for the first time in his career. Dustin Johnson
You’ve got to putt well to play well at Augusta. Johnson has never finished better than T-13 at the Masters, but he’s leading the PGA Tour in putting average (1.692) this season. He’s also third on tour in hitting greens in regulation (72.2 percent) and second in driving distance (310.8 yards). Those numbers are why Johnson is No. 2 on the money list entering the Masters, behind only Jimmy Walker, who’s played six more events than Johnson. Sergio Garcia
Might this be the year the 34-year-old Spaniard gets the major monkey off his back? His history at Augusta wouldn’t suggest that breakthrough is coming this week, as Garcia’s placed in the top 10 in only three of 15 appearances. But he’s got four top 10s this season, including a third-place finish last week in Houston. Garcia sits at No. 6 in the world rankings, the highest he’s been since 2009. Matt Kuchar
No one’s finished in the top 10 more this season than Kuchar, who’s done so six times in nine tournaments. He’s coming off his two best performances of the year – a T-4 at the Valero Texas Open and a playoff loss over the weekend at the Shell Houston Open. Kuchar needs to build off the many strong shots he took last week, not the fairway flub he sent into the water on the 72nd hole that cost him the tournament.