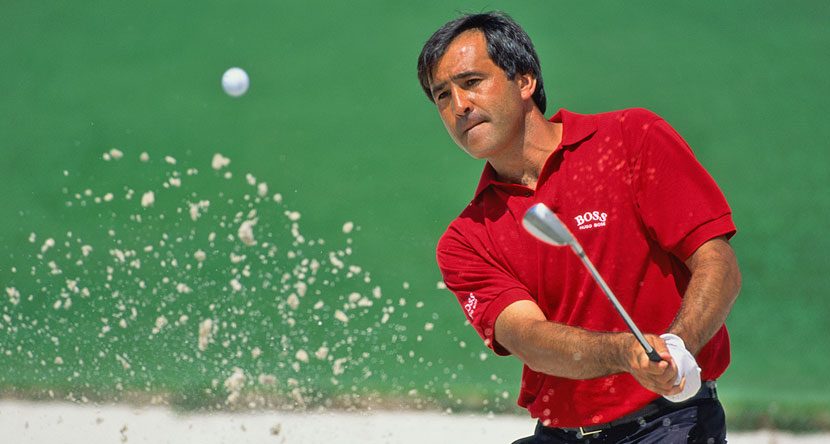 Today – July 22 – marks the 30th anniversary of Severiano Ballestero’s second victory at the Open Championship played on the Old Course of Saint Andrews. We celebrate Seve in his own words:

Severiano Ballesteros Sota was born on April 9, 1957, in Pedreña, a small village in the north of Spain across the bay from the city of Santander.

In Seve’s official biography he said, “When I was a child we didn’t have a fridge, let alone a washing machine. My mother would put our dirty washing in a tub, lift it on her head and walk down to the village washing house. My mother ironed, cooked, did the housework and also helped in the fields and went fishing. She worked 18 hours a day. She’d look at me and say with resignation: ‘Son, you should have been a girl, then you could have given me a hand.’ We were five brothers and not a single sister.”

2) On Playing by the Light of the Moon

He was only 16 when he turned pro in 1974 and appeared at the Portuguese Open. He played his first Open Championship at 18, at Carnoustie in 1975. Seve was committed to golf from a young age and he exuded endless energy and spirit on the course.

The Guardian reports a quote from Seve: “I taught myself a different game. And because I was born next to a golf course, there were times when I would go onto it at night and play in the dark. I learned my feel for the game and how to play unusual shots. Today it is not really possible because of the equipment … everything is geared to hitting the ball in a straight line. It is very hard to maneuver the ball today. I think that takes away from the player who has the instinct to play a more individual game. That’s why there is no point comparing Ben Hogan to Jack Nicklaus to Tiger Woods. The equipment and conditions have changed too much.”

3) On Winning his First Open Championship

He claimed his first major victory at the 1979 Open Championship at Royal Lytham & St. Annes. Only 22 years old, Ballesteros was the youngest winner of The Open in the 20th century and the first player from continental Europe to win the tournament since Frenchman Arnaud Massy in 1907.

A quote from his autobiography reveals, “Wining my first Open was undoubtedly one my greatest triumphs. Nonetheless, it didn’t thrill me as much as you might have expected. I won’t say it left me cold, because you don’t win a major every day of your professional career, but in my innermost self it was something I had been sure I would achieve sooner or later.”

4) On the Key to Becoming a Golfing Houdini

In the book “Natural Golf” he explains how the foundation of all his recovery play was his imagination.

“When in trouble, I always stand directly behind the ball, stare intently at my target, and wait patiently for the movies to begin. Sometimes I see so many shots come to life that I think I’m looking into a kaleidoscope. When that happens, I stay in the same spot as I rerun all the options until I ‘see’ one working better than the others. Then, and only then, do I visualize the specific swing needed to execute the shot, and finally select the proper club for the task.”

In his autobiography, Seve said, “There is no rule in golf that says you have to win in a specific way, only that the winner is the one who cards the fewest strokes. I take the rule literally. If I may say this, my short game was such that I could achieve things that few others could contemplate. This was my strong suit. I enjoyed my opponents trying to second-guess my next move.”

In his autobiography, Ballestero explains his tough times at the U.S. Open: “The U.S. Open and I just didn’t hit it off. We were truly incompatible. I came in third in 1987 at the Olympic Club in San Francisco, which was the best finish I ever managed in the tournament, five strokes behind the champion, Scott Simpson.”

7) On Augusta National & the Masters

For his first round at Augusta National, in 1977, Seve was paired with Jack Nicklaus. Just three years later, he became the youngest Masters champion.

In “Natural Golf,” he relives winning the Masters, after he almost slipped from the lead: “When I looked up at the scoreboard I was shocked to see that my once-so-substantial lead had been sliced to only three strokes. I felt just like I imagine a boxer does when he is being counted out. As I prepared for my tee shot at 14, I truly realized the significance of mind over matter. … Once I began to paint positive pictures of smooth swings and successful results in my mind’s eye, the feeling of confidence I had enjoyed in the three previous rounds quickly returned. Winning took care of itself as I finished par-birdie-par-par-par.”

“This victory made me only the second non-American to win the Masters (Gary Player had been the first). Despite all the mishap I had tasted Paradise, as success in the Masters might be described. I felt complete bliss when the previous year’s champion, Fuzzy Zoeller, put the winner’s green jacket on me,” Seve said in his autobiography.

8) On the Hardest Decision of his Life

At age 50, Ballesteros announced his retirement in the week of The Open at Carnoustie, July 2007.

The Mirror reported Seve’s retirement: “For a few months there was something confused inside of me. … My head said I should retire but my heart kept telling me that I would be better to continue playing and competing. Playing one tournament on the Seniors Tour in America made me think very deeply. And I made probably the most difficult decision of my career as a player and I decided to retire. I don’t have the desire any longer.”

On Oct. 6, 2008, Seve was diagnosed with a malignant brain tumor. He underwent a 12-hour operation, the first of four such operations he would have in an attempt to get rid of the tumor.

In an interview with The Telegraph, reflecting on his health, he reached for a golf metaphor: “It’s like when you start a round, you bogey the first three holes, but there are still 15 left to play. Here I am, more or less, on the 12th hole. Coming back from the operations, from what I have, is very difficult. The damage is all from the brain; it’s not like an accident where I fell down. You know, for everything in life, there is always a beginning and there is always an end. This is the tough part, the most difficult thing, when you see that it’s coming: the end.”