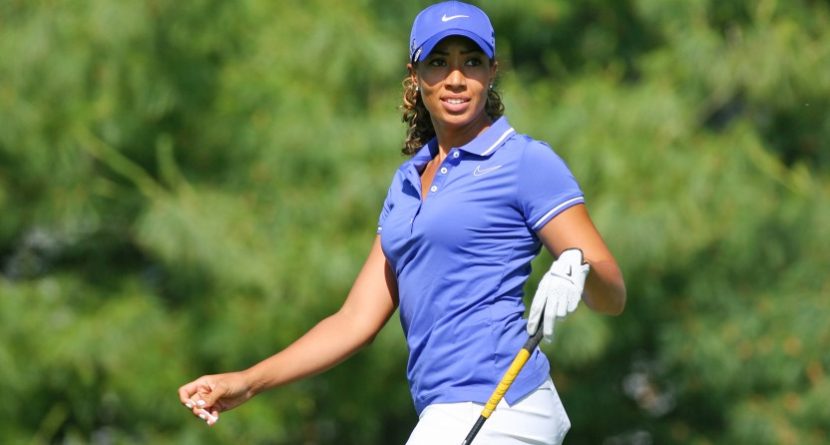 You’ve likely heard of Cheyenne Woods because she’s the charming niece of Tiger Woods. But at 23 years old with one season of professional golf under her belt, she’s looking to make a name for herself in the world of golf. Prior to jetting down to Florida for the final stage of LPGA Qualifying School, the Back9Network ambassador spoke with us about golf, Europe, pet peeves and more.

You spent your first pro season on the European Tour and a lot of people travel through Europe after college. Did you sort of look at it like that?
Yeah, it was fun because that was the one thing while I was in college, I regretted not being able to go abroad anywhere. A lot of students would take a semester and go overseas and I never got to do that, so this was kind of my opportunity. I was over there for a few months. I went to like nine different countries and basically saw the entire world. It was really cool. I loved Morocco, the culture, it was just so different from anything I had ever experienced. So that was definitely my favorite.

You got to play golf at a lot of new and exciting places, but is there a place you want to play but haven’t been able to yet?
If I could go play anywhere I would go play somewhere crazy like Iceland or something. Somewhere nobody ever goes to play golf, somewhere crazy like that. In college I had a teammate from Iceland (Olafia Kristinsdottir). I guess they only have like 10 golf courses in the whole country. But I would see pictures from her hometown and it was like a whole different planet. It was really cool. If you could play a round of golf with any three people, who would they be?
I’d play with Charles Barkley, I think that would be fun. Who else would I play with? Oh, President Obama. And Will Ferrell. How amazing would that be.

If you weren’t playing golf, what do you think you’d be doing?
If I wasn’t playing golf I’d love to get into the media broadcasting, something in that area. I studied communications in college and it’s always something I’ve been interested in, so I’d love to work with like a TV network or a magazine or something. I love being in front of the camera, so anything with the media. If not that, I could see myself being a teacher or something like that. Like a school teacher.

If you could play any other sport, what would you play?
I would run track. I’m not very fast but I think that that would be so cool to run track. I ran track in high school; I did the triple jump and long jump. But if I were to be like 10 years old again and train for a new sport, I would do track and try and be a sprinter. When did you know you were good enough to be a pro golfer?
Well, growing up I always knew that I was going to be a professional golfer one day. But I would say I took it really serious maybe middle school or high school, when I started to play a lot more national events and got a lot more attention nationally. Then also just being recruited by colleges, I really focused on life after college and making that transition to professional golf and doing whatever I could to prepare for what I’m doing now.

Do you have any pet peeves, on or off the course?
On the course it’s slow golfers. I hate playing slow. I hate having to wait. Off the course pet peeve? I don’t know, I’m very laid back. A lot of things don’t bother me… A pet peeve is when people text slow, or when they don’t respond to text messages or don’t answer their phone. That’s annoying.

What is the best gift you’ve ever received?
The best gift I’ve ever got – I was probably 8 years old and my family surprised me with a ping pong table. I for some reason was obsessed with ping pong. We still have it. I play ping pong all the time; it’s one of my favorite things to do other than golf. So that was probably the biggest thing. I cried, I was excited. It was from Santa Claus though, so I didn’t know it was from the family. I usually just play at home with the family, or if we’re out at some game place I’ll play. But I’ve always just loved it.

What is the best gift you’ve ever given?
I would say last year. My mom, she had just gotten a smart phone, she’d never had a laptop, like nothing at all. So I got her a mini iPad when they first came out, and she loves it. She uses it all the time. She’s always looking at my scores on it, takes it with her everywhere, and it’s nice because we can Facetime when I’m overseas. So that was a good one for her.