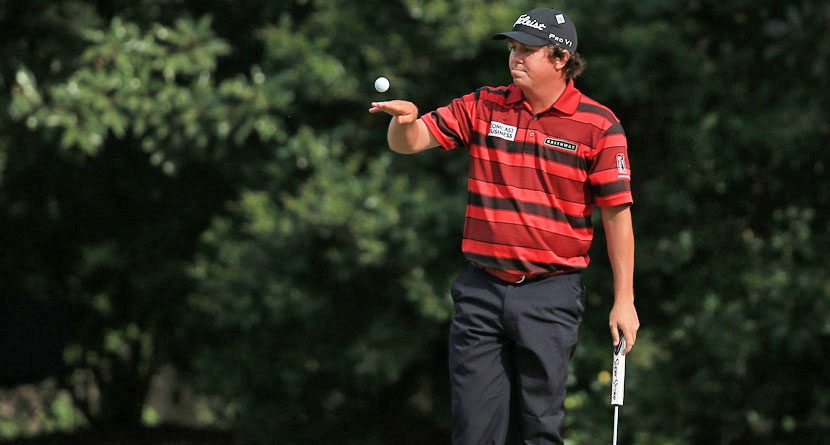 Jason Dufner has done just about everything you could in the game of golf. He turned pro in 2000 but didn’t find much success on the PGA Tour until 2011. Since his memorable duel with Keegan Bradley at the 2011 PGA Championship, Dufner has collected three wins on tour and shot a major championship record-tying 63 en route to claiming a PGA Championship of his own in 2013.

Off the course (and sometimes on it), Dufner is one of the most entertaining golfers around. Be it his live tweeting events like Auburn football games or the NFL Draft, or posting crazy pictures of dangerously loaded cars, Dufner is always good for a laugh. Heck, the guy even spawned a crazy Internet trend last year: “Dufnering,” took the golf world by storm and nearly everyone who’s anyone was posting pics of themselves in the now-iconic pose.

Yeah, there isn’t too much Dufner hasn’t done. Recently, we caught up the “Duf Daddy” during a charity appearance at the Crumpin-Fox Golf Club in Bernardston, Mass., for a round of nine questions.

Your pre-shot “waggle” is pretty famous. How did you end up with it?
The waggle has always been there. Ever since I played the game of golf I remember waggling. There’s no conscious effort or thought about it. I guess there’s some type of relaxation to it. I think I watched a lot of old guys like Sam Snead, Ben Hogan, [Lee] Trevino … all these guys had some type of movement. When I was young, I played baseball a lot. And when I played baseball, you know, I was never static — and I guess I just brought [that] to golf. There’s not even a set number. People tell me sometimes it’s seven, sometimes 10 … I’m not trying to think about it. It’s just kind of a feel thing; when I’m ready, I go. I just like to be moving.

What if you said, “Babe, if I win the Open Championship, I get to buy the Ric Flair robe?”
No chance. I can’t spend that much money on a robe (laughs)”

You’re from the Cleveland area and are a big sports fan. Who should the Cleveland Cavaliers take with the No. 1 NBA Draft pick?
Right now, I’m a little disappointed with the Cavaliers. Once LeBron left I kind of lost touch, to be honest with you. They’ve got some great players. As far as the draft goes, they probably need to take Andrew Wiggins. I think he seems to have the most talent, the most upside and definitely fills a need, so we’ll see how it goes.

What’s your fascination with over loaded or poorly loaded cars?
(Laughs) Yeah, that started a while ago where I just threw out a random tweet about somebody who had randomly stuffed their car and how dangerous it was and now I probably get 200-300 tweets a week of people sharing their insight with me from all around the world. … Yeah, it’s dangerous … I can’t believe they let people drive their cars like that.

After this, will you go heckle KeeganBradley at the Travelers?
No, no … I don’t go to PGA Tour events on my off week.

Having already been a PGA champion, which major do you want to win next?
Probably the U.S. Open. It’s the national open, I always remember thinking that the U.S. Open would be a good fit for my game; I still feel that way. [I’ve] had a couple close calls at Merion and Olympic so, a U.S. Open would  be next for sure.

Do you have any interest in golf architecture?
Oh yeah, definitely. You know, I’ve been reading some books, actually. I’ve been talking to Ben Crenshaw and Bill Coore some, so I’m interested in it. It fascinates me.

You’re painted as one of the calmest guys on tour. Are you as calm as you look when you hit a bad shot?
I think it’s a little of both. There are sometimes when I get pretty irritable out there; I’m just a little better at hiding it. That’s just personal. Everyone’s a little different. You watch all kind of athletes, some guys are cool under pressure, some guys you can see they’re really feeling it … some guys don’t give a sh** like me (laughs). So, yeah … it’s just kind of who I am.