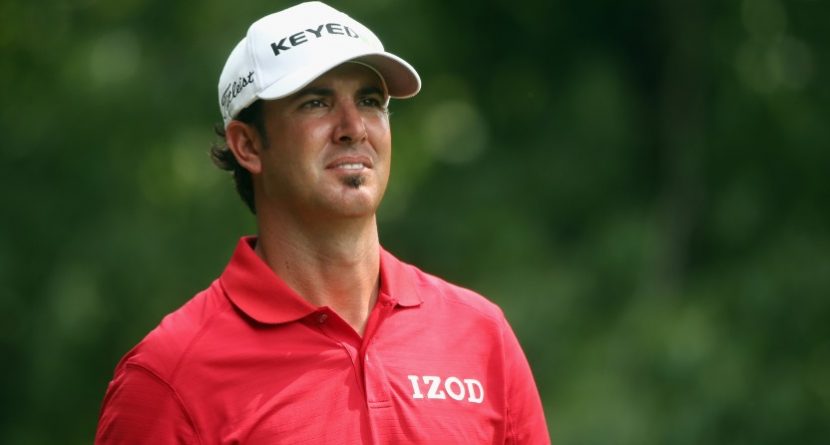 Las Vegas native Scott Piercy is looking to make some noise in this year’s FedEx Cup playoffs, which commence this week with The Barclays at Liberty National in Jersey City, N.J. He’s fresh off a fifth-place tie at the PGA Championship, a career-best result for the 34-year-old in a major.

But first he stopped by the Madison Avenue offices of IZOD in New York City to pick out his apparel for the rest of the year. Afterward, he spoke with us about IZOD, how he approaches the playoffs, and about some of his favorite spots in Las Vegas.

What are you doing out there in New York with IZOD?
I’ve been touring the city. We went to Bryant Park, saw the New York City Public Library, and getting fitted for my fall apparel from IZOD. And then getting ready for The Barclays, the first FedEx Cup playoff event for the PGA Tour, later in the week. I’ve got about seven or eight more tournaments, so they had everything lined out and I just picked what I liked, picked what I didn’t and we get it ready. I really only wear a shirt one time, then I usually sign them and send them back, and then we give them away on Twitter (@ScottPiercyPGA).

How do you approach these FedEx Cup events differently than regular PGA Tour events?
I think you approach them the same way. They’re obviously for a little bit more on the back end with the extra FedEx Cup points and the purses are bigger, and they cut down the fields every week to the top 30 in four weeks. So you put a little bit of pressure on yourself to play well, to get to that top 30, because that means getting into certain tournaments and exemptions, like the Masters, the U.S. Open, stuff like that, that sometimes can be tough. But I think as far as just coming into the week, you try to feel like you’re ready to win and the game’s in order.

How does your performance at the PGA Championship, where you tied for fifth – your best career finish at a major – help going into these playoffs?
It’s a definite confidence builder. The last couple months before it I had been playing hurt, and a couple weeks before that I ended up having to get a cortisone injection in my right elbow just so that I could play. The injury was affecting me enough to where it affected my play a lot, and when your play goes down your confidence goes down too. As the pain went away and I started feeling good, (the PGA Championship) was kind of a result of that. I finally got to practice a little bit and work on the game, which produced some results. I’m still taking anti-inflammatories or Tylenol, but the elbow’s not holding me back. I can practice; I can play without pain pretty much, but I just got to keep doing therapy on it and keep getting it better.

What are some of your interests outside of golf?
It’s mainly family and friends just because I’m gone so much that when I’m home I feel like I need to be spending time with the family. I don’t get to see my friends much, so I just try to hang out with them. And if I’m playing golf I usually play golf with a couple buddies and then I go home to the fam and just kind of kick it.

Does your family (wife Sara; kids Cole, 15, Brennan, 10, and Jett, 3) come out on tour with you often?
On the west coast, when it’s only about an hour flight they’ll come out for the weekends, and when school’s out for the summer they’ll come out during the summer months. But other than that it’s hard for them to miss school a week at a time. They get behind in homework and trying to do homework on the road’s kind of a pain in the butt.

Do you live near the Strip in Las Vegas?
I live 10 to 15 minutes from the Strip. The Strip’s nice to have if you’ve got friends in town or you want to go out on a special night – date night, or go out with a couple buddies, or the wife and a couple couples for dinner. There are the best restaurants in the world in Vegas, so if you’re looking for something special to do, there’s a lot to do. But I was born and raised there. Vegas is home whether it’s a gambling town, a golf town or just an ordinary town.

What are the best and worst aspects of being out on tour?
The best aspect is you get to play a game for a living, get to make a nice living and the fun things that come along with that. The worst part about it is having to travel so much for it. That’s definitely the hardest part that I don’t think a lot of people realize. If you didn’t have to travel, it’d be the greatest job ever because you get to play golf all day and make money doing it.

Do you have a favorite stop on tour?
Wherever I win is my favorite for the year. I like Phoenix (the Waste Management Phoenix Open at TPC Scottsdale) a lot. I like the atmosphere, it’s a fun tournament, and I always seem to play well. Anytime I’m in Arizona I seem to play well. They must have good air there or something; it fits me well. But there are definitely courses that you like and definitely courses that you don’t like, and the ones you don’t like you try not to go back to. But Scottsdale’s one I definitely like going to.

Related Links: What It Takes To Win – Barclays | Odds for The Barclays