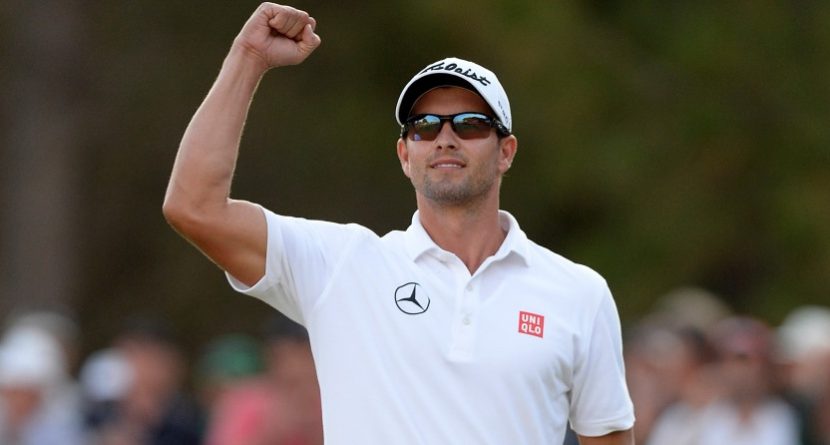 Life is good for Adam Scott. As he turns 34 on Wednesday, he’s ranked No. 1 in the world, he’s recently married, and he’s now among the 100 richest athletes.

Those are just a few of the reasons we love the birthday boy:

1) He’s No. 1
We love golf, and Scott is the best in the world right now according to the convoluted system that is the Official World Golf Ranking. It’s a mystery to nearly everyone as to how those points are acquired, but included in his “counting events” are wins at the 2013 Masters, 2013 Barclays and this year’s Crowne Plaza Invitational.

2) That green jacket
The career-defining moment for the Aussie was becoming the first from his homeland to capture the Masters. He dropped in a clutch putt on the 72nd hole to take the lead, only to be tied minutes later by Angel Cabrera. On the second hole of the playoff, Scott rolled in another lengthy putt to collect his first major.

3) He’s resilient
Scott’s Masters win was all the more impressive because it was an emphatic rebound from his collapse at the previous year’s Open Championship. He held a four-shot lead entering the final round and with four holes to go, then proceeded to bogey each one of those. Scott lost the claret jug to Ernie Els by one stroke.

4) He pulled off a secret wedding
Scott is not one for the spotlight. As great a golfer as he is, he can’t avoid it on the course, but he tries his best off the course. So consider it a success that he married longtime girlfriend Marie Kojzar at his house in the Bahamas, and the media didn’t find out until three weeks later. Oh, and reason No. 4b: He has a house in the Bahamas.

5) He’s sexy
Kojzar is quite the catch, and so is Scott. People say golfers aren’t athletes? Scott’s more fit than many baseball players. He was voted golf’s sexiest male in 2013, and prior to his wedding, Scott reportedly dated actress Kate Hudson and tennis star Ana Ivanovic.

6) He’s Swiss savy
Scott is from Adelaide, Australia, and has that home in the Bahamas. He recently sold a home in Abu Dhabi. But technically his residence is in Switzerland, where he has a home in Crans-sur-Sierre. That’s smart because taxes are a lot lower in Switzerland.

7) He surfs
That home in Switzerland doesn’t afford him an opportunity to ski more, because with a balky knee, Scott doesn’t ski. But he loves to surf, has taken a surfing trip to the Maldives and once said if he could live anywhere in the U.S. it would be Encinitas, Calif., because the surfing is good.

8) His style
Scott is not a flashy guy. He doesn’t use his golf attire to make loud statements, but his clothes do make a statement. These days he’s always seen with a solid-colored polo on top of solid-colored slacks. A Mercedes-Benz logo is prominent on his right chest, with his clothing maker, Uniqlo, on the left. The on-course look is topped off by a Titleist hat. Scott’s other big-name sponsor: Rolex.

9) His aura
The golf game, the good looks, the style – it all just exudes an aura of cool. His stroll around the course. The swing. He even makes the anchored putter look cool. And when he celebrates a huge career moment, when it’s easy to get carried away and whiff on a high-five, he nails it: