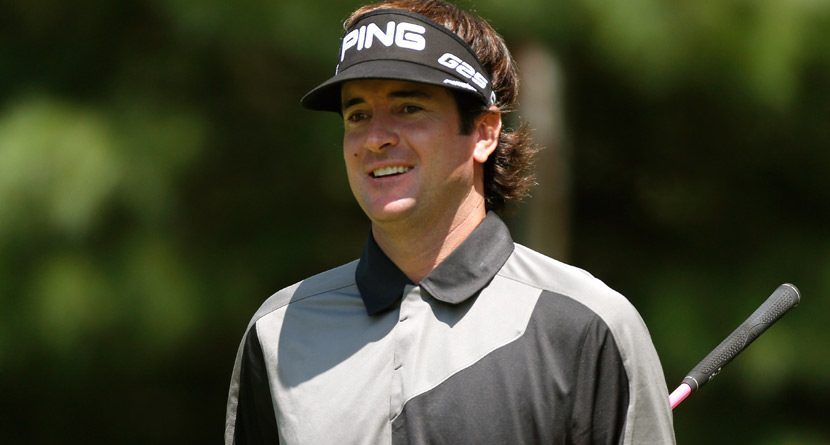 The always-interesting Bubba Watson turns 36 years young on Wednesday, and he’ll celebrate by … working on the other side of the world? Of course, few consider golf as actual work, but he’s in Shanghai set to make his 2014-15 season debut in the WGC-HSBC Champions.

So we figured we’d take this chance to join Bubba’s millions of fans in wishing him a happy birthday. After all, he gives us so much great content, so here are 9 reasons we love Bubba Watson:

He drives a bulletproof truck
It’s a 2013 Ford Raptor Super Crew Cab, with the entire exterior bulletproof (including the windows) and wrapped in a black digital cammo print. On the front is an Oakley grille, and built into the hood is an Oakley logo. The interior features lime green in the leather stitching on the seats, in the Oakley logo on the head rests, on the doors and on the console. That hovercraft golf cart
In addition to the bulletproof truck, Bubba has the 1969 Dodge Charger also known as “General Lee,” a Corvette Stingray, and a custom-made luxury golf cart. But the sweetest vehicle he’s ever driven might be the hovercraft golf cart that Oakley built for him last year. If these things were cheaper and available at more golf courses, the sport would instantly become more popular.

He gives away cars too
Bubba has said some not-so-nice things to his caddie, Ted Scott. But Bubba has also shown some over-the-top love to his looper, like the time he bought Scott and his wife new cars:

The man really engages with fans
Last fall, Bubba held a contest to find his biggest fan, and in the end he chose two families to fly down and meet him in Phoenix at the Waste Management Open. (He almost won that event, taking runner-up.) He also does live Twitter chats with fans under #BubbaTalkLive. And he throws a huge three-day party called Bubba’s Bash, which is a multi-act concert for fans that benefits the Bubba Watson Foundation.

He’s a goofball and for that, you’re welcome
Most athletes enjoy ESPN’s SportsCenter show; Bubba maybe a little more than others. He once made his own SportsCenter video with hopes of getting on the show, then later posted another video and actually got on the show. The folks at ESPN even gave him the opening role in a commercial.

He’s in a boy band
Because Bubba’s goofy, that made him a natural fit for Golf Boys, the first and only golf boy band. The group released two mega hits, and has the entire sports world eagerly waiting for a third.

He’s got friends in high places
Just the other day Bubba hooked up NFL star Larry Fitzgerald and a couple of his teammates with a round of golf at a private club in Arizona. And this past summer he got his “Duck Dynasty” pals into the Greenbrier Classic Pro-Am. That wasn’t the first time Willie and Jase Robertson have hung out with Bubba:

The thing he may be most proud of is his son
Bubba and his wife, Angie, adopted a son, Caleb, soon before he won the 2012 Masters. With his green jacket on, Watson expressed how badly he wanted to get home and celebrate with his family. The father now posts a lot of videos of his toddler emulating Pops around the golf course, like this and this.

The man had a watch made for him
Richard Mille developed tourbillon watch for Watson, the RM 38-01 Bubba Watson, a timepiece that combines a patented G-sensor with a tourbillon mechanism, which helps golfers by providing new insights into their games.