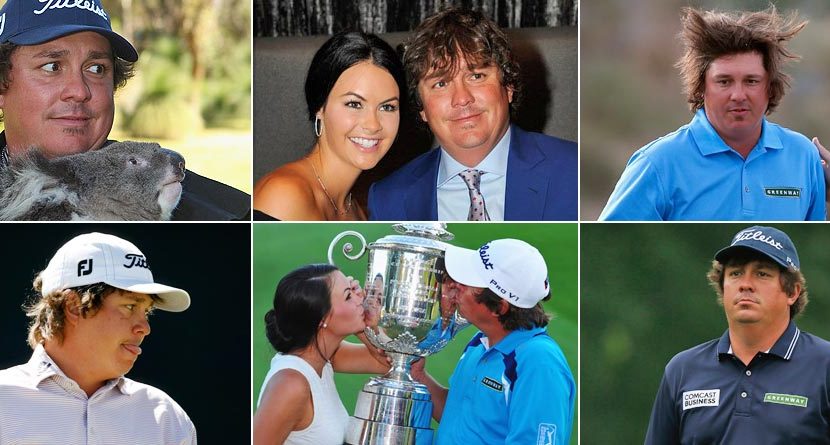 Jason Dufner is one of the most likeable guys on tour. He’s funny, easy-going, and not to mention, a major winner.

Dufner turns 37 on Monday, and we at Back9Network would like to wish him a happy birthday with the 9 best reasons to love Duf Daddy.

“Dufnering” was quite possibly the biggest internet craze of the golf world this past year. It all started when Keegan Bradley tweeted out a photo of Dufner in a classroom of children, looking slightly less than interested in what was going on around him. His fellow PGA Tour buddies didn’t let this photo go unnoticed, as they began posting photos of themselves “Dufnering.”

Jason and his wife Amanda’s dog, Prince Louie, was the newest addition to their family last summer, and he’s made several appearances on both of their social media accounts since then. Jason and Amanda haven’t been shy about taking photos with Louie, even taking the occasional selfie every now and then. One could even argue that Louie resembles ‘Duf Daddy’ himself.

Amanda Dufner has been through it all with her husband Jason. After the two tied the knot in May of 2013, Amanda saw her husband become a major winner a few months later at the PGA Championship. She’s even caddied for him at the Masters for the par-3 contest. Not to mention, her Instagram account is filled with photos of her adventures with Jason. Jason’s hair might be his most recognizable quality, especially after a long round of 18-holes. Granted, with a hat on, all that hair stays in place… but when the hat comes off, there’s no telling where his hair will blow.

Man that Dove Mountain course is rough!!Thanks to all the fans for the support this week. out Arizona. pic.twitter.com/ajJM7xCtPZ

5) The Many Faces of Dufner

Dufner rarely shows any emotion on the golf course, even when on top after winning the PGA Championship. The faces Jason makes are priceless and unlike any other player on tour. One of Jason’s biggest desires in life is something somewhat unexpected: a Ric Flair robe. Dufner expressed his jealousy toward former Carolina Panthers wide receiver Steve Smith for being lucky enough to own one of Nature Boy’s famed robes. He reached out to Flair himself on Twitter, offering a deal in exchange for one of his robes.

@RicFlairNatrBoy let’s work a deal. For one of your robes, I will teach u how to hit laser like drives and iron shots on the golf course.

As an Auburn alumni, Dufner hasn’t stopped supporting his Tigers. He’s even got a street named after him in the town of Auburn, “Jason Dufner Drive.” Jason gave the Auburn football team a speech before their game against Texas A&M in August, a game it ended up winning in upset fashion. He had plenty to say on Twitter when his Tigers took on Florida State in the BCS National Championship game, but unfortunately for Dufner, Auburn was unable to complete the upset against the undefeated Seminoles.

One of Dufner’s good friends on tour is Keegan Bradley. The two are constantly having Twitter wars, posting photos of each other when they’re not quite looking their best. Their bromance is one of the funnier ones on Twitter, but on the course, it’s a little different. Keegan came from behind to beat Dufner at the 2011 PGA Championship in a playoff, but Dufner got redemption a few years later in 2013 when he took home the Wanamaker Trophy.

@Keegan_Bradley Does The topic of “what were u thinking here come up during your interview tonight? pic.twitter.com/8LLtOmbLod

@Keegan_Bradley was doing this to me at the PGA in 2011, I asked my caddy does he need medical attention? pic.twitter.com/Dapf5yGwPb

Hey @Keegan_Bradley, that finger should go up your nose?? U missed. pic.twitter.com/YD6nCxWkhm 9) Relationship with his Fans

Last, but certainly not least, is Dufner’s relationship to his fans. Being one of the best follows on Twitter, Jason gives his fans plenty of laughs and insight into what Duf Daddy is all about.