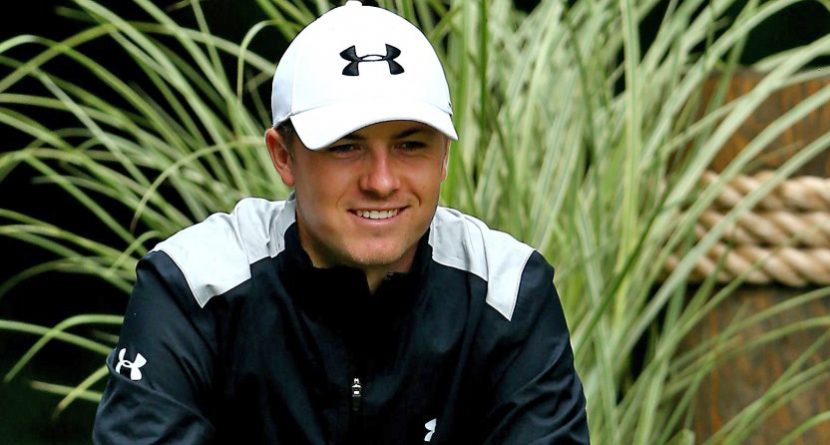 In many ways, Jordan Spieth is far from your average 21-year-old. Most kids that age are finishing up college and beginning the job hunt, but not Spieth. Not even close. He’s far too busy winning golf tournaments and becoming one of the top players in the world.

He continued to do just that at the Australian Open, winning the tournament in dominating fashion with a final-round, course-record 63 to win by six strokes. With the victory, he jumped to No. 11 in the Official World Golf Rankings, solidifying his case as one of the best.

Just look at what he’s done: Last year Spieth became the youngest winner of a PGA Tour event in 83 years, the youngest American ever selected to play in the Presidents Cup (they only take 12), and the youngest player to compete in the Tour Championship, which fields only the top 30 from the PGA Tour’s season-long FedExCup standings.

Suffice it to say he’s not living the life of a normal 21-year-old:

1) He already has a seven-figure salary
While most 21-year-olds are in college trying to stay awake in Economics 101 or Finance 210, Spieth is trying to figure out what to do with the $8.3 million he’s earned on the PGA Tour … and that’s not even including money he’s earned from endorsements off the course. So last fall, he began dabbling in investments. Who says you need a college degree to become smart (he attended Texas for one year before turning pro)?

2) He gives back
Spieth recently started the Jordan Spieth Charitable Trust, which focuses on special needs youth, military families, and junior golf. It’s inspired by his younger sister, Ellie, who has autism.

3) He shoots 63 & wows the world’s best
At the Australian Open, Spieth set a course record with his final-round 63. Granted, records are meant to be broken, but not with the ease in which Spieth did it. Even world-No. 1 Rory McIlroy was impressed, saying “You could give me another 100 rounds today at The Australian and I wouldn’t sniff 63” in a tweet congratulating Spieth.

You could give me another 100 rounds today at The Australian and I wouldn’t sniff 63…. Well done @JordanSpieth very impressive!

4) He has to wear a Rolex
The fine watch company is a sponsor of his. So when he’s not golfing, he’s contractually-obligated to wear a Rolex. If it’s not already in his collection, might we suggest the Submariner?

5) He was the first head-to-toe golfer with Under Armour
The first company to secure Spieth was athletic clothier Under Armour. After making a name in football and basketball, it wanted to jump further into the golf space, making Spieth the first golfer outfitted head-to-toe in its gear. The company picked the right young man with whom to do that.

6) He flies in style
Another sponsor of Spieth’s: NetJets, “the world leader in private aviation.” So instead of logging onto Kayak.com to find a cheap flight to the next tour stop, Spieth hops onto a private jet with other golf elites.

7) He still has great manners
On two different occasions during last season’s BMW Championship, Spieth was spotted lifting one of those ropes that keeps fans off the course for a rather large person. In the middle of his round. And he refers to his elders as “Mr.,” as in Mr. Watson on Sunday.

8) His elders enjoy him
Phil Mickelson organizes “money games” with selected fellow pros early on in weeks preceding an event in which he’ll compete. He’s been doing it for years, and it’s a somewhat select group of guys who get to play. Spieth received his first invitation prior to the BMW Championship.

9) He’s doing things even Tiger Woods didn’t do
Spieth may never have the cultural impact a 20-something Tiger Woods did, but he could be on a similar career path. Spieth was 19 when he first won a PGA Tour event; Woods was 20. Spieth was selected for the 2013 Presidents Cup team as a rookie; Woods could have been in 1996 but was not. And while Spieth was the first player since Woods to begin a season without PGA Tour status and end it in the Tour Championship, Spieth did so at about eight months younger of an age.