9 Things We Love About Keegan Bradley 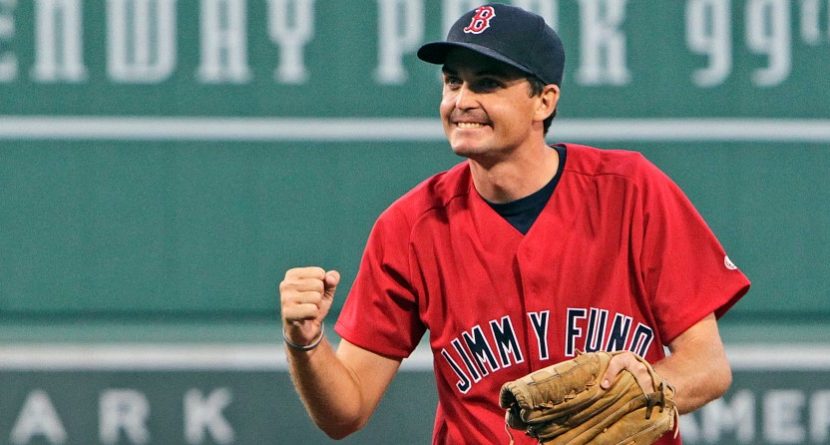 As Keegan Bradley turns 28 years old Saturday, we can’t imagine he’ll do much celebrating. He’s already in Pinehurst prepping for the U.S. Open, so he can’t get too crazy that close to a major. Or maybe he can? The man knows how to have fun.

That’s one of the reasons he’s among the most popular players on tour. Count us among his fans, and here are 9 reasons why:

The lifelong Howard Stern listener loves when fans scream out odd/funny/creative phrases after players hit their shots, especially “Baba Booey,” which is the nickname of the Stern show’s executive producer, Gary Dell’Abate. In fact, he loves the phrase so much it’s been stamped on his clubs.

If Bradley’s not on the course, he’s probably sporting his Red Sox cap. He seriously contemplated staying up late during last year’s U.S. Open so he could watch the Boston Bruins in the Stanley Cup Finals. Patriots quarterback Tom Brady is his “favorite athlete of all time.” That fandom led to Bradley being asked to throw out a pitch at Fenway Park, do the coin toss at Gillette Stadium, and drop the puck at TD Garden. And the St. John’s University grad has his school’s logo prominently on his golf bag. Instagram is how Bradley let the world know about the “Baba Booey” emblazoned on his personalized wedge from Cleveland Golf. His @keeganbradley1 account also features shots of him Tebowing, at Bruins games, and at the Stern Show offices. On Twitter, @Keegan_Bradley has more than 305,000 followers, many of which he’ll interact with. #Dufnering took off due in large part to Bradley’s Twitter prowess. He may or may not have started the popular internet meme, but he was definitely one of the main reasons it spread so quickly.

Speaking of Jason Dufner, that’s one of Bradley’s best friends on tour. So much so that when Bradley heard Dufner was closing out his PGA Championship win last year, he was on his way to the airport but turned his car around so he could congratulate the Duf Daddy in person. After Dufner lovingly tapped his wife’s posterior, there was Bradley – donning a Sox cap – wrapping Dufner in a bear hug. Phil Mickelson is another good pal.

Bradley resides in Jupiter, Fla. So does Michael Jordan. When the two are in town at the same time, they often hit the links together. And last year, Bradley picked Jordan’s brain on how to be mentally tougher. Who else can say they give and get advice from Michael Jordan?

Bradley hasn’t been shy about sharing his insane collection of custom Jordan golf shoes, making every golfer jealous. He’s rocked everything from Bruins-inspired Jordans to Masters green kicks, and he’s likely not done showing them off. The first official Jordan brand golfer is sure to have more custom kicks on tap for the rest of his playing career.

Every player performs a little routine to get settled in for a shot. Bradley’s no different, but definitely unique.

In kindergarten, when Bradley’s class got the ubiquitous question – “What do you want to be when you grow up?” – he promptly responded, “A professional golfer.” That goal seems more attainable when you have one in the family: LPGA star and World Golf Hall of Fame member Pat Bradley is Keegan’s aunt.

Changing with the times

At the 2011 PGA Championship, Bradley became the first player to win a major with a long putter. Now, with the ban on anchored strokes set to take affect in 2016, he is among the first to make the move back to the standard putter. He used one during the Memorial Tournament (May 29-June 1) for the first time since he joined the PGA Tour, and after a suggestion from his mother and some trash talk from Michael Jordan. Bradley didn’t commit to a standard putter from here on out, but he’s planning and practicing for the future.