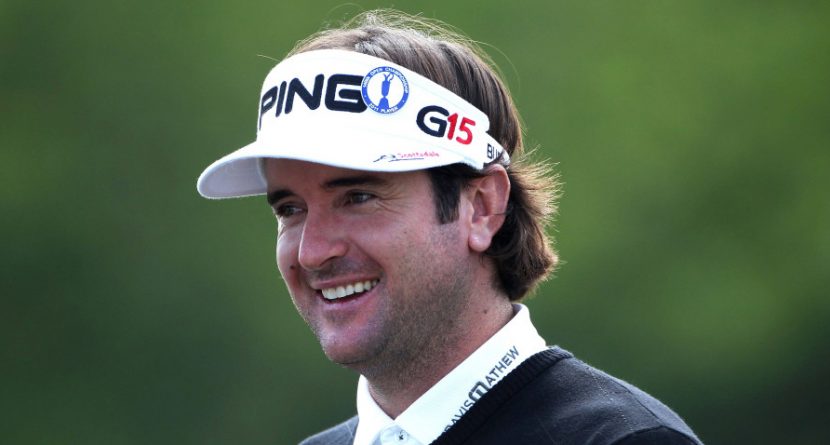 You may think you’ve heard everything about the 2012 Masters champ Bubba Watson’s self-taught game, hot-pink driver, and crazy ability to shape shots. But here are 9 more facts you probably haven’t heard about the man from Bagdad, Florida.

Well, not his legal name at least. Watson’s actual first name is Gerry, which was his late father’s name. Also, as Bubba told David Feherty, it’s pronounced “Gary” and not “Jerry” as most people assume.

8. He’s been on social media since the beginning

Bubba’s currently one of the most active pros on Twitter, but he’s been ahead of the game for a long time. In early 2010 he launched a Twitter campaign to get himself on Ellen, tweeting at her and posting several videos (including one where he sings happy birthday). It worked and he appeared on the show on February 3, 2010.

While Bubba’s well-dressed on the links in Travis Mathew attire, he claims to own only two formal suits for off the course: the two he was given for competing in the 2010 Ryder Cup and 2011 Presidents Cup. He’s probably one of the few millionaires who are more comfortable in overalls than eveningwear.

Tiger Woods has his “Tiger Slam.” Agent Chubby Chandler nearly won the “Chubby Slam.” But Bubba’s close to capturing the career “Insurance Slam” by winning all the tour events sponsored by insurance companies. Before taking home the green jacket, Bubba won the 2010 Travelers Championship, the 2011 Farmers Insurance Open and the 2011 Zurich Classic. Now if he can win next year’s Humana Challenge, he’ll complete a truly bizarre achievement.

5. He dominated at community college

Bubba doesn’t take the usual route when he’s attacking a golf hole-and he didn’t take the expected path in collegiate golf, either. He started his career at Faulkner State Community College in Georgia, where he crushed the local competition with five individual wins, 18 all-tournament honors (out of 20 events played) and a 2nd place finish at the national junior college tournament. After getting his associates’ degree, he went on the University of Georgia where he helped lead the team to the SEC team title.

4. He’s not very into golf history

With his Masters win, Watson joined a list of golf legends that have taken the title at Augusta. Not that he could necessarily tell you who they are. Watson revealed to Sports Illustrated that “I’m not sure how many Masters Tiger has won. Actually, I’m not sure how many Jack has, either.” If his strong play continues, he might end up in the hall of fame someday with a bunch of nobodies like Arnold Palmer and Ben Hogan.

It’s hard to imagine the laidback Bubba turning into the Incredible Hulk, but that’s what happened regularly on the course until early in the 2011 season. Fed up with Bubba’s tantrums after poor shots, his caddie Ted Scott threatened to quit. Watson changed his ways and hasn’t looked back.

Everyone talks about Bubba’s incredible length. He leads the tour with an average drive of 313.1 yards. But like Happy Gilmore, this long-hitter has trouble on the greens. He’s currently ranked 164th in overall putting and 182nd in putts from 5-10 feet. At this rate, there might be a belly putter in Bubba’s future.

1. He hasn’t always been super-thin

The Bubba we see today-lean, lanky and incredibly athletic-wasn’t the Bubba that first came on tour. (Just check out this comparison photo.) Since turning pro, Watson has dropped over 30 pounds by working with trainer Andrew Fisher and improving his diet. Rumor has it that Bubba once loved fast food more than Rickie Fowler loves orange shirts.