9 Things You Need to Know About the Presidents Cup 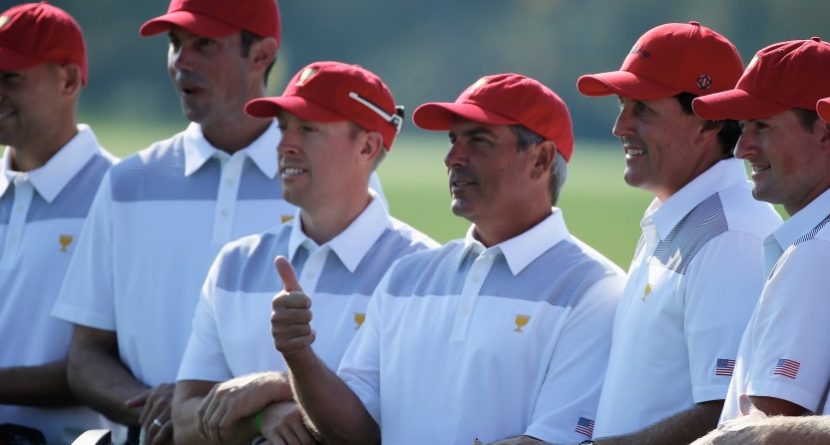 The 10th biennial Presidents Cup tees off Thursday at Muirfield Village Golf Club in Dublin, Ohio. What exactly is the Presidents Cup? We’re glad you asked. Here are nine things you need to know about the event:

1) It’s U.S. against the world
The tournament pits the top American golfers against the best golfers from around the world, not including Europe (the Europeans battle the Americans in the Ryder Cup, which is held during even-numbered years). The top 10 players for each squad are determined by a points system based on their play in professional tournaments, and then each team captain is allowed two subsequent picks for whomever they wish.

2) The U.S. dominates
The event began in 1994, was moved to odd-numbered years in 2003 (after the 2001 Ryder Cup was moved back a year due to the 9/11 terrorist attacks), and the U.S. has won seven of the nine meetings. The international team’s only victory came in 1998, and the squads tied in 2003. Both of those instances came on international soil, meaning the Americans have never lost at home (the venue alternates between a U.S. course and international one). 4) The action starts with fourballs
Presidents Cup play begins Thursday with six fourball matches. A fourball match is between two teams of two players, and each of the four golfers plays his own ball throughout the entire round. Each hole is won by the team with the player who took the fewest strokes. If there is a tie, they “halve” the whole and each team earns half a point. The team with the most points after 18 holes wins the match, thus earning a point for their overall squad.

5) Then it gets into foursomes
Friday features six foursome matches. Foursome matches are similar to fourball matches, but instead of each player using his own ball, each team uses the same ball and the players alternate taking shots. So one player tees off, then his teammate takes the second shot, and so on. Regardless of who puts the ball in the hole, the teammates must alternate taking tee shots as well.

6) Sunday is singles day
As previously mentioned, there are five fourball and five foursome matches on Saturday, and then the Presidents Cup concludes with 12 singles matches on Sunday. Each player is matched up with one from the opposing team, and the winner of the most holes wins the match. If there is a tie after 18 holes, extras are played, as singles matches cannot end in ties. Overall, a team needs to win 17.5 points from the 34 matches to claim the Presidents Cup.

7) The captains choose the teams within the teams
Some guys don’t get along with their Presidents Cup teammates, or in the past have proved not to work well with certain guys. It’s the team captain’s job to know these things and put together the best possible pairings. Fred Couples is the U.S. captain, with Nick Price leading the international team. 8) The Americans boast more experience
The U.S. is led by Phil Mickelson (No. 3 in the current world rankings), who’s competed in every single Presidents Cup, and Tiger Woods (No. 1), who’s making his eighth appearance. The internationals will be led by Ernie Els (No. 23) and his eight Presidents Cup starts, and Adam Scott (No. 2) with six. On the other end of the experience spectrum, the Americans will trot out four rookies to this competition, compared to seven for the international team. And three of those four U.S. newbies boast Ryder Cup experience, while the international players have no other similar tournaments in which they can gain familiarity with team events.

9) Most every player is familiar with the course
The Muirfield Village course is a regular stop on the PGA Tour, hosting the Memorial Tournament each spring since 1976. Every player on the U.S. roster has played it at least once, while all but two international guys have competed on it. Japan’s Hideki Matsuyama and South Africa’s Richard Sterne aren’t regular PGA players, and in addition to making their first Presidents Cup appearance this week, they’re also seeing Muirfield Village for the first time.