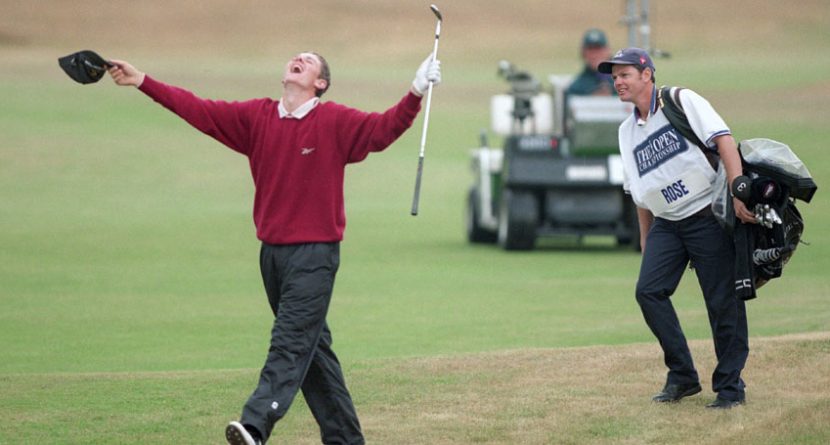 Every year golf fans are treated to a major that features what many call the purest form of the game: the Open Championship. Stormy winds, pouring rain and waist-high rough are just a few of the unique challenges seen at this major championship. Players are tested in a variety of ridiculous ways, leading to some of the most memorable – and sometimes forgettable – moments in golf.

The Collapse at Carnoustie
Thirteen years later, this is still painful. Standing on the 72nd hole at the 1999 Open Championship, Frenchman Jean van de Velde needed only a double-bogey to win. Before the hole was over, his pants would be rolled up to his knees and his dignity would be lost. Try to watch without cringing:

An Off-the-Wall Player
Wild man Miguel Angel Jimenez likes to live dangerously: cigars, fast cars and red wine. So it was no surprise that he attempted this risky bank shot at the 2010 championship at St. Andrews:

Loosening Up
Speaking of Jimenez, how does the man they call “The Mechanic” warm up for a round? Well, it starts with plenty of awkward stretching to get his wheels greased. Cancel this weekend’s yoga class and try these moves that Miguel modeled at the 2011 Open (and others):

Extra Embarrassing
Welshman Ian Woosnam always looks like a tiny volcano that’s just about to erupt — and at the 2001 Open, the crowd had a front-row seat for Mt. Vesuvius. Realizing he’d receive a two-stroke penalty for having an extra club in the bag, the one-time major champ did a little redecorating to the Royal Lytham & St Annes shrubbery. Worst of all, Woosie was tied for the lead at the time.

Bunker Buster
On Open links courses, bunkers aren’t just an inconvenience; hitting into one can destroy your scorecard. At the 2003 championship, Thomas Bjorn ventured into a greenside bunker on 16 at Royal St George’s in the final round with a two-shot lead. His first attempt out rolled back in. Same with his second. His third finally stayed on the green, but the double-bogey erased his lead. Bjorn lost the championship by one stroke.

St. Andrews Stunner
At the 1995 Open, Costantino Rocca came to the last hole needing a birdie to tie John Daly. He flubbed his approach shot but then holed a 65-foot putt from the “Valley of Sin” to tie the Arkansan in the clubhouse. Daly and his mullet prevailed in the playoff, but this remains as possibly the greatest shot in Open Championship history:

Hold On to Your Hats
The best Open Championships are played in gale-force winds, freezing rain or both. At the 1995 Open, the wind showed Ian Baker-Finch (and his hat) who’s boss during his very first shot. The announcer’s wise-ass commentary is the icing on the cake:

Teenage Dream
Justin Rose was just a young Cinderella boy out of nowhere when he played in the 1998 Open. As a 17-year-old amateur, Rose holed out his final shot of the tournament from deep rough and forever etched his name in Open history:

Beep Beep! Playing Through
Of all the strange moments at Open Championships over the years, this might be the most bizarre. During the 1979 event at Royal Lytham & St. Annes, Seve Ballesteros hit a drive under a car in a temporary parking lot (seen at the 3:15 mark in this video). What’s really odd is not that there were cars on the golf course, but that they weren’t even out of bounds. Seve got a free drop right next to a Ford and went on to win the claret jug: