A PGA Champion Couldn’t Pay For His New Clubs 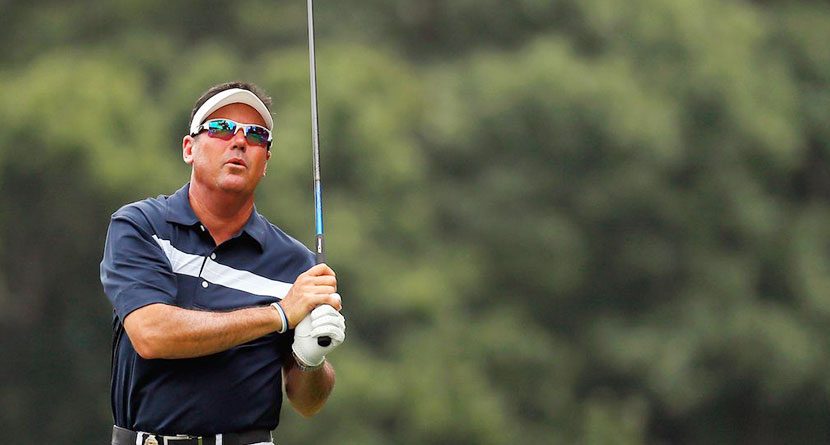 Whenever a pro hits a shot from the cart path or wraps a club around a tree trying to punch out, you inevitably hear some version of “it must be nice to get free clubs,” from the announce team. Those worlds collided this week at Baltusrol when current Sky Sports announcer and former PGA Champion Rich Beem teed it up in the 98th PGA Championship.

No longer a regular on the Tour, Beem isn’t as privy to the Tour equipment trucks as he once was. Looking for a new set of sticks to use in this week’s tournament, Beem sought out the newest and hottest name on the equipment scene: Parsons Xtreme Golf. Not being exempt on Tour, nor having a sponsorship with PXG, Beem had to shell out the $2,800 for the high-end clubs just like anyone else.

GolfDigest.com’s Mike Johnson explains the backstory of how the timely use of a maxed out credit card, combined with some solid golf this week saved Beem $3,000.


According to PXG PGA Tour rep Matt Rollins, Beem first expressed interest in PXG clubs at the CareerBuilder Challenge in January. Rollins informed Beem that the company was only giving free product to those with fully exempt status on the PGA Tour as well as those under contract. This is a practice that has increased in recent years with other companies as well, as manufacturing costs have increased and companies have grown weary of “club whores” taking equipment with little intent of using it in competition.

Beem understood, ordered a set for some $2,800 and gave the credit card. The card was run three times on three separate days and declined. “We knew we’d see Rich so there was no urgency,” said Rollins. “Just some sort of mix up. Not a big deal. He gave me another card about a month ago but I hadn’t gotten around to running it. In the meantime, he had us re-shaft his irons. When I saw him earlier this week I said, ‘If you play well we won’t charge you for them.’ After his first round 69 he texted me, saying, ‘Was that good enough?’ ”

“It’s a really difficult line, telling players they have to pay for clubs,” says Rollins. “You have to do it in a way that doesn’t offend people, but if we gave clubs to everyone — or if any company gave clubs to anyone — it gets pretty expensive in a hurry.”

Of course the irony is that PXG told Beem the clubs were on the house and now that Beem has made the cut, that credit card might be good come Monday.

Holy crap, I made the cut!!! Thanks for all tweets, sorry I can’t reply to them all!!! Cheers!

Given that he made the cut and his clubs are free again, we might see Beemer hit a shot or two off of a cart path this weekend.