A Weighty Crown: McIlroy and Toothaches 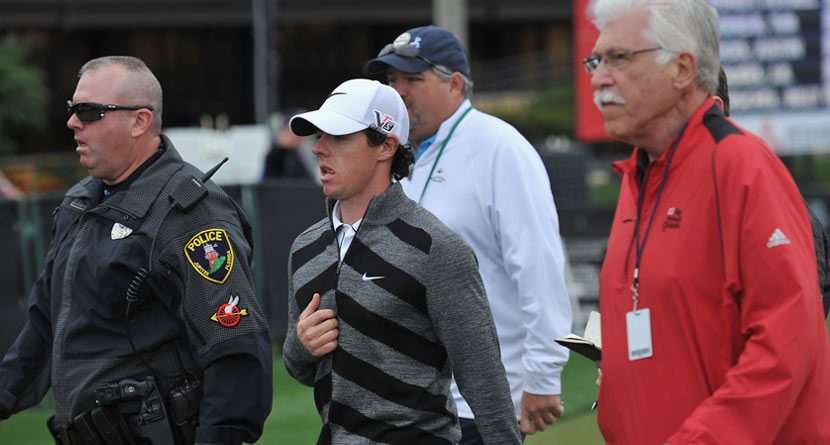 In golf, rounds die at the hands of their players’ worst intentions all the time.

The temptation to vandalize a scorecard is always lurking somewhere in the background, waiting to rear its head should etiquette and composure suddenly lapse. It’s the urge to add insult to one’s own injury, preempt disappointment with an attention-grabbing calamity – a fluffed chip, a nonchalant 10-footer for double, a full-blooded tantrum. Consider it the ugly bi-product of all that lonely introspection and thwarted expectation.

Petty stuff, no doubt; the sort of thing the world No. 1 is usually above. Usually, but not always.

On Friday morning, Rory McIlroy began the second round of the PGA Tour’s the Honda Classic, a tournament he won last year, on level par. Roughly two hours later, having dropped seven shots in a mere eight holes, he’d slipped amongst the lost souls at the tail-end of the 142-man leaderboard. A third disappointment in as many tournaments had begun to look an inevitability. What little hope of returning to the cutline remained would rest on his approach to PGA National’s par-5 18th, a 240-yard carry over a water hazard flanking the right side of the hole. Pulling a shiny new fairway wood from the bag, he settled over the ball and, with a swish of the clubhead, pushed it a wet 230.

Ten minutes later, and having paused en route only to tell a group of bemused media types he was “just in a bad place mentally,” the Northerner quit the venue.

The withdrawal was registered online within seconds, causing Twitter to disolve into a feedback loop of reprocessed information, hows and whys mingling freely with snippets of second-hand witness statements. But there was little to round; information wasn’t exactly forthcoming. Even Conor Ridge, McIlroy’s agent, could muster only an expression of disbelief: “He’s not hurt. He’s not sick. And he won’t answer his phone. I don’t know.”

The truth, perhaps, but hardly the stuff of public relations gold.

The PGA Tour took an altogether different tack in its bid to explain the incident, in the process stretching the limits of credibility so far beyond breaking point as to give birth nearly instantaneously to a social media meme. They and McIlroy, it turned out, would have us believe the 23-year-old didn’t answer his phone because he was crafting a suspiciously coherent and dispassionate press release blaming his poor performance on an aggravated wisdom tooth. Well played.

Though it’s easy to be flippant about the incident itself – it was unquestionably bizarre – dismissing it merely as the product of youth or some sort of momentary confusion seems a little unproductive. Indeed, in the rush to forgive, it’s easy to overshoot the mark somewhat and lose sight of the broader picture. Friday’s farce, after all, wasn’t acted out in a vacuum.

Since signing a multi-year endorsement contract with Nike late last year, reported to be worth somewhere in the region of $25 million annually, McIlroy has not played well at all. His transition to the corporate stratosphere, that rarefied realm of Woodses, Jordans and, once upon a time, Armstrongs, has been beset by hiccups and setbacks.

No doubt these can be attributed in part to his natural inconsistency – McIlroy’s not cut from the same reliable cloth as his erstwhile idol and current stablemate – but it’s his equipment that has borne the weight of scrutiny. Murmurs about the long-term implications of his decision to abandon Titleist in favor of Nike have grown more shrill with each subsequent defeat. And Friday, after weeks of fitful tinkering, the world No. 1 made it clear the extent to which such prophecies can be self-fulfilling. He walked the course, and left it, looking like a man utterly shorn of confidence, bereft of the certainties on which he’s built major-winning career.

If the contents of that new, swoosh-emblazoned bag have become the locus of any residual doubt or anxiety he’s carrying about changed circumstances and sky-high expectations, Rors could be in for a very rough ride to Augusta National indeed. Competitive appearances may steady the ship in time – Tiger would no doubt attest to the value of “reps” when it comes to reclaiming lost ground – but they won’t necessarily address the root cause of the affliction itself.

Placing stock in the doubts or opinions of critics, broadcasting your own fragility to the world at-large: venial sins were you or I to commit them, but unforgiveable in an athlete who aspires to the status of brand-slash-myth. Life in the spotlight can be uniquely unforgiving. Like Tiger, Rory might need to find a place beyond dialogue and rational inquiry, behind a bulletproof wall of clichés and an entourage adept at easing worries.