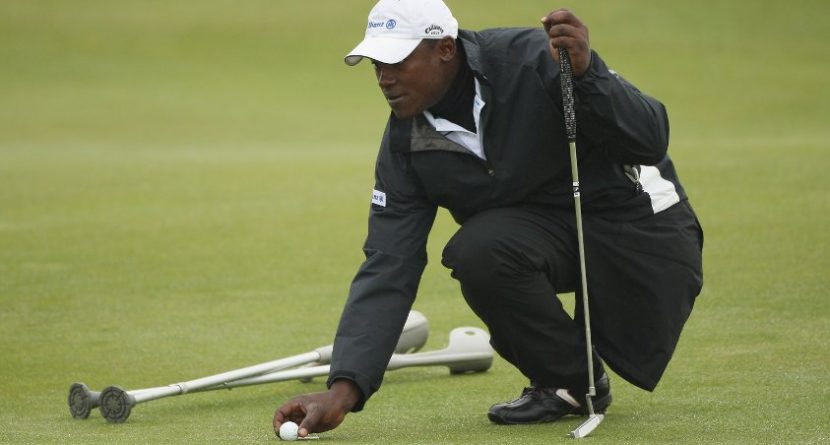 New Americans with Disabilities Act provisions governing access to golf courses by persons with a disability take effect Jan. 30, and architects and course owners are scrambling to assess the ramifications for their golf courses.

The new provisions, which will be enforced by the U.S. Department of Justice, require at least one 48-inch wide pathway providing an accessible entrance to each green, access to at least one teeing ground on each hole (which does not have to be the forward tee) and access to least one practice facility station or 5 percent of all the stations, whichever is greater.  Access to bunkers is not required at this time.  All golf courses are obligated to conduct “access studies” to determine their compliance with the law.  The law applies to every public golf course in the country as well as every private club which provides public accommodations.

Several trade organizations and associations have been proactive in coordinating awareness of the new rules among their members, including the California Golf Course Owners Association, the American Society of Golf Course Architects, and Golf Course Superintendents Association of Americas.  According to the notice sent by the GCOA, “Generally speaking the ADA requires golf courses to meet specific standards.  If the requirements are not ‘readily achievable’ a safe harbor exists for non-compliance.  To be exempted, the golf course would have to show that the cost of making its course accessible is beyond its financial means.”

Publicly owned courses, however, are not granted this safe harbor, and all courses are required to do an accessibility study.

One prominent golf course architect called the new rules a “game changer,” and added, “Goodbye bent grass, hello fescue,” alluding to fescue’s ability to be hardier when dealing with surface pressures.  His fear is that by allowing golf carts on greens, the turfgrass conditions will deteriorate.

Others are more optimistic.  Writing on Internet site GolfClubAtlas.com, pre-eminent golf course architect Tom Doak said, “You have to be able to get a riding mower to every green and tee, so handicapped access is not really a big deal.  If the law means that people with disabilities are going to use it as an excuse to drive a golf cart right onto a green, there could be some interesting moments.  And possibly more clubs will quickly add some of those Casey Martin one-man carts.  But golf courses aren’t going to change the grass on all the greens because of this rule.”

The vehicles in question have wide, pressure dispersing tires.  Moreover, courses will still have the right to deny carts access to greens if conditions would dictate that such cart access would damage the green, such as after a rain storm or a frost.

Architect Jeff Brauer, who was the American Society of Golf Course architects liaison to the ADA rules commissions meeting back in the early ’90s believes architects won’t be overly burdened.

“I’ve been building greens that way for the last 15 years.”

Still, another Internet commentator irreverently, but accurately noted, “Reasonable [is] the most dangerous word in law.”

Since the ADA statue is complaint driven, non-compliance actions are possible.  Complaints can take the form of private lawsuits or, in the case of large businesses showing a pattern or practice of discrimination, prosecution by the Department of Justice.  In a similar scenario, the DOJ began prosecuting prominent New York City restaurants for non-compliance with accessibility rules.  The iconic Rosa Mexicano restaurant was the first named defendant in what is expected to be a deluge of litigation against the most popular NYC restaurants in the Zagat’s Guidebook.  Having never been the subject of any prior complaint, Rosa’s takes issue with both the accuracy of the government’s claims of inaccessibility and the pretext of the restaurant’s Zagat’s popularity as a reason for being singled out in a lawsuit.

As such, some are concerned about the possibility of a wave of opportunistic litigation against golf courses, citing the examples of Florida and New York City lawyers bringing hundreds of ADA lawsuits against mom and pop businesses who can ill afford expensive litigation and bad press, and therefore just pay up.  Moreover, according to an advisory sent out by the National Alliance for Accessible Golf, the second most important person at the golf course (behind the owner) is the course attorney – even more so than the architect.

“That’s never good news,” said one New York City golfer.  “We tend to over-lawyer things far too much in this country and it’s bad for business.  You can’t make money and hire employees with lawyers breathing down your neck.  It’s bad for the economy too have too much regulation and litigation.”