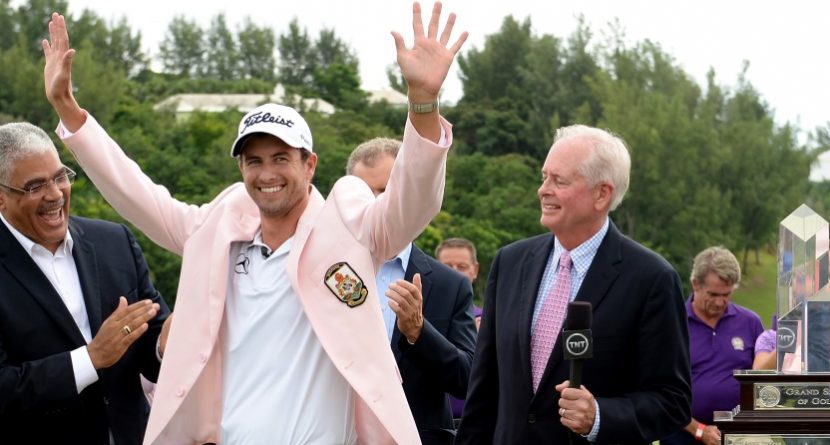 Adam Scott was the best player at the majors this year, collecting a +2 aggregate score over the year’s four biggest events. He was also the best golfer at the specialty event pitting the year’s major winners against each other.

Scott won the PGA Grand Slam of Golf on Wednesday in Southampton, Bermuda, firing a 7-under 64 to hold off good buddy Justin Rose by two strokes. That was good for a Port Royal Golf Course record, eclipsing the 65 that three players had previously shot.

The Aussie finished 8-under overall, with Rose at 6-under, Jason Dufner 3-under and Padraig Harrington 3-over in the two-day, 36-hole tournament.

Scott’s victory became possible when he sent his second shot on the par-5 17th hole to two inches. The tap-in eagle took the lead from Rose, who entered the day with a two-shot edge. He managed four birdies in the first seven holes Wednesday, but bogeyed 9 and 16. Meanwhile, Scott was at a four-stroke disadvantage with 10 holes left, but played a bogey-free round and picked up five birdies before his eagle.

For the win, Scott collected $600,000, while Rose received $300k, Dufner $250k, and Harrington $200k. The Australian also added a pink jacket to his wardrobe, which already includes a green jacket from winning the Masters in April.

Scott earned a spot in Bermuda by winning that Masters title, Rose did the same by taking the U.S. Open, and Dufner by claiming the PGA Championship. Harrington got in after Open Championship winner Phil Mickelson declined his invitation. Harrington won the Grand Slam of Golf in 2012, when he was also a replacement, so being the defending champ meant he was the first alternate.

The guys wore mics throughout the tournament. If only they could do that during more events: