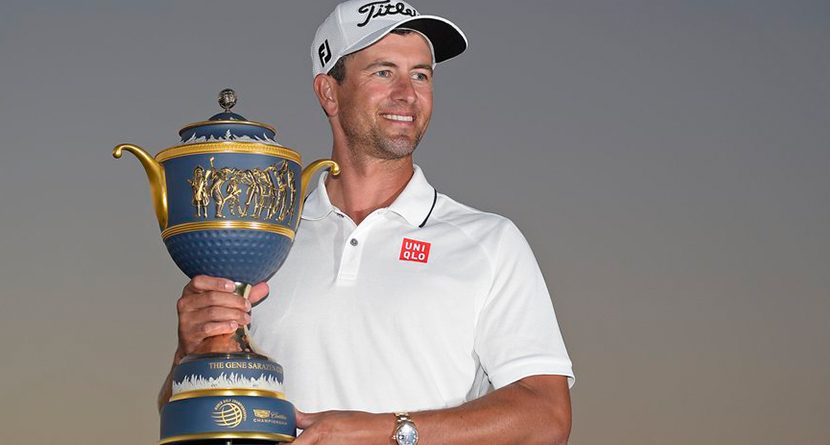 Multiple times on Sunday at Doral, the first World Golf Championship of the year looked to be a done deal — for Rory, for Bubba, even for Scott — until it wasn’t. It took a stroke of good fortune and an exceptional up-and-down from last week’s winner, Adam Scott, on the 72nd hole to claim his second victory in as many weeks.

Scott, the short putter’s prodigal son, proved for the second week in a row that a world-class ballstriker needs only a passable putter to come out on top of a world-class field. The 2013 Masters champion led the field for the second consecutive week in strokes gained: tee to green and improved upon his standing in the strokes gained: putting statistic, moving up from 23rd at the Honda Classic to 17th at the Cadillac Championship.

Scott came from three behind 54-hole leader Rory McIlroy to earn his 13th PGA Tour victory. McIlroy struggled through the middle portion of the round, making his first birdie of the day on the 16th hole, but by then it was too late. McIlroy slipped to a tie for third and will still accumulate enough world rankings points to get hop to No. 3.

As for Scott, he will move to No. 6 the world, just two weeks removed from being 13th in the world.

Here are the notable shots from Sunday at Trump National Doral:

Everybody knows about Bubba Watson’s length off the tee.

What about his range with the flatstick? #QuickHits https://t.co/35cjERM7ub

If every hole was like this, Graeme McDowell’s caddie wouldn’t have to carry a putter. https://t.co/XWd9AbIwLq

Quite the stretch for Jimmy Walker. #QuickHits https://t.co/5LNDwTXgRe

Adam Scott goes for it at the 72nd hole …#QuickHits https://t.co/LZADiU5QjW

A flop from Scott. #QuickHits https://t.co/rMfrejLpVF

Adam Scott has won the @CadillacChamp!