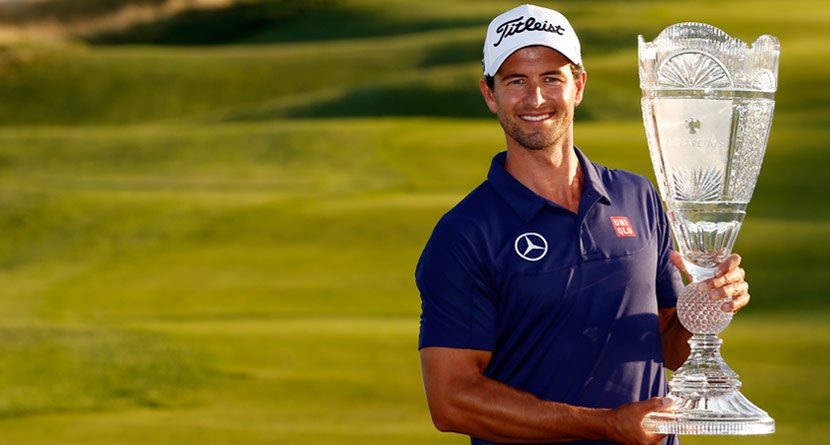 It was an exciting final few holes at Liberty National, including a charge by Tiger Woods, but Adam Scott is your 2013 Barclays Champion.

Gary Woodland led most of the day while players like Scott, Woods, Justin Rose and others seemed to fly around the top of the leaderboard like a bunch of gnats. Woods – the heavy favorite heading into the week as is usually the case – struggled with back spasms throughout the back nine. After tweaking his back on hole No. 12, Woods was literally brought to his knees after his second shot on the following hole.

However, Woods still had a bit of magic left in his golf bag as he made birdie at hole Nos. 16 and 17, bringing him to the 18th tee at 10-under par and one shot behind leader Adam Scott, who headed to the driving range to stay warm in the event of a playoff. Woods’ approach shot on 18 went long, leaving him 30 feet for a lead-tying birdie. Woods left the putt short by one inch, ending his day one shot back.

That left Gary Woodland as the only man on the golf course who could tie Scott. After getting a lucky bounce in the fairway on 18, Woodland stuck a 9-iron to 13 feet from 178 yards out. Woodland left his birdie effort offline, however, giving Scott his second win of the year including The Masters.

Scott is making a serious case for Player of the Year honors, having now won twice in 2013 including a major. Woods is still the likely favorite at this time having five wins under his belt, but we will have to see if that changes as the FedExCup Playoffs continue next week at the Deutsche Bank Championship in Boston.

Will Tiger’s Back Keep Him Out of Deutsche Bank?

Immediately following his final round, Woods was asked if his sore back will keep him out of the second round of the FedExCup Playoffs.

“Everything is hypothetical right now,” Woods replied. “I just got off the course and I’m not feeling too hot right now.”

Woods could presumably skip next week’s event and still qualify for the BMW Championship in Chicago as he is leading the FedExCup points standings at the time of this writing.

Jonas Blixt and Rickie Fowler dressed in the exact same outfit for Sunday’s final round at The Barclays. Both PUMA Golf staff playing pros, Blixt and Fowler even hit balls at the driving range before their round right next to each other. According to Brian Walker of PGATour.com, the two men agreed to pull off the stunt after learning they would be pairing in their final round. The 16-year-old female golfing sensation Lydia Ko successfully defended her title at the Canadian Women’s Open after firing a 6-under 64 on Sunday. While Ko is still an amateur, the win at Royal Mayfair marked her fourth win in a professional event.

Ko has been phenomenal while playing in professional events, having participated in 14 LPGA Tour events since 2012. She became the youngest female amateur to win a tour event at the age of 15 years, 4 months and 2 days last season and has made the cut in every tournament since.

On the European Tour, Tommy Fleetwood captured his first tour title by winning the Johnnie Walker Championship. The Englishman birdied the first playoff hole after doing the same on his 18th hole to finish with a final round 70.

“It’s just unbelievable as it’s been a lifetime goal to win on the European Tour,” Fleetwood told the New York Times. “I’m sure there will be bigger and better goals in my career but this feels absolutely amazing right now.”