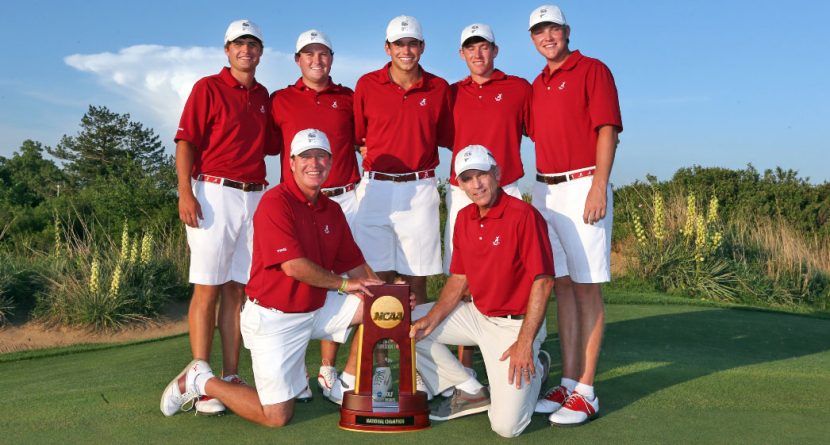 Alabama senior Trey Mullinax sealed the Tide’s second national championship in as many years in dramatic fashion Wednesday, when he buried an eagle putt on No. 17. The putt capped off a victory for Mullinax, beating Ian Davis 2 and 1, giving Alabama its third win of the day. The Crimson Tide went on to win 4-1 over Oklahoma State, becoming just the second team to win consecutive championships since 1985.

Being the biggest collegiate tournament of the year, several PGA Tour players recognized Alabama’s achievement, as well as the effort by the Cowboys. As expected, a few former Tide golfers — Bud Cauley, Michael Thompson and Dicky Pride — congratulated the guys at their alma mater, and a few other pros chimed in as well:

couldn’t be happier for the guys! Back to back National Champions! Roll Tide Roll!!

Proud to be a Bammer! #RollTide #BamaGolf

Congratulations to @AlabamaMGolf on back to back national championships. @jcwellbamagolf and @BamaCoachMcGraw great job all year. #RollTide

Congrats Bama on winning back to back. Impressive stuff. Looking forward to playing with @cory_whitsett on Monday. I bet @BudCauley is happy

Congrats to Alabama golf on the national title. One heck of a team.

Congrats to OSU golf, coach Bratton and all the kids. Hold your head high.

That a baby Robby Shelton!

I know it’s tough but hold your heads high boys…it was a solid year @OSUCowboyGolf…congrats to Bama Golf on being national champs!

Alabama’s Bobby Wyatt and Cory Whitsett are expected to turn pro, with Wyatt making his pro debut at the Travelers Championship in Cromwell, Conn., in June.

Other Hot Links:
– To Push or Not To Push a Cart: Tour Pros Weigh In
– 5 Things You Need to Know: The Memorial Tournament
– Jimmy Fallon Gets Personalized Justin Timberlake Balls
– The Fringe: Poulter Booted, Nantz ‘Not Good’ & Murray’s Advice
– Video: How Golf Balls Are Made
– Vintage Golf Cart Helps Satisfy Coffee Fix