Along the Cart Path:~Hello, Mr. President 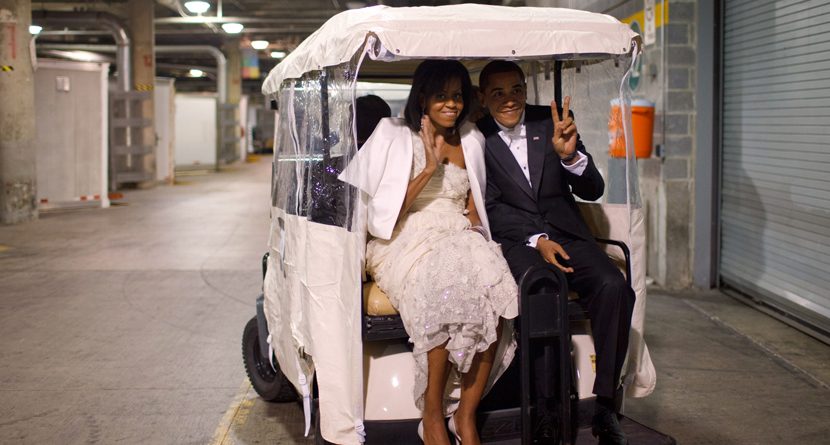 I was reminded recently of a most unusual encounter along the cart path from a while back.

What happened that day was memorable to say the least.

As the emcee for a local charity tournament I decided to wear a pair of Loudmouth Golf pants – the pink argyle print to be exact. Sonja, who was helping with the events of the day, chose a Loudmouth hot pink skort.

About a week before the tournament, those of us participating received word that President and Mrs. Obama were making a weekend visit to Asheville and would be staying at the Grove Park Inn Resort. They were scheduled to arrive the afternoon of our charity tournament. We were asked to provide some personal information that would go to White House security to check out. Nothing, however, would change with the schedule of our tournament that day.

Friday, the day of the tournament, was a beautiful sunny day in Asheville. Sonja and I got there fairly early to help in any way we could. The shotgun start would come at 1 p.m., so the check-in process began at about 11 a.m. There were 100 players to check in, buy Mulligans, get their lunch boxes and prepare for the start.

Everyone arrived in a timely manner, and my emcee duties began shortly before 1. I had already gotten a lot of comments on my pink argyle Loudmouth pants. But the day was early and more comments would come my way.

After all the players left the start area to begin play, Sonja’s account of the events began near and around the pro shop. Here’s what she recalls:

It was shortly after the tournament started that we knew President and Mrs. Obama were not far away. Secret Service descended on us, some walking, some in golf carts, with rifles quite visible.

I wanted to head up to the main lobby of the resort and shop a bit, but was told I could not walk the path there. I would have to take the shuttle. Waiting for that shuttle took forever. I felt like the Secret Service guys were watching my every move. Then all of a sudden there they were. The President’s motorcade was in clear view, coming in the back way close to the pro shop. It was a spectacular sight since I’d never seen a presidential motorcade in person.

A while later the shuttle came to pick up anyone wanting to go to the main lobby of the resort. But before we could get there, the shuttle was stopped and we all had to disembark while security personnel and dogs came on board. Once they gave the go ahead, we re-boarded and proceeded to the resort lobby entrance.

Inside there were police and Secret Service everywhere, but I was allowed to move about freely — that was until I approached the wing of the resort where the shops were. I had to go through a checkpoint similar to airport security in order to visit any of the shops. I later learned that that wing of the resort was where the Obamas stayed.

Returning to the pro shop I had to use the shuttle, stop at a checkpoint, disembark for security clearance and re-board. Security back around the pro shop seemed tight.

I had left my cellphone charging in my car, parked adjacent to the pro shop. As I headed to my car to retrieve it, all eyes were on me. What I didn’t know until later was that phone signals were scrambled in that area, and I couldn’t use my phone anyways.

Back on the course, Tom was nearing the end of his round. Here’s the rest of his story:

I had just finished No. 16 with a nice birdie and was heading toward 17 in my cart. As I approached the hole there was a procession of golf carts headed my way. I could see that some of them were Secret Service and those weren’t clubs in the bags on the carts. But it wasn’t until he was a couple of feet from me that I identified the driver as President Obama. As he passed me he looked at my pants, smiled and said, “Nice pants, man,” and off he went.

All I could say was, “Thank you, Mr. President.”

For a split second I thought about jumping off that cart and shaking his hand, but this story would have probably ended differently.

That charity tournament was a success in many ways. We raised a lot of money and everyone remembers those pink argyle pants, especially President Obama.

You never know who you’ll meet along the cart path!