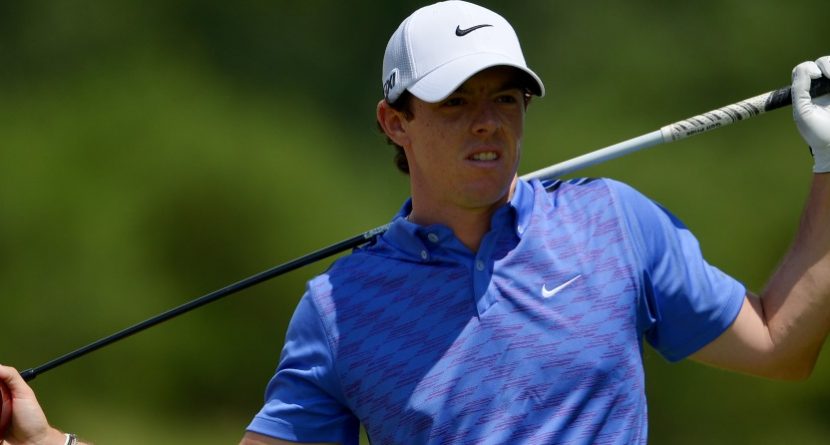 Arnold Palmer, whenever you’re ready, feel free to chime in on Rory McIlroy’s struggles. It seems as if you’re about the only legend of golf who hasn’t already done so.

Add Gary Player to the list of advice givers, as the nine-time major winner from South Africa voiced his opinion to My Sporting Life in the UK. Player emphasized the importance of finding the right wife, and didn’t indicate that Caroline Wozniacki, McIlroy’s tennis-playing girlfriend, fit that bill.

“When you’re in love as a young man, naturally, golf seems to take second place for a while. And that’s natural. Love is still the greatest thing that ever happened in our lives. He’ll come back strong,” Player said. Critics have blamed McIlroy’s fall from world No. 1 all the way to No. 3 primarily on his relationship with Wozniacki or his new clubs and $250 million contract with Nike, or both.

Six-time major winner Nick Faldo implied the former when he said McIlroy needs to treat golf like a job.

“The most ideal thing is to go to the club, 9 in the morning, hit balls all day long, and you leave at 5,” he said. “Concentrate on golf, nothing else. Hopefully when you retire, in your 40s or 50s, hopefully you have another 40 years to enjoy it. So just concentrate on golf.”

Eighteen-time major winner Jack Nicklaus mentioned Nike but also too much time away from golf.

“Rory McIlroy’s won two major championships and the demands on his time have become very high. Nike’s given him a huge contract. Financially, he’s set for life. He has major championships for life. But I don’t think that’s what satisfies Rory McIlroy. He’s been doing, sort of, other things, and now he’s back wanting to play golf again and he’s struggling. And I think he’s struggling because I think it’s in between his head. He just hasn’t got it back into his head. Because before he was grinding, grinding, grinding to get where he wanted. Now all of sudden he’s had a little bit more (leisure) and he’s got a little bit less pressure. You need the pressure. I think it’s great to have the pressure.”

“I think he’s in love for the first time. It’s a wonderful feeling, and it’s distracting. Then I would say it’s one thing to change your driver or wedge, but you’re asking for huge trouble when you change all your clubs and your golf ball at the same time. …His 9-iron and wedge have been really horrendous, and he just lost the magic with his putting. He’s hit the grand slam of things you have to watch out for when you’re at the top. He’s a bit of a mess.”

“He’s too talented not to find it,” Miller continued. “But when you sign a contract like that (with Nike) and you’re that set for life, a signal goes on in your head: ‘I’ve got it made.'”

Other Hot Links:
– 5 Questions with William McGirt
– Back9 in 90: Special Delivery
– Top 5 Songs of the Summer