Another Injury Keeps Tiger Woods Out of Another Major 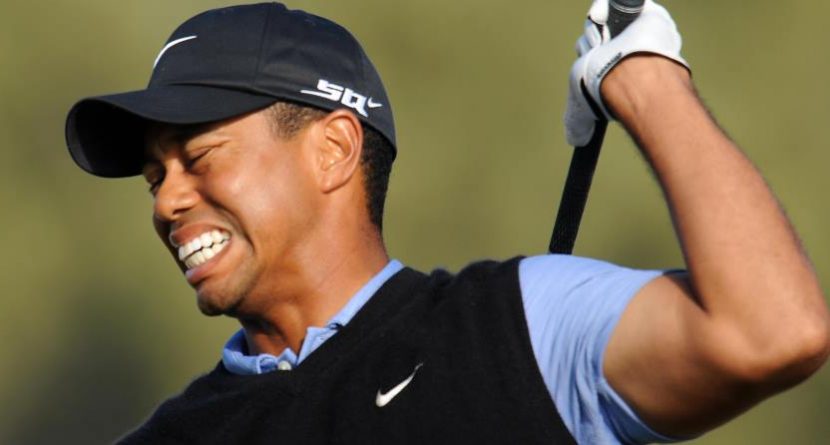 And so the news no golf fan wanted to hear came down on Tuesday: Tiger Woods will miss the Masters. His aching back underwent surgery, leaving him in rest-and-recovery mode for the rest of the month.

It marks the first time in his career that he’ll miss the Masters, the major at which he’s enjoyed the most success. He’s won four times, finished in the top four six other times, and earned 13 top-eight finishes overall in 19 career appearances.

Unfortunately, missing the Masters means the 38-year-old Woods will now have missed each of the four majors at some point in his career due to injury. Sadly, it appears as if he’ll also accomplish that feat this year alone; the recovery time for this back surgery is typically at least four months. Previously, Woods had never missed more than two majors in any one season. Here’s a look back at the majors he’s skipped because of injury:

U.S. Open
Woods made his U.S. Open debut in 1995. The 19-year-old withdrew during the second round after suffering a wrist injury, but he started the next 15 U.S. Opens, collecting victories in 2000, 2002 and 2008 (his most recent major title). His streak came to an end in 2011, when he didn’t compete due to lingering pain in his left leg. Woods was recovering from injuries to his left knee ligaments and left Achilles tendon, and they also kept him out of the 2011 Open Championship.

PGA Championship
That ’08 absence from the PGA Championship was Woods’ first since his 1997 debut in the event. The 1999 edition of this tournament marked his second career major, and he went on to defend that title in 2000. Woods went back-to-back again in 2006 and ’07 before having to sit out in ’08. He did manage to compete in the PGA Championship during that injury-plagued 2011 season, but he was 10-over par after two rounds and didn’t make the cut, the first time he ever missed the cut at the PGA Championship.