Another Week, Another Ace, Another Car For LPGA’s Danielle Kang 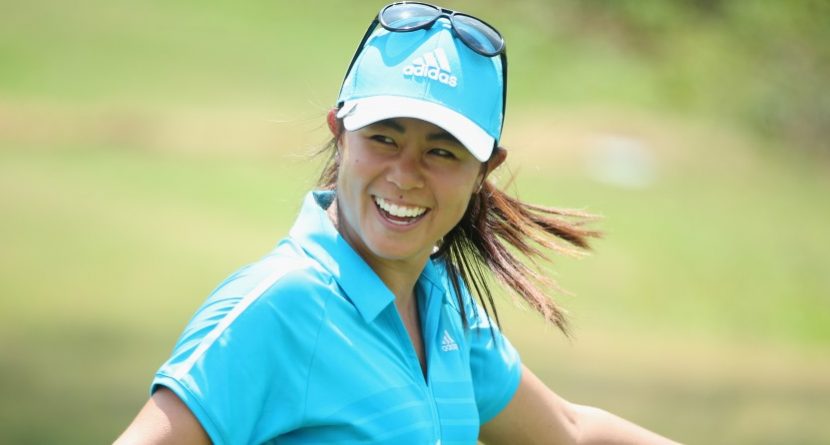 Most professional golfers, if they need a new car, wait until after they win a tournament. Or pile up a bunch of top-10 finishes, accumulating a good pile of cash.

Danielle Kang is not most golfers. She just goes out and wins cars.

The 22-year-old, whose birthday was last week (Oct. 20), now has zero career wins, four career top-10 results, and two new automobiles. She won her second car in as many tournaments on Friday, when she clubbed a 7-iron and sank a hole-in-one on the 158-yard 17th hole during the Fubon LPGA Taiwan Championship. The prize for anyone draining an ace on that par 3 was an Audi A6 T2.0.

#Audi A6 T2.0 welcome to the Kang Family Two cars, back to back weeks. Dad I’ll give this one to Alex 🙂 @Audi #17 pic.twitter.com/eksENua9GY

(Alex would be her brother. What a great sister!)

And this comes after Kang collected a Buick Lacrosse last week in the first round of the Blue Bay LPGA, using an 8-iron on the 155-yard 17th hole:

Considering both of these took place on a 17th hole, you might think that 17 is her lucky number – and you’d be right. Check out the ball she used Friday:

Do you guys want to know what golf ball I use? @TaylorMadeGolf Tour Preferred X #17 My special number #whatsyours? pic.twitter.com/2aQdeNNmtj

“I was actually thinking about a hole in one, because I’ve been touching that car, I really wanted the car,” Kang said afterward. “It was a right to left. So I wanted to aim a little right of it but then I caught it okay, and then it hit the fringe, like the collar, and it just kicked straight in and just rolled, tracked all the way into the hole.”

This marks Kang’s third (!) ace this season on the LPGA Tour, and she actually hit another one this year (!) in a practice round. That makes eight holes-in-one in her lifetime, half of which have come in 2014.

Friday’s ace came in front of some fellow players who, you might imagine, were a bit jealous.

“There was some swear words in there,” Kang joked. “It was pretty awesome. My friend, Lizette Salas, was in the back, and everyone was saying:  ‘Are you kidding me? Again? Another car?’ And everyone is saying they wanted the car. It’s an Audi 6, I was like, okay, that’s pretty awesome.”

Some competitors also let Kang know how they felt on Twitter:

@daniellekang you need a bigger garage! You go girl!

@LPGA @daniellekang are u freaking kidding Me? Go to the casino to place some bets girl….

I would like my twittersphere to know that @daniellekang won a car last week for a hole in one…And again today. 2 for 2. Comprehend that.

More Hot Links:
– Driving Range: Car Gets Pelted At TopGolf in Houston
– 9 Best Golf-Themed Pumpkin Carvings
– The Fringe: Gary Player Could Fix Tiger’s Swing In One Hour
– The Turn: Back9Network Tears Up The BMW Racetrack
– Is A Tandem Bike Vs. BMW i8 A Fair Race?
– This Double Putt Is Another Short Putt Made Hard
– Video: ‘It’s Anyone’s Game’ Inspires Everyone To Play Golf