Arnold Palmer Appearances At Bay Hill To Be Scarce 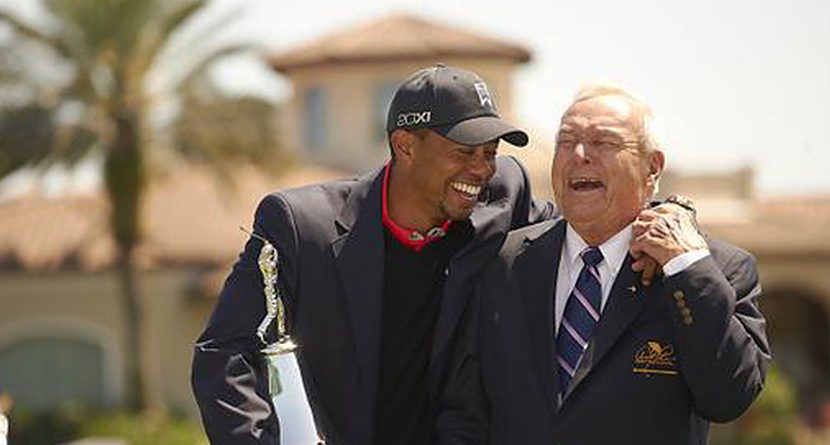 At 86 years old, the King is starting to slow down.

The familiar visuals of Arnold Palmer moving about his property at Bay Hill next week will be fewer and farther between, according to a report from ESPN.com’s Jason Sobel who talked with Palmer’s grandson, Sam Saunders, on site at this week’s Valspar Championship in Palm Harbor, Fla.

“It’s a very busy week; there’s a lot of stuff going on,” said his grandson Sam Saunders, who is also a PGA Tour member. “It’s tiring for me and I’m 28 years old. At 86, he’s doing OK, but I think his availability to get out and be on the course and be seen as much will be limited. But I know he’ll still have a huge role.”

For years, Palmer has hosted a Wednesday pre-tournament news conference with the assembled media at Bay Hill, site of his Arnold Palmer Invitational. That won’t happen next week, replaced instead by a private question-and-answer session that won’t be in front of any cameras.

He will, though, still be on site throughout the tournament.

“But whether he’s able to be there in person for some of these moments or not, it doesn’t matter. He’s still the focus. We all know what he’s done and who he is. Whether he can physically be there or not, he’s still always going to be there.”

Palmer has been slowed in recent years due to health problems that have ranged from having a pacemaker implant procedure in 2014 to a dislocated shoulder as a the result of a fall in the build up to last year’s Bay Hill event. Ever the showman, however, Palmer recovered and hosted the event with aplomb in both instances.

Unfortunately, this year seems to be the beginning of the end for Palmer as an effervescent host. As Saunders said, hopefully the buzz and presence of the game’s best reignites Palmers’ fervor. If that fails, maybe Kate Upton can fly in to give the King a pick-me-up.