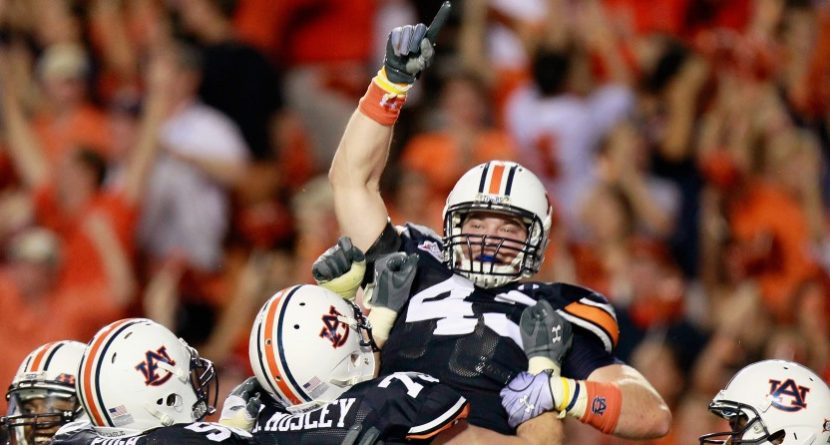 Former Auburn tight end Philip Lutzenkirchen died last month in a car accident in Georgia, and was honored by Auburn alum Jason Dufner last week at the Open Championship. The Duf Daddy played with a patch on his golf bag commemorating his friend.

This week, the memory of Lutz was at the forefront of another golf event. Prior to the 50th anniversary banquet on Thursday night for the Auburn chapter of the Fellowship of Christian Athletes, the FCA and Auburn University Club hosted an 18-hole golf outing in honor of Lutz at the Auburn University Golf Club. Proceeds from the event, which featured 60-70 golfers, will benefit the Auburn FCA, an organization Lutzenkirchen had been involved with since high school.

The outing was arranged in less than two weeks, with most of the work done by Lutz’s father, Mike, and a former Tiger, Will Herring, who now plays for the New Orleans Saints. The latter often played golf with Lutz, though not very well.

“We hung out more in the woods than probably on the fairway,” Herring said. “Neither one of us could play golf but we had a good time doing it.”

Dufner was unable to attend, but did his part earlier this week to encourage others in the Auburn area to show up:

If you have the time and the means come support a great event Thursday in Auburn. pic.twitter.com/CjnVSaUUIZ

Auburn head coach Gus Malzahn was on hand but didn’t play. Among those who did hit the links were women’s golf coach Kim Evans and former players Jorrell Bostrom and Trent Fisher, and current players Reese Dismukes and Mack VanGorder.

“This is another hurdle our family is going through,” Mike Lutzenkirchen said. “Each day gets a little bit easier but this turnout is just amazing.”