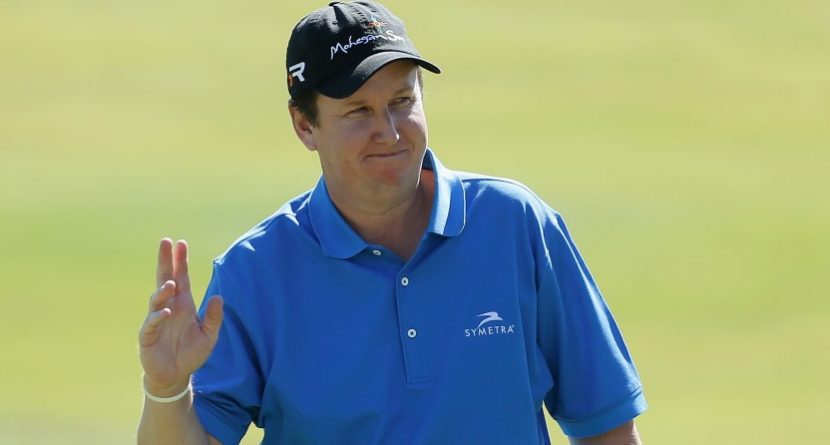 Back9 ambassador J.J. Henry thought he played well over his first nine holes Thursday at the Shriners Hospitals for Children Open in Las Vegas. Then he made the turn.

After starting on No. 10 and carding four birdies in his first eight holes, Henry collected five birdies on the back nine – and an eagle on No. 9, his final hole of the day. That all added up for an 11-under round of 60. The 38-year-old will take the lead into round two, albeit only one shot over Argentina’s Andres Romero.

That 60 became reality when Henry sank a 50-foot eagle putt to close out his round. It not only gave him a career-best round; it also lowered the course record at TPC Summerlin. “It was one of those days,” Henry told the PGA Tour afterward. “There wasn’t much wind and the greens were pretty soft. It was nice to make that putt on the last hole to make lunch taste that much better.”

“Any time you start with the round I had, it gives you a lot of confidence for the rest of the week,” Henry said.

Six strokes behind Henry in 13th place overall in Vegas was another Back9 ambassador, Ricky Barnes. He managed six birdies and a bogey on the day to finish with a 5-under 66. Barnes was 7-under last week at the Frys.com and tied for 33rd.

Barnes competed in 26 PGA Tour events during the 2013 season and was in jeopardy of losing his card, but the 32-year-old earned $34,750 during the Web.com Tour Finals, enough to secure his card for the 2013-14 season.

Other Hot Links:
– Phil Mickelson Can School You Lefty or Righty
– Tim McCarver Fails in Dissing Hunter Mahan
– Does It Drive: Trial by Fire