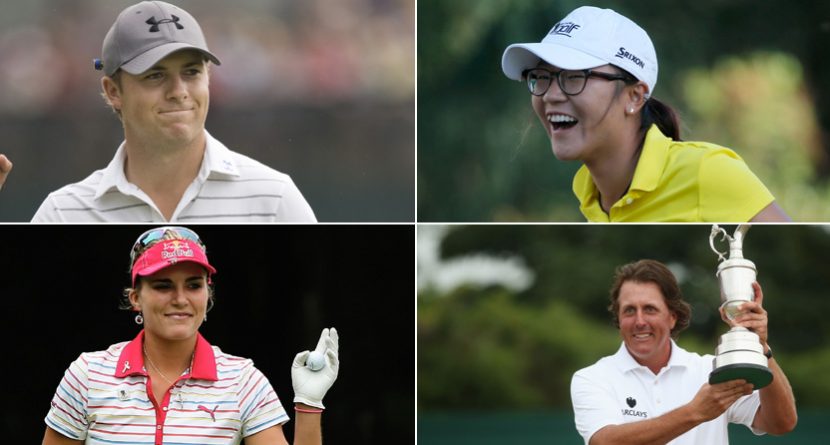 The task: Sum up the year of 2013 in golf and look ahead to 2014. Who better to accomplish such a feat than the people who played in or worked around the pro levels?

Pumarol: Phil winning the Claret Jug. Even he said it, “I thought I would never win this tournament.”

Adams:  To me, the story of 2013 was one of “redemption.”  Adam Scott wins the Masters after his collapse at Royal Lytham and St. Anne’s; Justin Rose wins the U.S. Open at historic Merion, the pinnacle of professional success after having emerged from lowest valley of professional despair of 21 straight missed cuts when he turned pro; Phil Mickelson wins the Open Championship at Muirfield only a month after telling the world that his sixth second-place finish at the U.S. Open was his “biggest heartbreak;” and Jason Dufner wins the PGA Championship at Oak Hill – the same tournament that slipped through his grasp at Atlanta in 2011.

Phil Mickelson with the Claret Jug.

2) Which player was the biggest surprise?

Pumarol: Jordan Spieth. A lot of talent and proof. Played awesome this past season.

Adams: Jordan Speith.  From starting the season with no status on the PGA Tour to being in the mix at the FedEx Cup.

McGirt: Finishing runner-up in Canada for the second straight year.

Pumarol: My second hole-in-one – 185 yards with 14 miles of crosswind (right to left) and I hit a perfect 5-iron with a lil’ fade to hold the wind, and the ball just disappeared.

Adams: Bringing Ben Hogan’s original 1-iron back to the exact spot that he last used it 63 years and a day before, in the final round of the 1950 U.S. Open at Merion (which Hogan would go on to win the next day in a playoff – without his heroic 1-iron, as it was stolen from his golf bag on the night after the famous photo was shot and it remained lost for the next 30+ years).

Remy: Got to do interviews at the PGA Championship for Back9Network.

Pumarol: Stenson was very fun to watch and see how crazy golf is. Two years ago the same guy was breaking clubs and missing the cut anywhere.

Adams: Cannot narrow it down to one…

Remy: No question, even though he didn’t have his best year. Best guy on Tour! Padaig Harrington.

5) What was your favorite new club of the year?

Pumarol: I liked the new Futura X putter by Scotty Cameron. Have it on my bag.