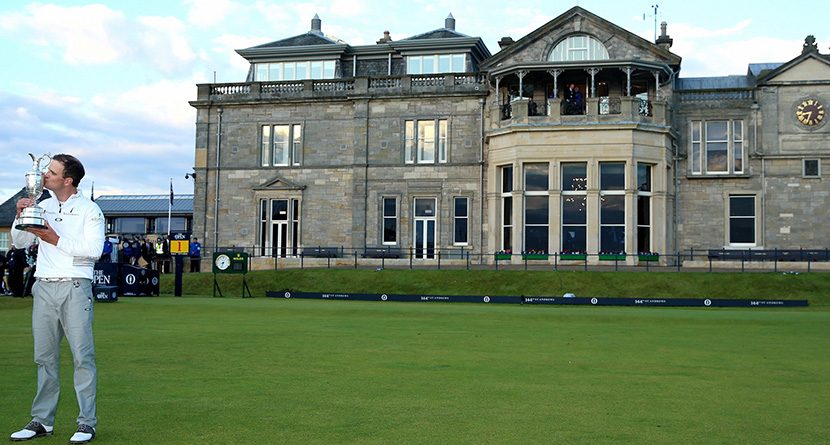 With less than 10 days remaining in 2015, golf.swingbyswing.com is counting down the top-10 golf stories of 2015, one per day until New Years Eve. The stories’ place on this list are a result of a criteria set forth by the writer based upon the impact each had on the golf world this year. Here, at No. 3, Zach Johnson Wins The Open Championship.

In a season of great tournaments, none came with as much built up hype and anticipation as the Open Championship being played at the Old Course at St. Andrews. In fact, a number of the biggest storylines of the year converged on the Auld Grey Toon, including a few yet to be revealed (spoiler alert!).

Even with Rory McIlroy sidelined with his ankle injury, the third major of the year had added significance because Jordan Spieth had claimed the first two of 2015. Honoring his commitment to play in the John Deere Classic the week before the Open, Spieth flew into Scotland early Monday morning to get his first look at the Old Course in person.

Jordan Spieth is playing St Andrews on his simulator to prep for #TheOpen. http://t.co/ldAajjiHRJ pic.twitter.com/psKMDBcOJy

Spieth wasn’t the only compelling storyline ahead of the tournament, however. Dustin Johnson was making his first start since his 72nd hole three-putt at the U.S. Open cost him a chance to win or force a playoff at Chambers Bay. And the Old Course was, once again, a perfect fit for DJ’s game given his length off the tee.

Indeed, St. Andrews’ generous landing areas off the tee made bombers popular picks coming into the week and a look back at the final leaderboard bears out that same theme, with the exception of the guy at the top.

Zach Johnson opened the week at 80/1 to win his second major championship, but an opening-round 66 moved ZJ one shot back of DJ. A second-round 71 kept Johnson in the hunt, but heading into the weekend he was four back of the other Johnson, a much sexier storyline given DJ’s collapse at Chambers Bay a month prior.

Moreover, the weather that derailed Saturday at the Open and forced a Monday finish became as big of a storyline as who was going to win the tournament. Fighting through a third-round 70, Johnson was still within striking distance, but not the name many expected to emerge from a congested leaderboard to fire a final-round 66, earning his spot in a three-man playoff that didn’t include Spieth.

Johnson, who’s first major win came at the 2007 Masters, became only the sixth golfer in the history of the game to win majors at both Augusta National and St. Andrews.

A contrarian to the common belief that you needed to be a big hitter to win at St. Andrews, Johnson took a similar approach at the Home of Golf to what earned him a green jacket eight years prior. Johnson wedged and putted the Old Lady to death, edging Marc Leishman and Louis Oosthuizen in an anticlimactic playoff.

Johnson’s improbable and history-redefining win was just another piece in the golfing fabric of 2015. From the sheer magnitude of the accomplishment to the impact it had on derailing Spieth’s quest for the Grand Slam, Johnson’s win at St. Andrews was one of the biggest stories of the year.