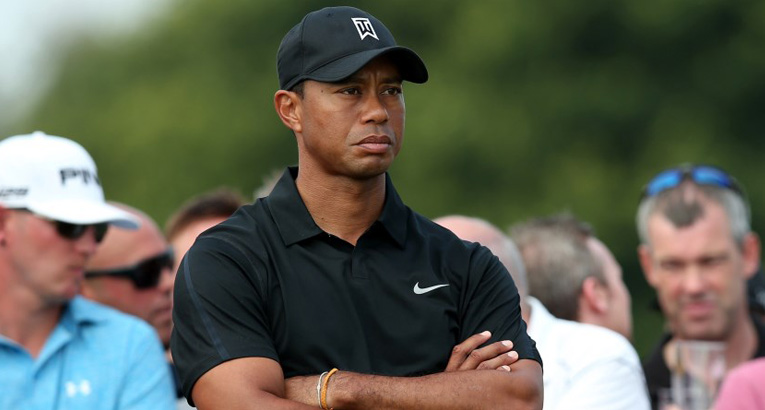 With less than 10 days remaining in 2015, golf.swingbyswing.com is counting down the top-10 golf stories of 2015, one per day until New Years Eve. The stories’ place on this list are a result of a criteria set forth by the writer based upon the impact each had on the golf world this year. Here, at No. 4, Tiger Woods’ Lost Season.

You didn’t think we were going to get through this list without getting into what went down with Tiger in 2015, did you?

Tiger Woods is the needle, plain and simple. As much as self-proclaimed and self-righteous “true golf fans” like to get on their high horses and discredit Woods’ stature in the game, the fact of the matter is that he is still the biggest draw — for tournaments, for television, for clicks — in the game, bar none. And 2015 was one of the most interesting years in Woods’ two decades in the professional game.

While the allure of his season was more about what Woods didn’t or couldn’t do — win, chip, swing — it still made for interesting conversation fodder. We can practically go month-by-month with a new storyline that dominated the golf news cycle, so let’s do just that.

Coming off of the debacle at the 2014 Hero World Challenge at Isleworth in which Woods showed his first signs of the chipping yips, Woods sent the golfing world into full-blown DEFCON 5 at the Waste Management Phoenix Open. Before the event even began, Woods nearly knocked the Otterbox off of cell phone-wielding fans at the 16th hole when he bladed a bunker shot into the grandstands, a shocking harbinger for what was to come that week and truly, this past year.

Woods shrugged off the bunker shot as a purposeful gag, but a 73-82 trunk slam told another story.

Back on Tour a week later at the home of his last major triumph, Woods again made headlines for the wrong reason, withdrawing after 11 holes.

Famously, Woods spoke to the media in the parking lot explaining that he couldn’t “activate his glutes.”

That would be the last we would hear from Tiger for weeks, with speculation now centered around whether or not he would be able to play in the Masters in two months.

After a month of radio silence, Golf Digest’s Tim Rosaforte reported that Woods had been playing around his home course of Medalist, allegedly shooting a worst-ball 66 and gearing up for the Masters. The worst-ball 66 was debunked by Woods later, but the thirst for an update was evident in the build up to the first major championship of the season.

As the days to the Masters wound down, the question of whether Woods would play or not ratcheted up. His plane had been spotted in Augusta during the final week of March, but no one knew the result of his scouting trip until Woods ended the speculation himself.

I’m playing in the Masters. Thanks for all the support. http://t.co/SYih4eSxUa

And he actually played well. Woods acquitted himself nicely around the tricky Augusta National greens, finishing in a tie for 17th, showing signs that he wasn’t finished after all. At least for the time being.

Teeing it up at the Players Championship in May, an event Woods has a precarious history in, he was again relegated to a side-show, making a putt on the 36th hole to make the cut on the number. Rounds of 73-71-75-72 left him in a tie for 69th and decidedly inconsequential to Rickie Fowler’s breakthrough. A silver lining, if there was one, was that Woods had finished four rounds in consecutive tournaments for the first time in nearly two years.

If Tiger finishes round, this would be 1st time TW has completed final round in cons. official PGA Tour starts in 596 days.

If there was a rock bottom for Woods, it came, cruely, at Jack’s place: Muirfield Village Golf Club. Playing in the Memorial Tournament Woods again fought to make the weekend, needing to sink a putt on the 36th hole to make the cut. With two more rounds guaranteed, Woods looked more lost than ever with his Chris Como-tweaked swing over the final two days of the tournament, firing a career-worst 85 on Saturday and finishing in dead last among those making the weekend.

Two weeks later at the U.S. Open, it wasn’t any better. An opening-round 80 effectively ended his week before it started.

His season in a microcosm:

In July, the rollercoaster season continued. Adding a start at Greenbrier, Woods shot three of four rounds in the 60s, ending with a 67 to finish in a tie for 32nd. Saying all the right things, Woods headed for St. Andrews, the Old Course and his third major of the season.

Yet, from the first hole — where he chunked his opening tee shot and dumped his approach into the Swilcan Burn — Woods was destined for a short week. He fired a 76 on Thursday, his worst opening round in an Open and backed it up with a 75 to miss the cut comfortably.

Oh no Tiger. Half missed his opening tee shot then this. Hope he can settle down.

Another step back at the Open was buttressed by a glimmer of hope at the Quicken Loans National the following month where Woods again shot three rounds in the 60s. He finished T18 and headed to the PGA Championship. Alas, another two and out was ahead at Whistling Straits.

The last glimmer of hope for 2015 came at the Wyndham Championship, a new event for Woods. Opening with 64-65, Woods was in contention heading into the weekend only to limp in with 68-70 to finish tied for 10th, ending his season.

His second back surgery.

Just had successful back surgery. I’ve come back from injuries before and I will again. http://t.co/jZeL6By5EY

His third back surgery.

Had a follow-up procedure on my back as the next step in my recovery. Staying strong & patient. https://t.co/ZAlbOEYGVE

With no timetable for his return to golf, Woods was named an assistant captain for the 2016 US Ryder Cup team. A good thing, maybe?

Excited to join @Love3D, the other VCs & @RyderCupUSA as a Vice Captain, and help #TeamUSA get a victory in 2016: https://t.co/p5wzvoyOYI

In Albany for the Hero World Challenge and facing his 40th birthday, we find Woods a far cry from the man we saw even months prior at the Masters.

A tumultuous year for Woods comes to an end next week with 2016 as uncertain as the nerves in his back. Regardless of what the next 12 months bring for Woods, we’ll be there, waiting. Whether or not you want to admit or not.