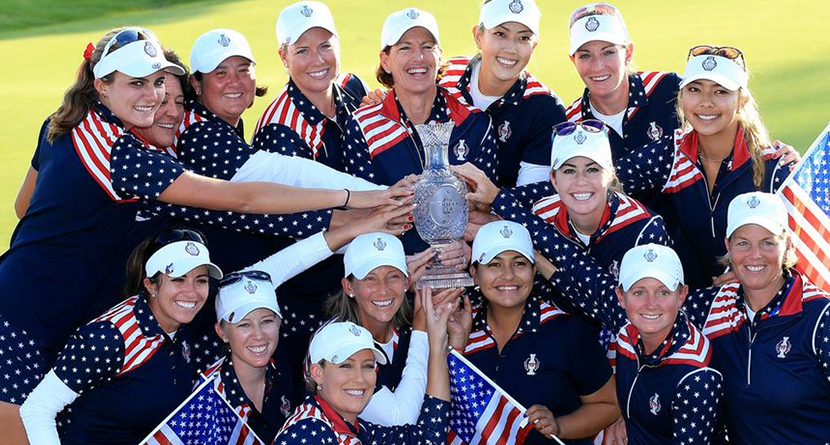 With less than 10 days remaining in 2015, golf.swingbyswing.com is counting down the top-10 golf stories of 2015, one per day until New Years Eve. The stories’ place on this list are a result of a criteria set forth by the writer based upon the impact each had on the golf world this year. Here, at No. 5, The United States’ Comeback Solheim Cup Win.

In non-Ryder Cup years, the Presidents Cup or Walker Cup usually claims the majority of the headlines as far as international team competitions go, but in 2015, no team event had the drama, controversy or final-day theatrics of the Solheim Cup.

Among the three main professional biennial events, the Solheim was already the most evenly contested in recent years with the United States and Europe both having won four a piece since 2000. But 2015’s Cup would elevate the women’s answer to the Ryder Cup to a new level.

Allison Lee’s incorrect picking up of her par putt on the 17th hole against Suzann Pettersen and Charley Hull cost the U.S. the hole and eventually, the match. More than anything, what it did was give the American’s something to rally around. Even with Lee and Brittany Lincicome losing a point, the fourth session matches were split, 2-2, giving the the U.S. an outside chance of a Sunday afternoon comeback, a la the Miracle at Medinah.

Actually, it was almost exactly like the Miracle at Medinah, just with the script flipped. Trailing 10-6 and needing 14½ points to win the Cup, the U.S. had one of the most improbable Sunday comebacks in the history of international team competition.

The Europeans needed to find four points out of the possible 12 up for grabs, but could only manage 3½ and the American celebration was on.

The aftermath of the Cup was dominated by talk of the non-concession by Hull and Pettersen. Pettersen, the veteran in the European pairing, was painted as the villain, despite no wrong-doing by the letter of the rules. The spirit of the rules, however, is where opinions differ. Pettersen defenders say that Norweigen was playing by the rules, while her detractors argue that the correct thing to do in that situation was give the putt, halve the hole and move onto the 18th all square.

In truth, the shot of controversy was precisely what the event needed from a global golf perspective. The game, especially as it pertains to viewership and sponsorship dollars, is dominated by the male tours and events. More eyeballs were brought to the Solheim Cup this year because of Gimmegate. It created a dialogue among professionals, amateurs, pundits and casual fans alike, all of which equaled out to one thing for women’s golf: exposure.

With many of the major players from the 2015 Solheim Cup competing on the LPGA Tour on a weekly basis, the event was far and away the most important women’s golf event of 2015.