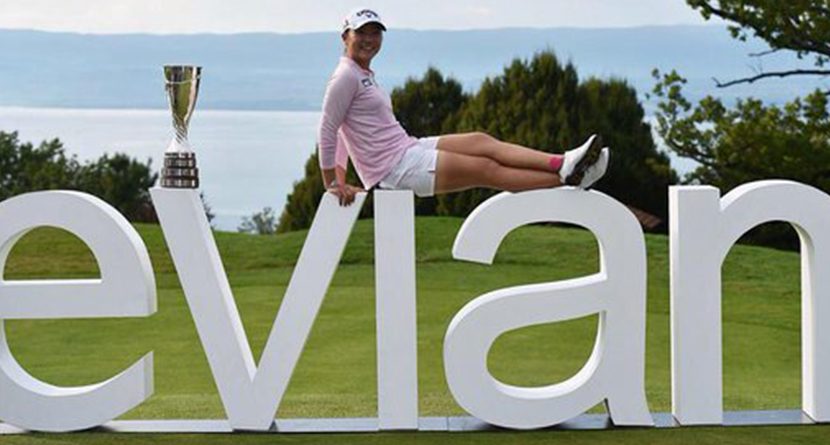 With less than 10 days remaining in 2015, golf.swingbyswing.com is counting down the top-10 golf stories of 2015, one per day until New Years Eve. The stories’ place on this list are a result of a criteria set forth by the writer based upon the impact each had on the golf world this year. Here, at No. 6, Lydia Ko’s ‘Major’ Season.

The New York Times’ golf writer, Karen Crouse, suggested earlier this year that the LPGA Tour get rid of the books in which they keep their records. Instead, she wrote, they should opt for a whiteboard because 18-year-old Lydia Ko is seemingly rewriting the Tour’s records weekly.

In 2015, the South Korean-born New Zealander kept up her torrid pace winning five times on the LPGA Tour, including her first major at the Evian Championship, where she became the youngest major champion in LPGA history at 18 years and four months old.

Beyond becoming the youngest major champion ever on the LPGA Tour, Ko’s age was only beaten by one person in the history of the game: Young Tom Morris, who won the 1968 Open Championship over a field of 11 other players. Young Tom took home a nice prize fund of £6 or $8.90 for his feat. Ko won $487,500 en route to topping the LPGA Money List, some $170,000 more than second-place Inbee Park.

The Evian was Ko’s fourth title of the season. When she won the Fubon LPGA Taiwan Classic just over a month later, Ko broke another record: youngest player to win 10 times on any Tour.

And even then, Ko’s 2015 wasn’t finished being written. With the LPGA Tour’s Race to the CME Globe in its second season, Ko had a chance to cash another million dollar payday if she was able to hold off Park at the CME Group Tour Championship. Her track record at the Naples, Fla. based event was strong already.

In winning the 2014 Tour Championship and the Globe, Ko pocketed $1.5 million in tournament and year-long earnings from CME. Finishing T7 at the year-end event in 2015, Ko was still able to edge Park by 300 points despite finishing one shot back of the seven-time major champion in the tournament. Ko cashed $1,042,385 during that week alone.

.@cristiekerr asked “who won the $1 million”, found out it was @LydiaKo & turned to her and said “you’re so rich” pic.twitter.com/Bm8JOkpSAY

Another record-setting year in the books, Ko was selected as the LPGA’s Player of the Year. You guessed it, the youngest PoY in history.