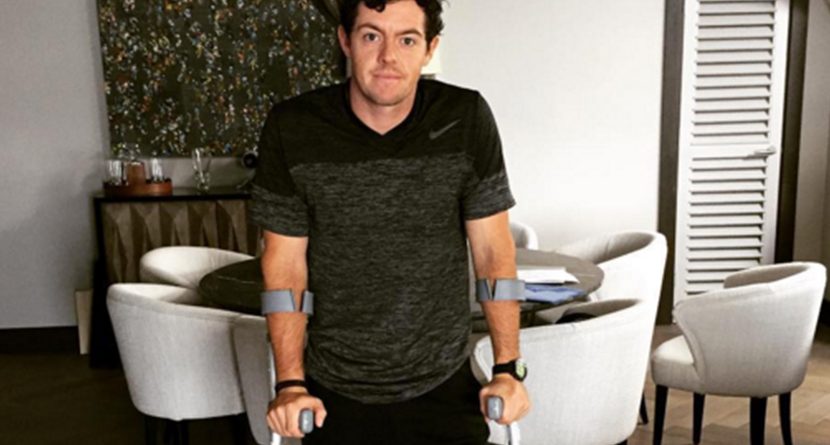 With less than 10 days remaining in 2015, golf.swingbyswing.com is counting down the top-10 golf stories of 2015, one per day until New Years Eve. The stories’ place on this list are a result of a criteria set forth by the writer based upon the impact each had on the golf world this year. Here, at No. 8, is Rory McIlroy’s Soccer Kickabout.

The golf world was introduced to a new term this summer when Rory McIlroy took to Instagram to announce that he had severely injured his left, load-bearing ankle during a soccer “kickabout” 12 days before the Open Championship was set to be contested at the Old Course at St. Andrews.

A three-time winner (Omega Dubai Desert Classic, WGC-Cadillac Match Play and Wells Fargo Championship) and a top-10 finisher in both the Masters and U.S. Open already in 2015, the top-ranked player in the world was heading to a course many pegged as his best fit for major triumph this year. Yet, because of a kickabout with friends, he was, for all intents and purposes, ruled out of the third major championship of the season.

Total rupture of left ATFL (ankle ligament) and associated joint capsule damage in a soccer kickabout with friends on Saturday. Continuing to assess extent of injury and treatment plan day by day. Rehab already started….. Working hard to get back as soon as I can.

Moreover, the defending Open Champion announced that the result of his injury was a “total rupture… and associated joint capsule damage,” forcing doctors, both of the accredited and armchair variety, to weigh in on the possible recovery time of an injury shrouded in mystery and begin a discourse about just how “down to earth” fans should want their sporting heroes to be.

When McIlroy officially announced his withdrawal from the tournament two days later, the vaunted showdown between McIlroy and the winner of the first two majors of the year, Jordan Spieth, was squashed. Instead, what bubbled below the surface of a truly magnificent Open Championship was a hypothetical question of “what if Rory were there?”

After much consideration, I have decided not to play in the Open Championship at St. Andrews. I’m taking a long term view of this injury and, although rehab is progressing well, I want to come back to tournament play when I feel 100% healthy and 100% competitive. Thank you for all your support and best wishes. I hope to be back on the course as soon as I can…. In the mean time, come on Andy!!!

McIlroy kept the world abreast of his improving health over the course of the summer through social media, posting videos of himself working out and hitting golf balls, feeding speculation about his return to the major championship stage at Whistling Straits, where he would tee it up.

With a heavily-taped left ankle, McIlroy showed signs of rust en route to a solo 17th-place finish. As he played himself back into form over the course of the last three weeks of the season, McIlroy left the golfing public with a lingering sense of “what if.” Adding to the revisionist history was the quality of play McIlroy displayed down the stretch of 2015, winning the European Tour’s finale, the DP World Championship as well as the Race to Dubai.

Now, with a lesson learned and a healthy ankle, McIlroy has turned his attention to 2016, where he hopes to challenge World No. 1 usurper Jordan Spieth as well as fellow top-6 players Jason Day, Bubba Watson, Henrik Stenson and Rickie Fowler.